Korlai Fort is located on the Konkan coast, on a hill that juts out into the sea just south of Revdanda. Built in 1521 by the Portuguese as a companion to their stronghold in Chaul, the fort lies at the mouth of the Kundalika river that flows down from the Tamhini Ghats via Kolad. The hill on which it is built is called Morro de Chaul and which now also hosts a well maintained lighthouse.

The route map from Mandwa to Korlai 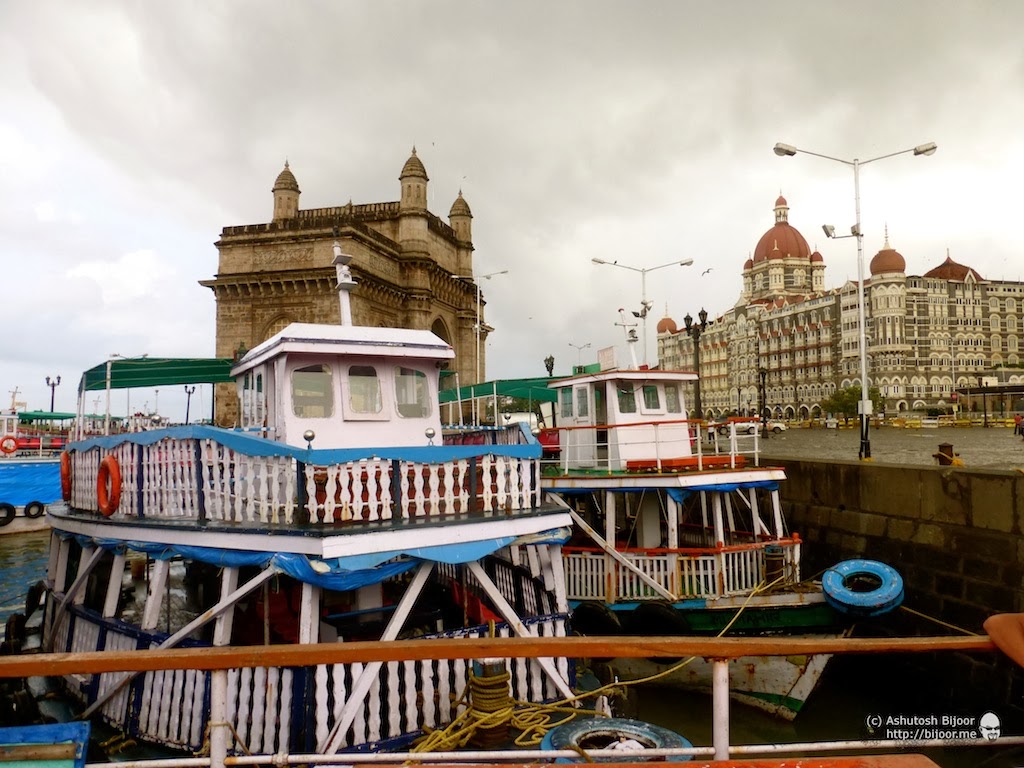 We took an early morning ferry from Gateway of India at 6:15 am with our cycles on board and set off for Mandwa jetty 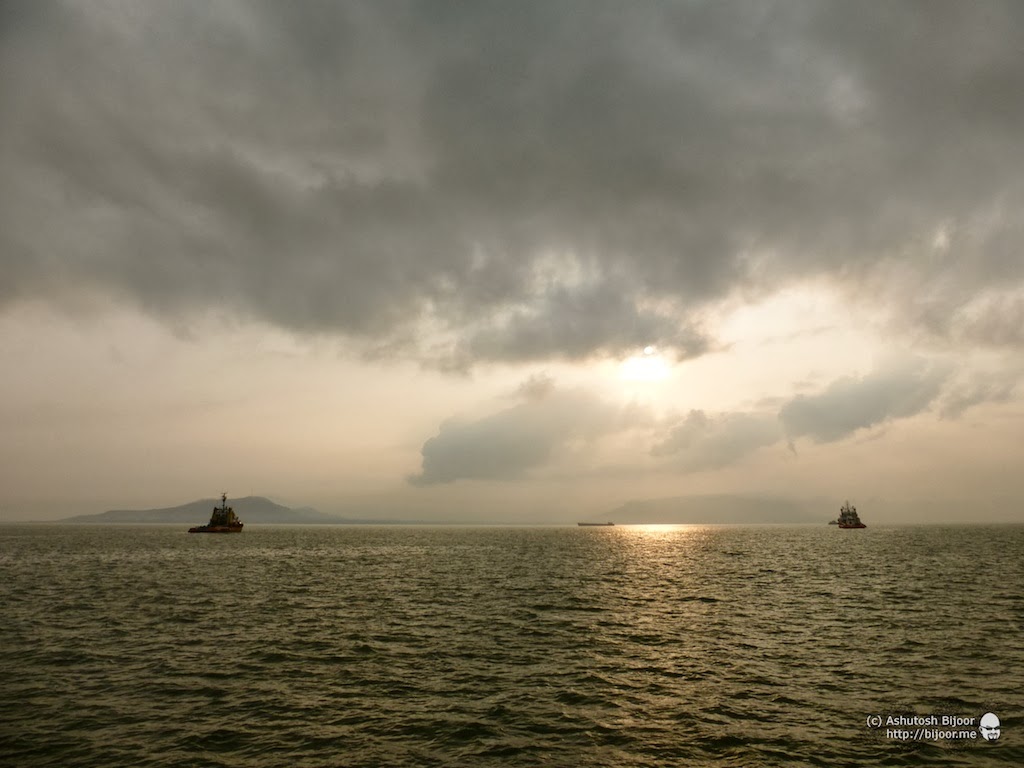 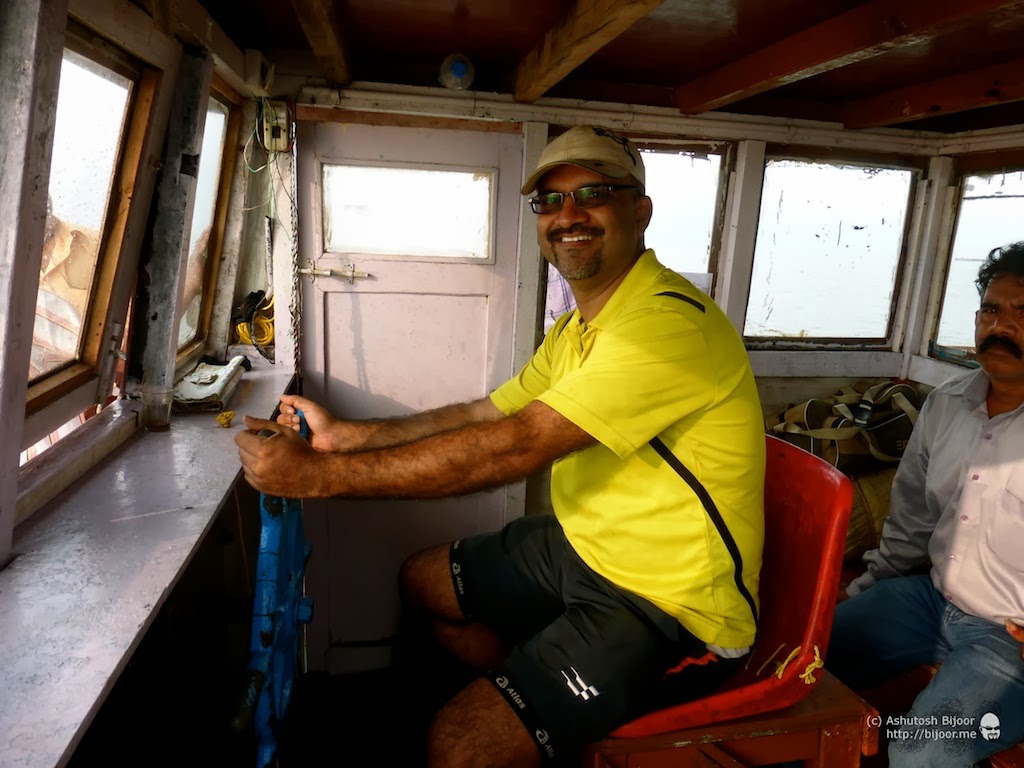 As we neared Mandwa jetty, there was some problem in the engine and we feared that we would get stuck in the middle of the sea. But luckily it got fixed in a short while. I took the opportunity to occupy the driver’s seat and pretended to steer the launch – which did not really impress the other passengers who were anxious about the failed engine 🙂 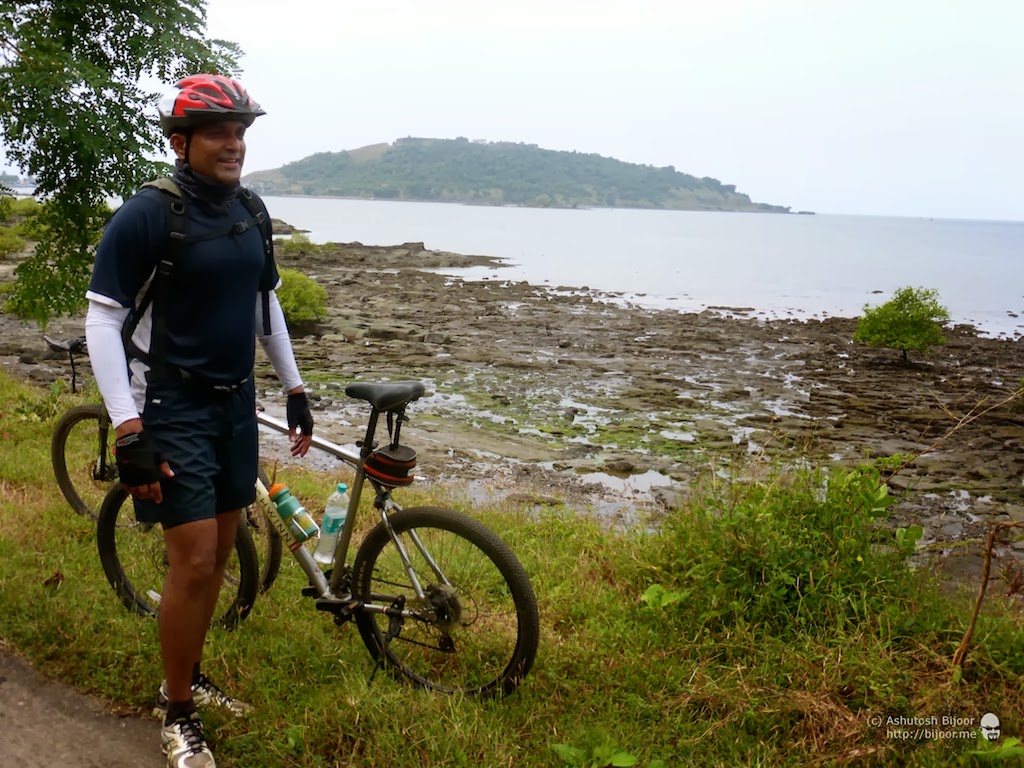 We cycled from Mandwa jetty to Korlai via Alibaug, a distance of just under 42 kilometers and a beautiful route that passes through small coastal villages full of coconut trees. We got hit by a short burst of torrential rain that completely drenched us – but that kept us cool and protected us from the heat of the sun. As we crossed Revdanda through its fortified boundary, we caught sight of the hillock out into the sea – Morro de Chaul 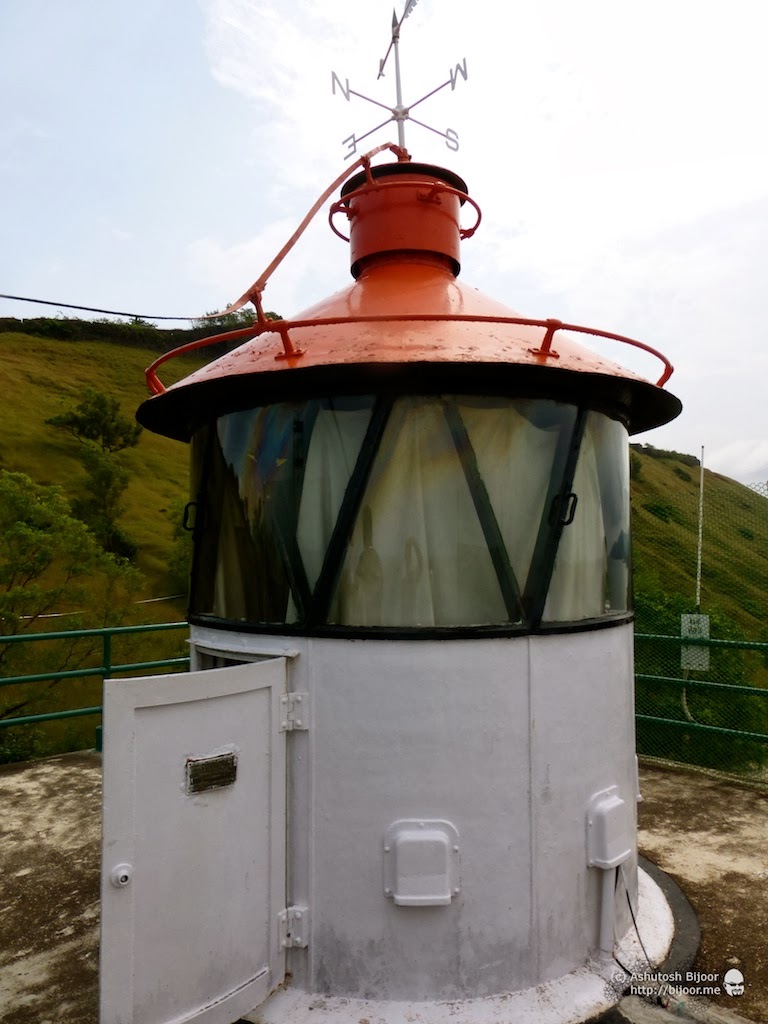 We crossed the bridge and reached the base of the hill where this lighthouse is located. We got a nice introduction to the functioning of the lighthouse by the presiding engineer. Apparently it was thanks to the 26/11 terrorist attack in 2008 that lead to upgrading of all the lighthouses with a really fancy radar with a range of 72 nautical miles that can track vessels far into the sea 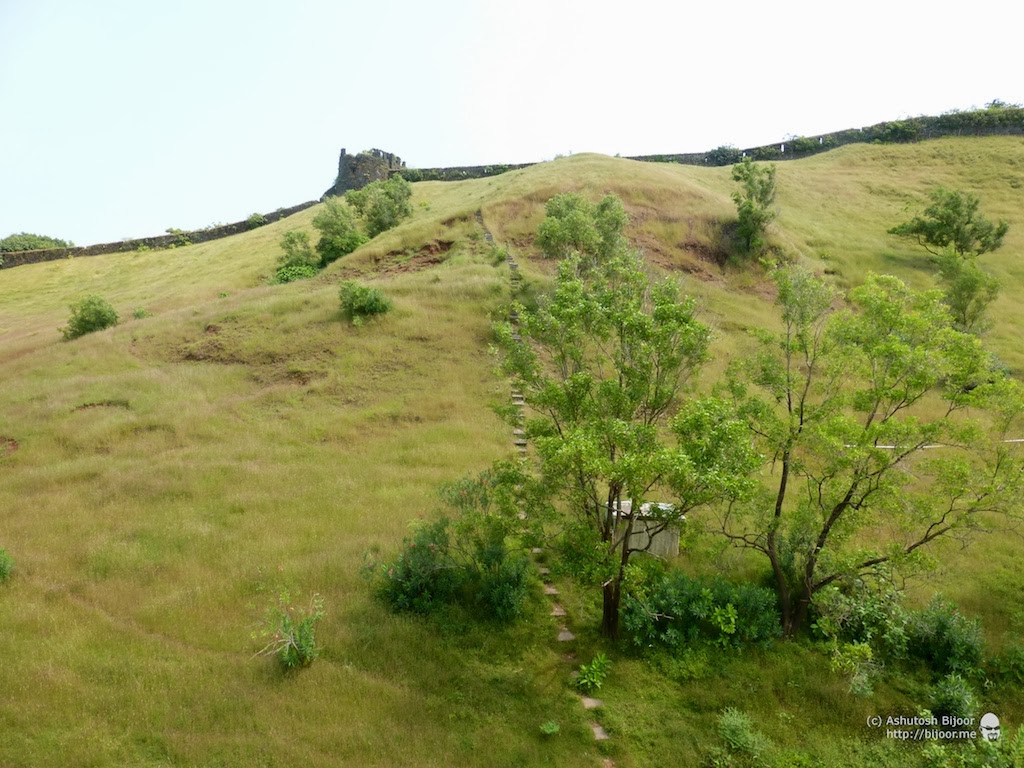 From behind the lighthouse there is a narrow path leading up to the fort. For it was now nice and sunny, we decided to leave our shoes and socks out in the sun to dry and went up the fort barefoot 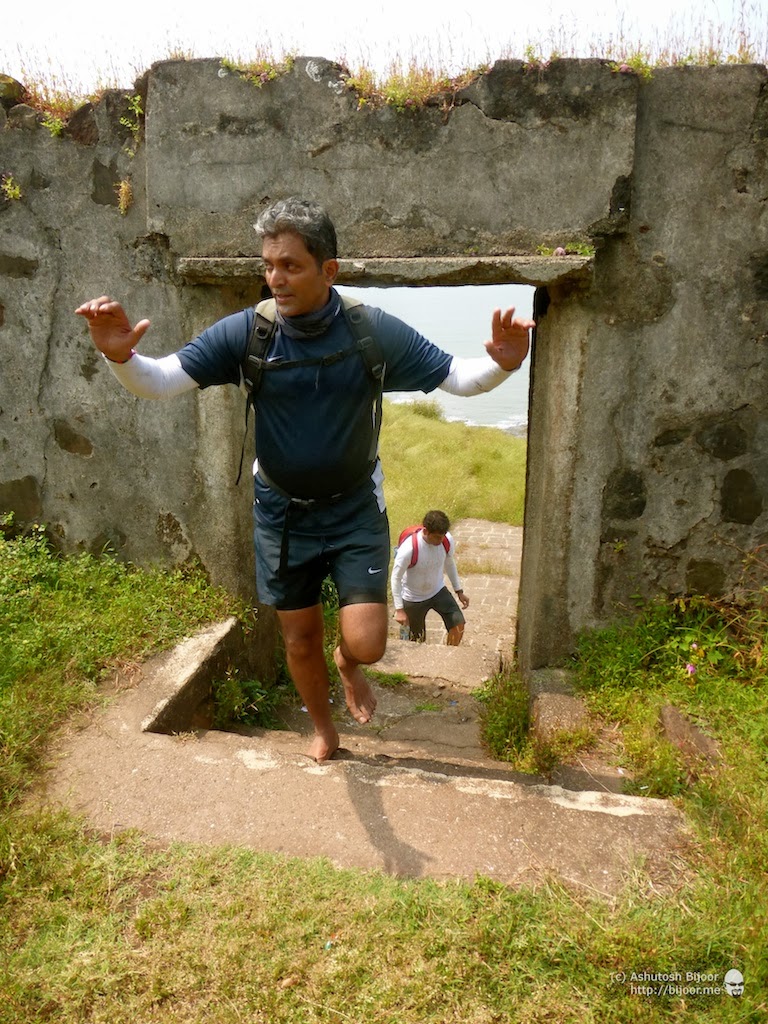 The short walk up to the fort leads you to a small side entrance through which you can enter the ramparts of the fort. The fort snakes its way over the top of the Morro de Chaul hill and is 2828 feet long, with four gates from which you can enter. We had entered from its north west corner. Sameer seems to be imagining a royal reception with his gesture 🙂 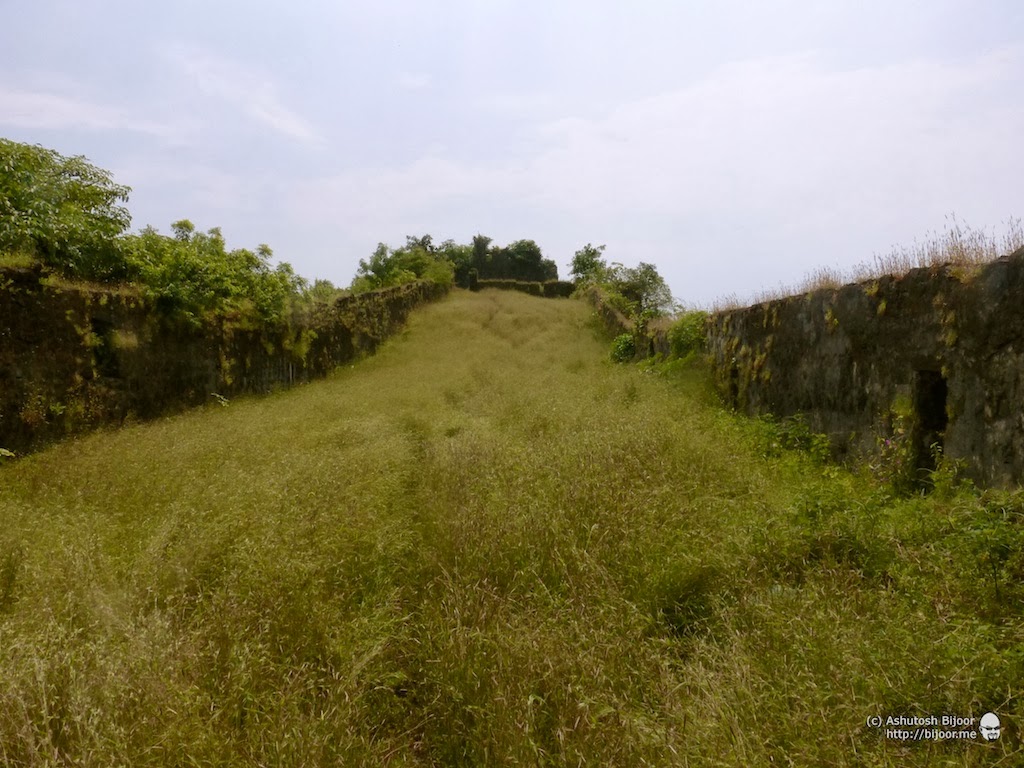 The enclosing wall is about 5 feet high and has battlements all along for guns. The area within the fort walls is divided into three enclosures with seven bastions named after various saints – São Diego and São Francisco are to the north, while São Pedro, São Inácio, and São Filipe are towards the south. However, during the Maratha occupation of the fort (1740-1818) these bastions were given Marathi names 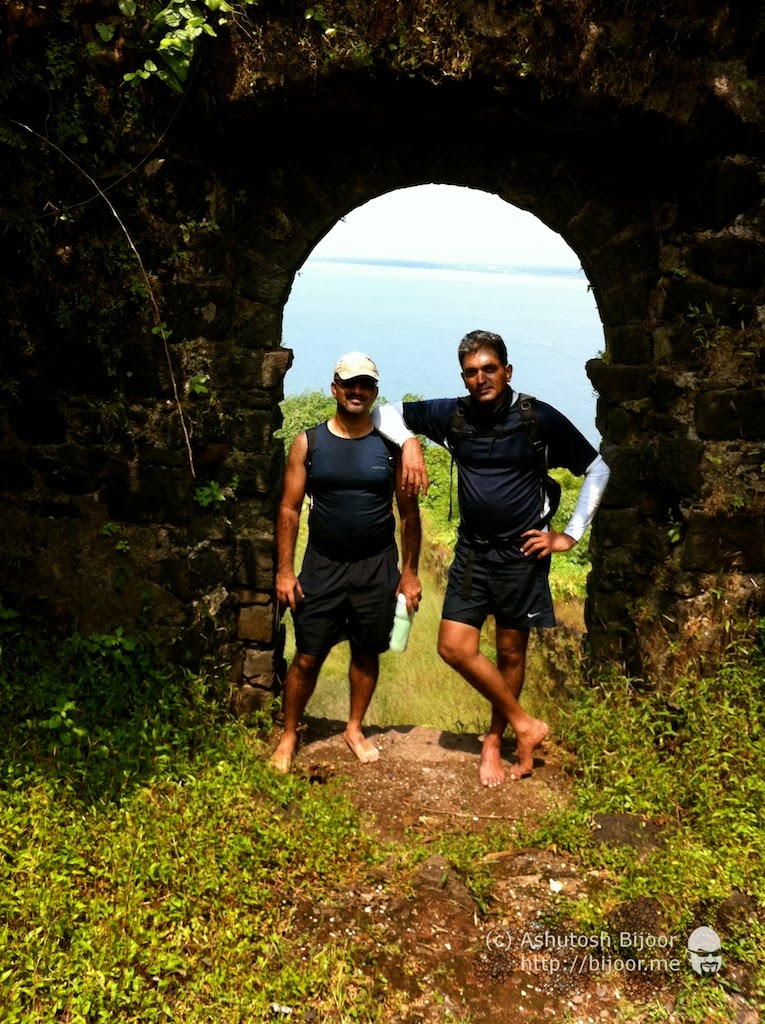 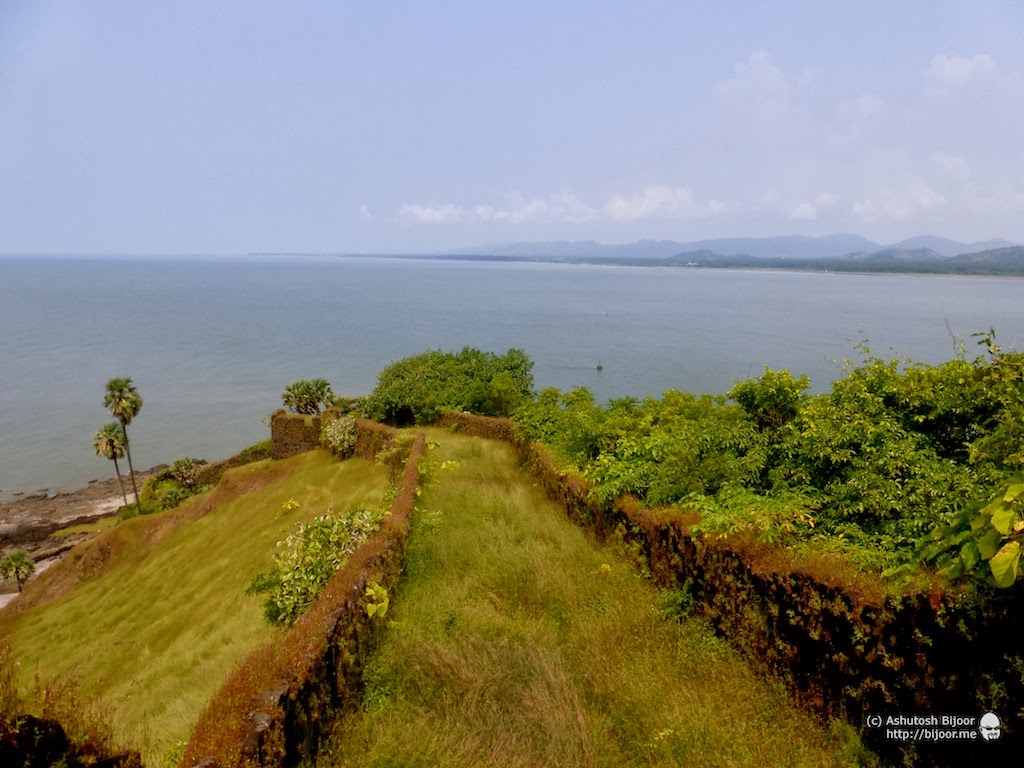 From the doorway of the bastion, you can see the northern tip of the fort snaking its way slightly downhill, with the wide Arabian sea spread out behind. Korlai fort was strategically important as it guarded the mouth of the bay, and protected the Portuguese stronghold in Chaul, which had a much bigger fort 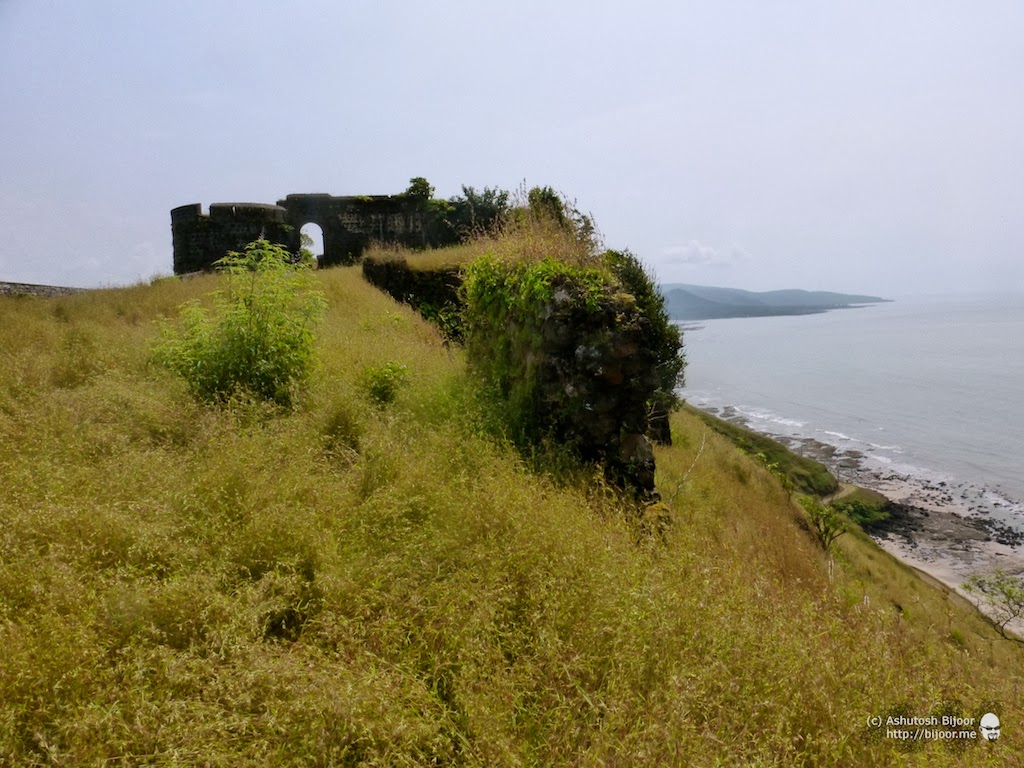 Next we walked southwards through the fort towards the central area protected by bastions at each corner and housing the chapel. As you can see, some of the ramparts are now disintegrated with a lot of vegetation growing in the cracks between the stones On top of the bastion we found one of the 70 cannons that once guarded the fort. These cannons must have been witness to many a war that was fought over this fort. Originally built in 1521 by the Portuguese with the permission of the Ahmednagar sultanate, in 1684, Chatrapati Sambhaji made an unsuccessful attempt to capture the fort from the Portuguese. But it was conquered by the Marathas in 1740 and later acquired by the British in 1818 following the final defeat of the Marathas 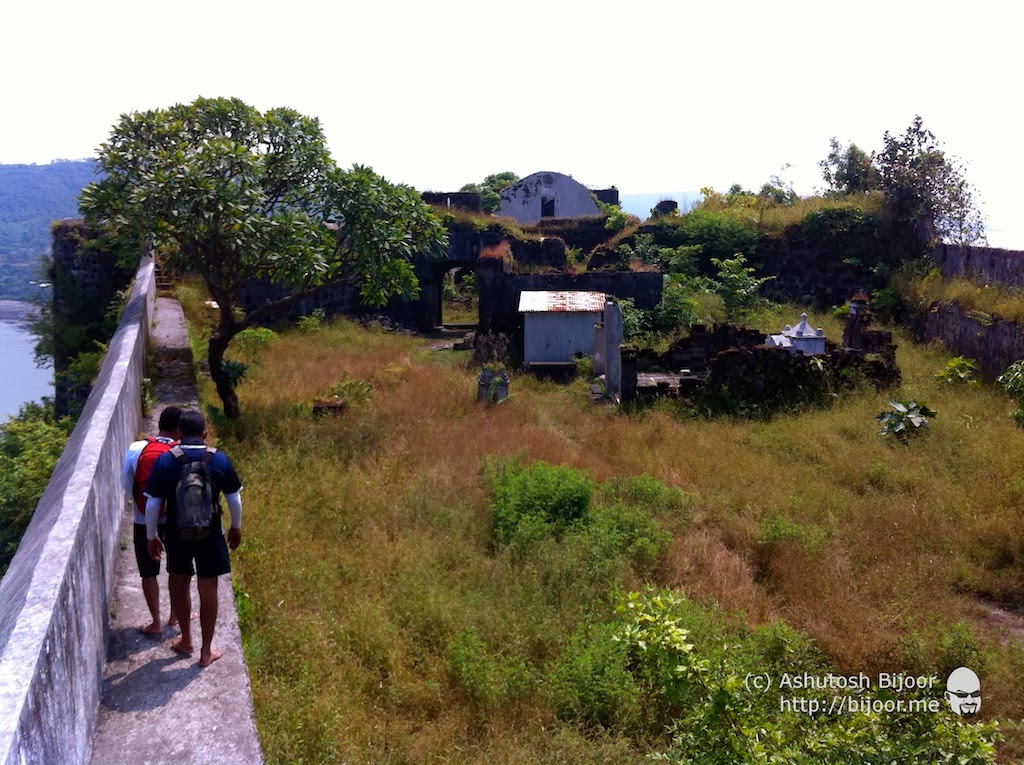 The main central section of the fort is well protected by high walls on both sides and fortified bastions at either end. Within it there is a Hindu temple that may have been built by the Marathas, and a chapel 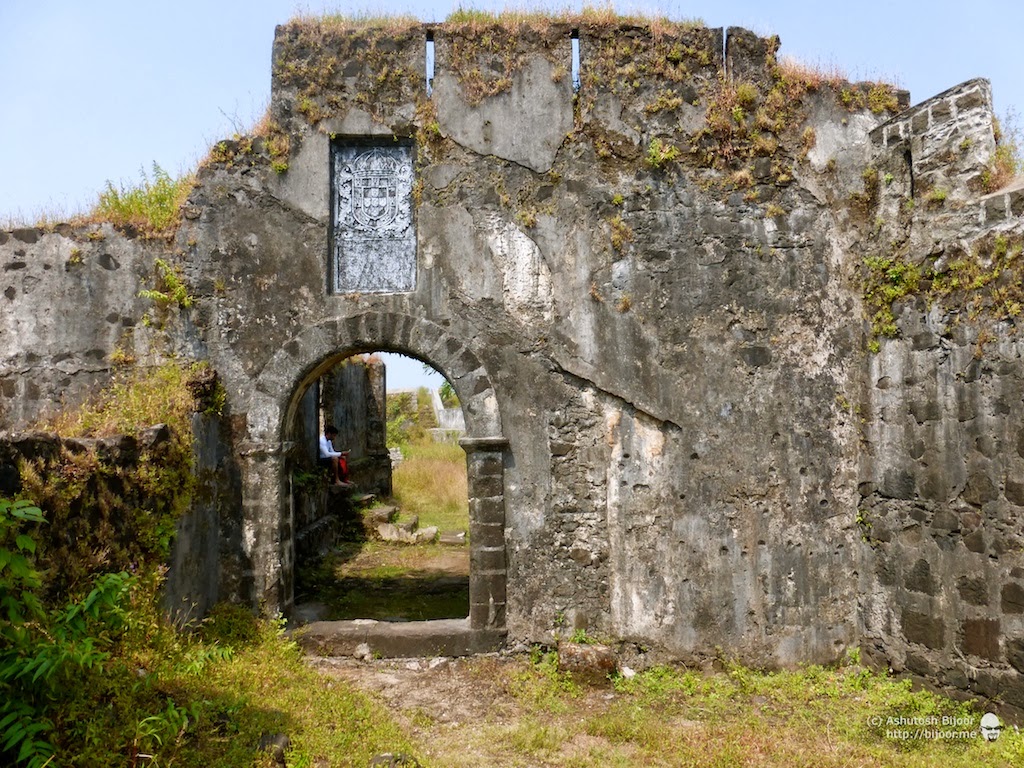 An arched gateway with an inscription above it leads to the chapel. The inscription states that “This castle was commanded to be built by the Viceroy of India Dom Filipe Mascarenhas in November of the year 1646 and Fernão Miranda Henriques being Captain of Chaul, and was finished in May 1680, Cristóvão de Abreu de Azevedo being Captain of this fort” 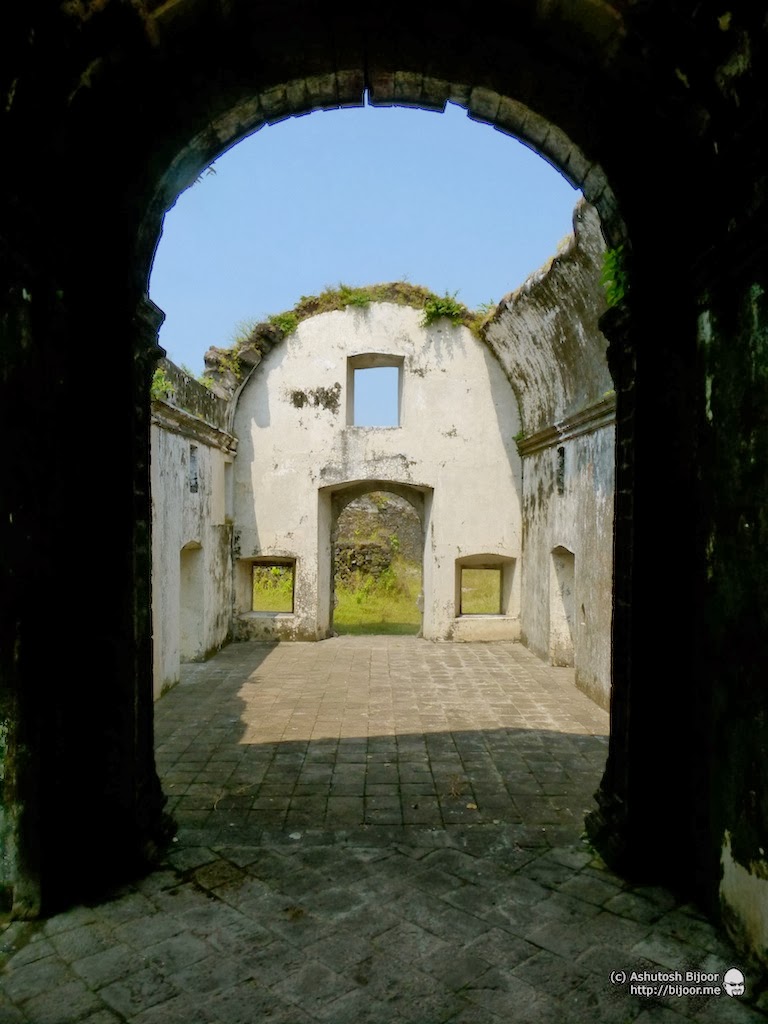 The Chapel of Our Lady of Good Voyage is located in the center. The construction is very similar to chapels in other Portuguese chapels found in Vasai fort as well as in Goa – called the Província do Norte churches. The entrance has a round arch topped by a rectangular window and also an oculus. There are decorative motifs at the base of the entrance columns. The roof is the typical barrel vaulted roof, which now only remains over the altar area and the rest of it is broken 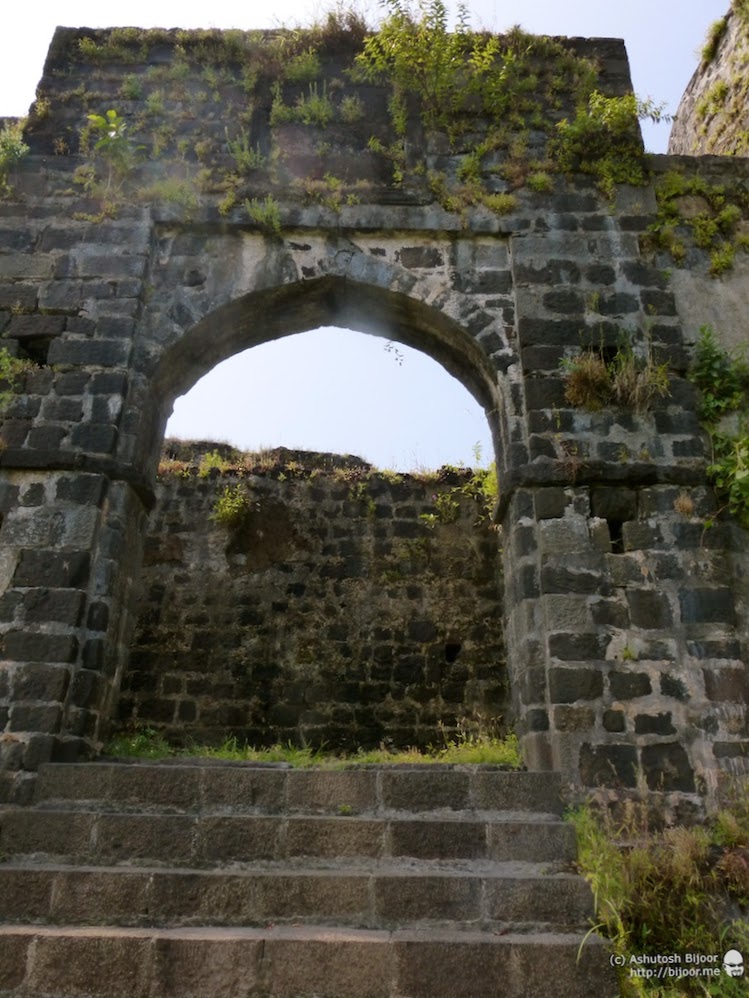 Outside the chapel’s apse are two buttresses. This sector of the castle also contains the captain’s house, munitions stores and a cross. To the east is another arched entrance in the wall on the east that leads to the path down to Korlai village at the foot of the hill. This arch appears to be shaped like the Mughal arches probably influenced by the Sultan of Ahmednagar The view to the east looks towards Revdanda and one can see the bridge over the Kundalika river. This view demonstrates why this fort was so strategic for protecting the bay 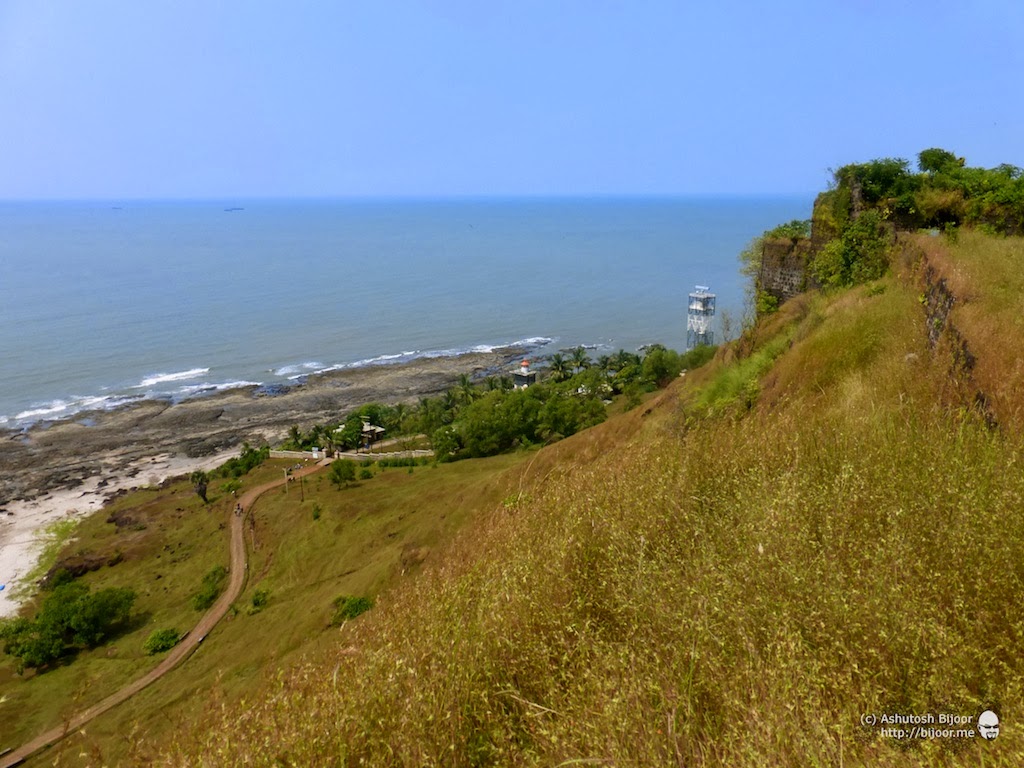 After spending over an hour and a half at the fort, we decided it was time to head back lest it get very hot and sunny. We could clearly see the lighthouse complex on the west, and headed back to the same entrance we had come in – so as to retrieve our shoes and cycles 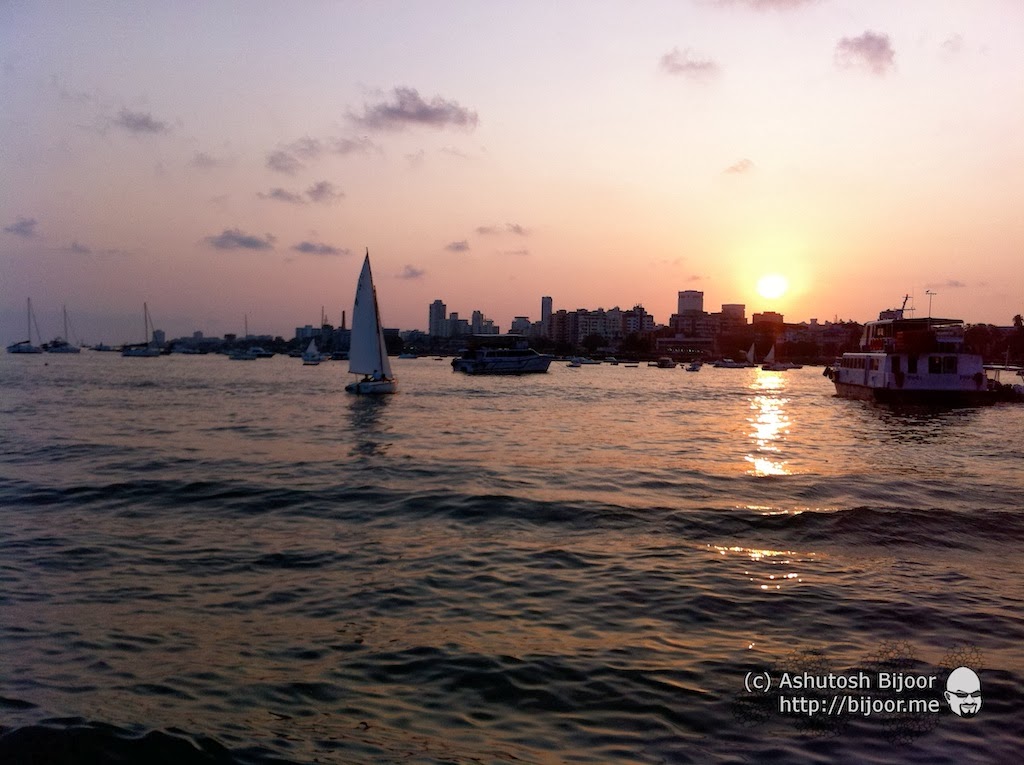 The ride back to Mandwa jetty was uneventful, but Ajit did not want to lose the opportunity to eat the local fish. So we stopped by at Chaundi Naka to satisfy his appetite and reached Mandwa to discover that the last launch that could take our cycles had just left. Luckily we managed to convince the bigger motorized launch with air conditioning to allow us to load our cycles in the back near the kitchen. And what a sweet feeling we got when we overtook the slower launch that we had missed! We reached Mumbai just as the sun was setting, exhausted but thrilled at having conquered another fort!