Jawhar is a relatively lesser known holiday destination that is not very far from Mumbai (166km) and Nashik (80 km). At an altitude of approximately 1500 feet above sea level, it is also cooler than the plains below and is also amidst thick forest cover on all sides, making it an excellent weekend getaway from Mumbai or Nashik. But for me the attraction of Jawhar was to explore the historical fort and palace there, which has been a destination on my map of historical sites in and around Mumbai. 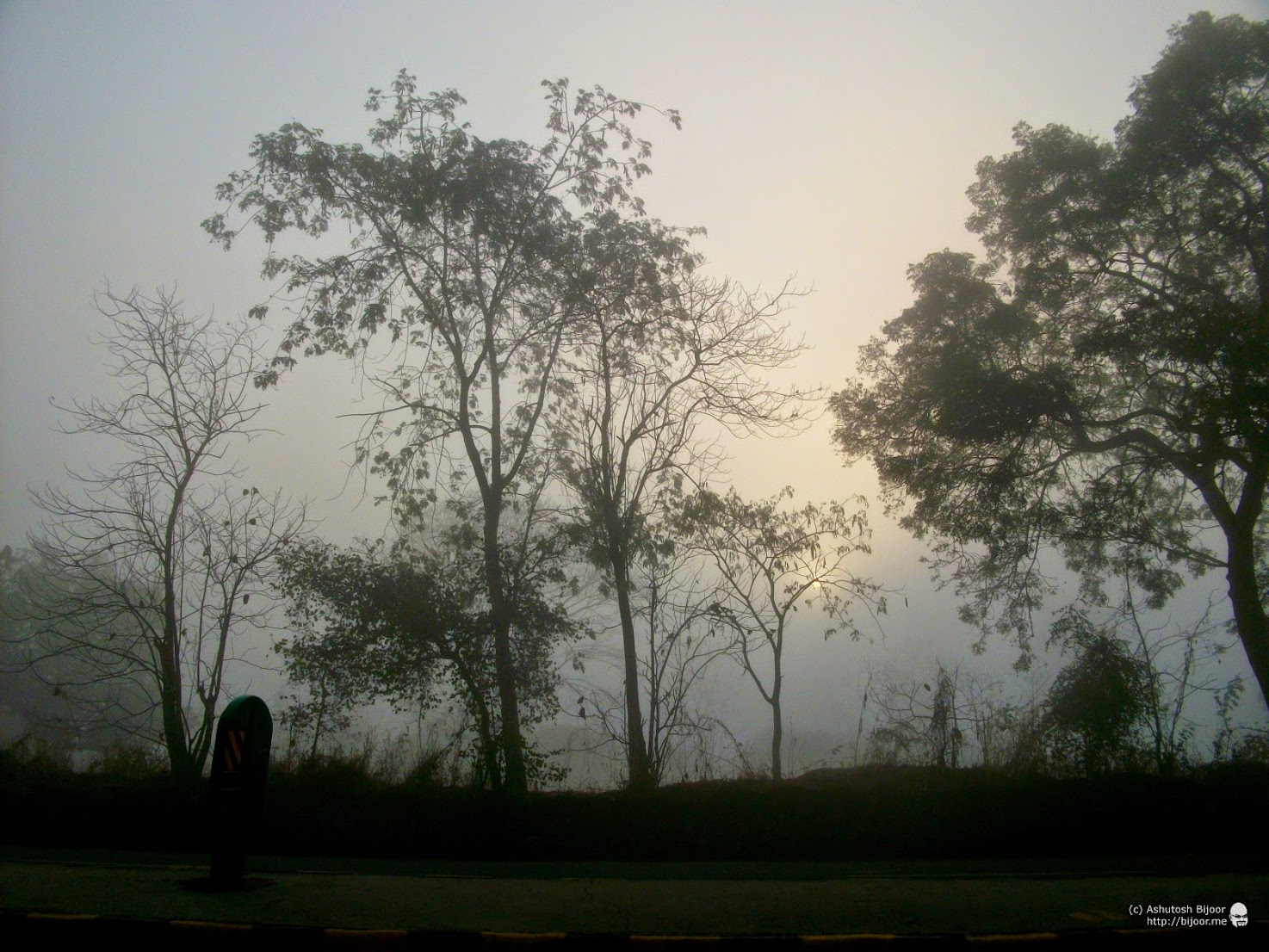 The distance to Jawhar from Thane is just about 95 km, and so I started cycling from Thane at 4 am and rode in the dark along SH 35 towards Bhiwandi and then further to Wada. There was a thick fog and very low visibility, and though I had bright lights on my cycle, I rode carefully lest any vehicle on the highway did not notice me. I was glad to see the sun making a desperate attempt to shine through the fog 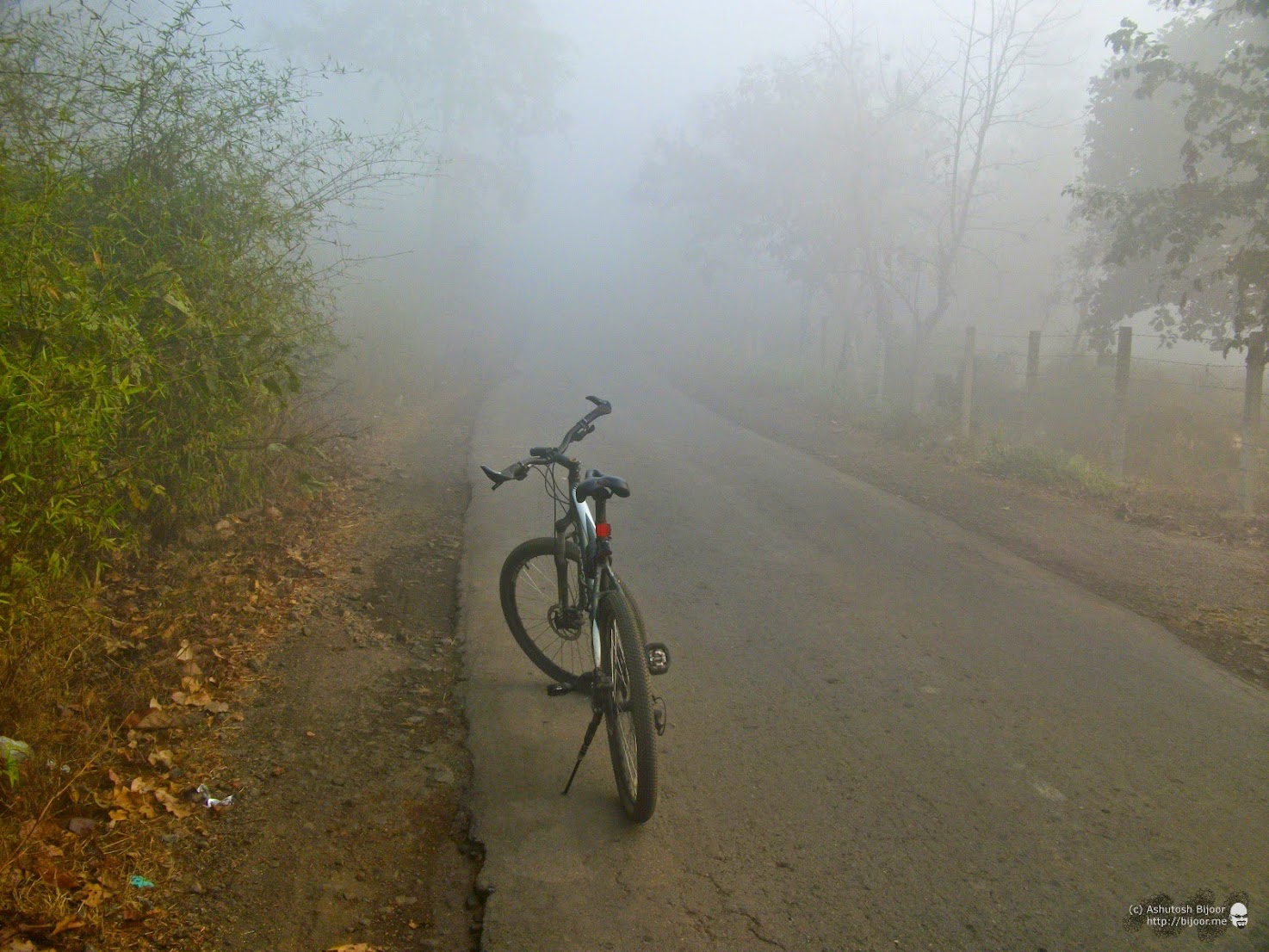 After Wada, the road (SH 76) is quite narrow, and though there was sufficient light, the fog was still quite thick. But luckily there was very little traffic, and I began enjoying the quiet ride 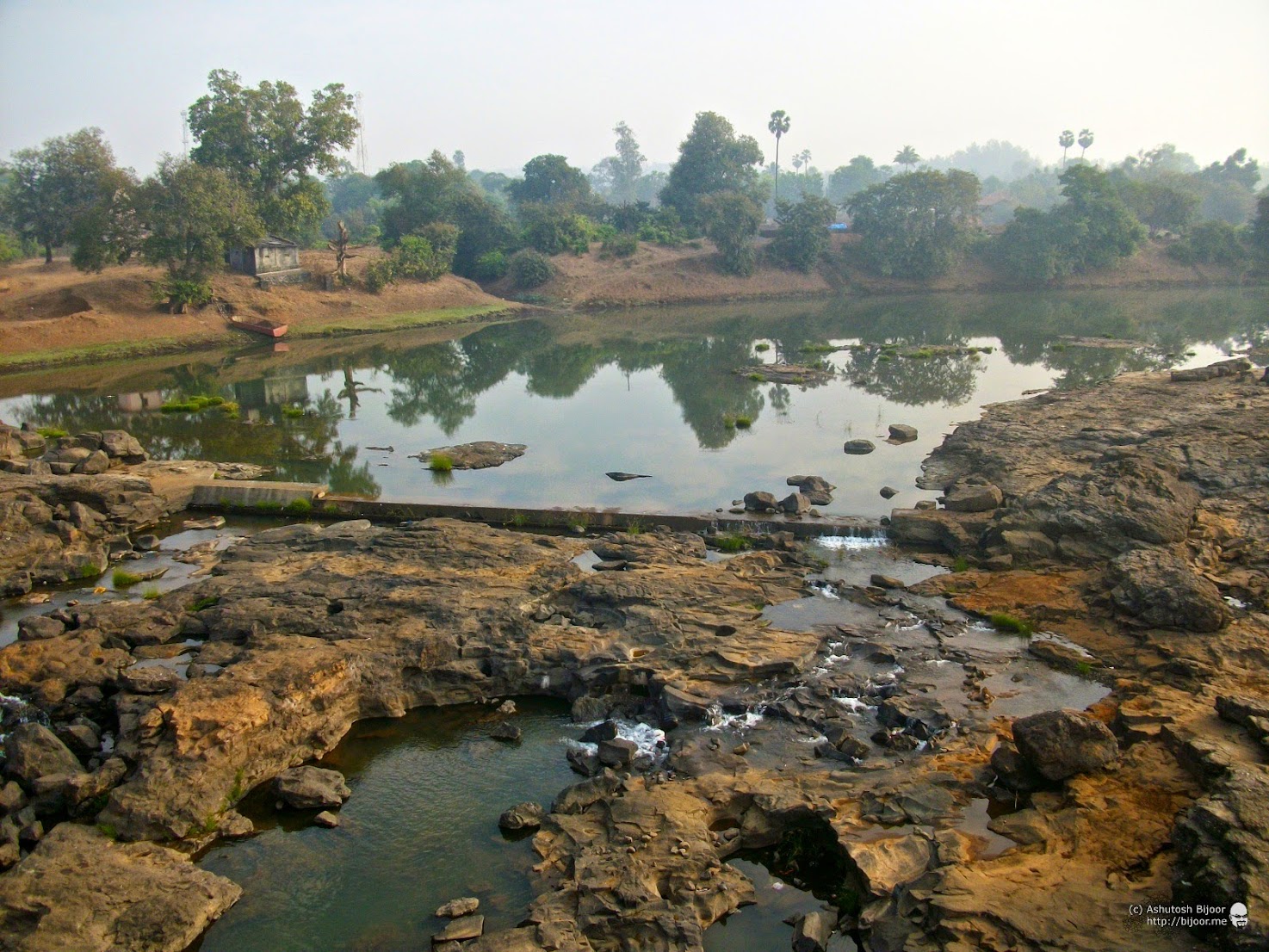 Between Pasta and Malawada, I crossed the Pinjaal river over a rickety bridge, after which the road climbed uphill all the way to Jawhar 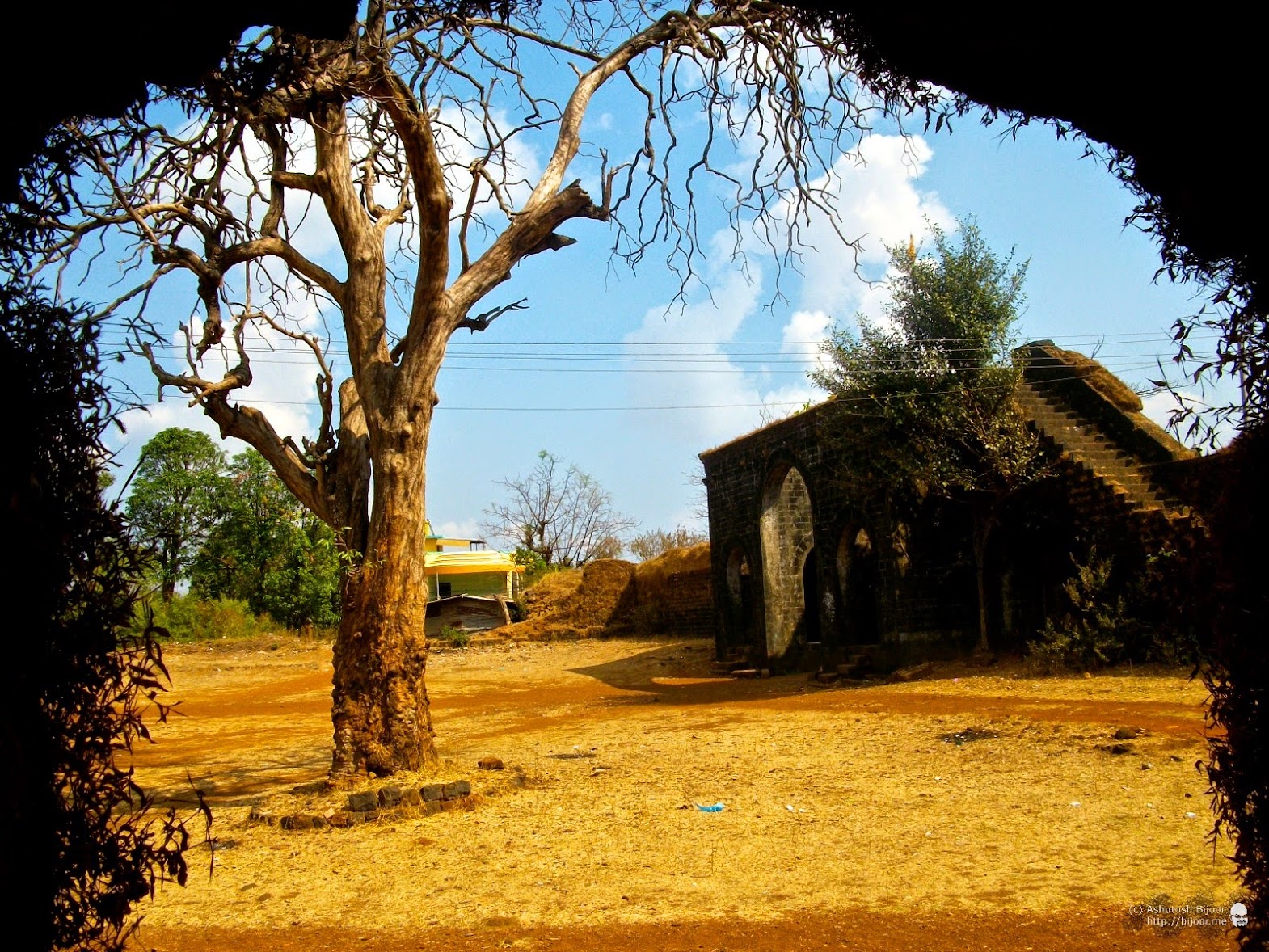 Once I reached Jawhar, I asked around for the “purana killa” or old fort, and found the ruins of the old fort and palace in an open ground near the sunset point. There are very few of the original fortifications remaining, and I climbed up the rampart to survey the area 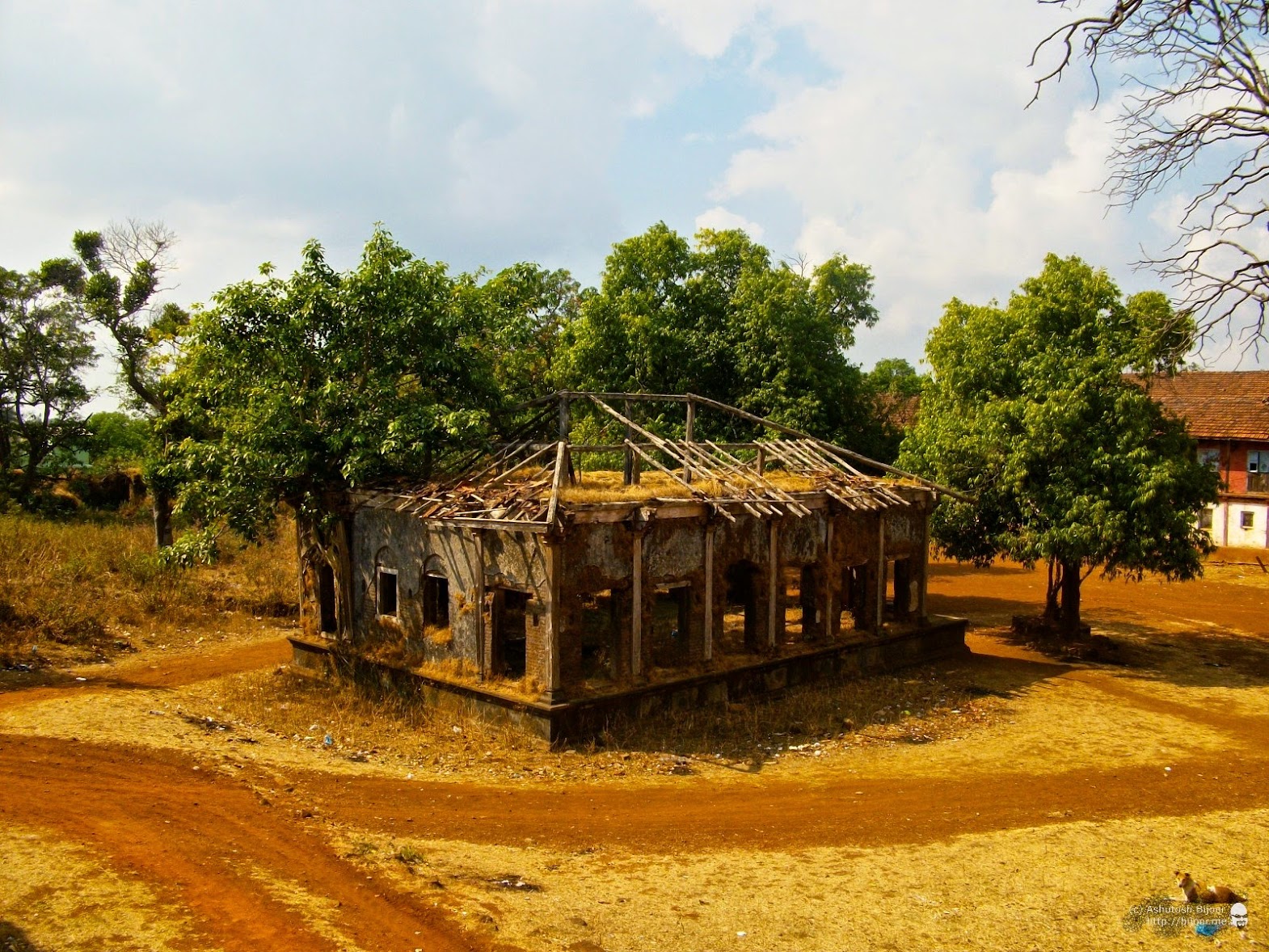 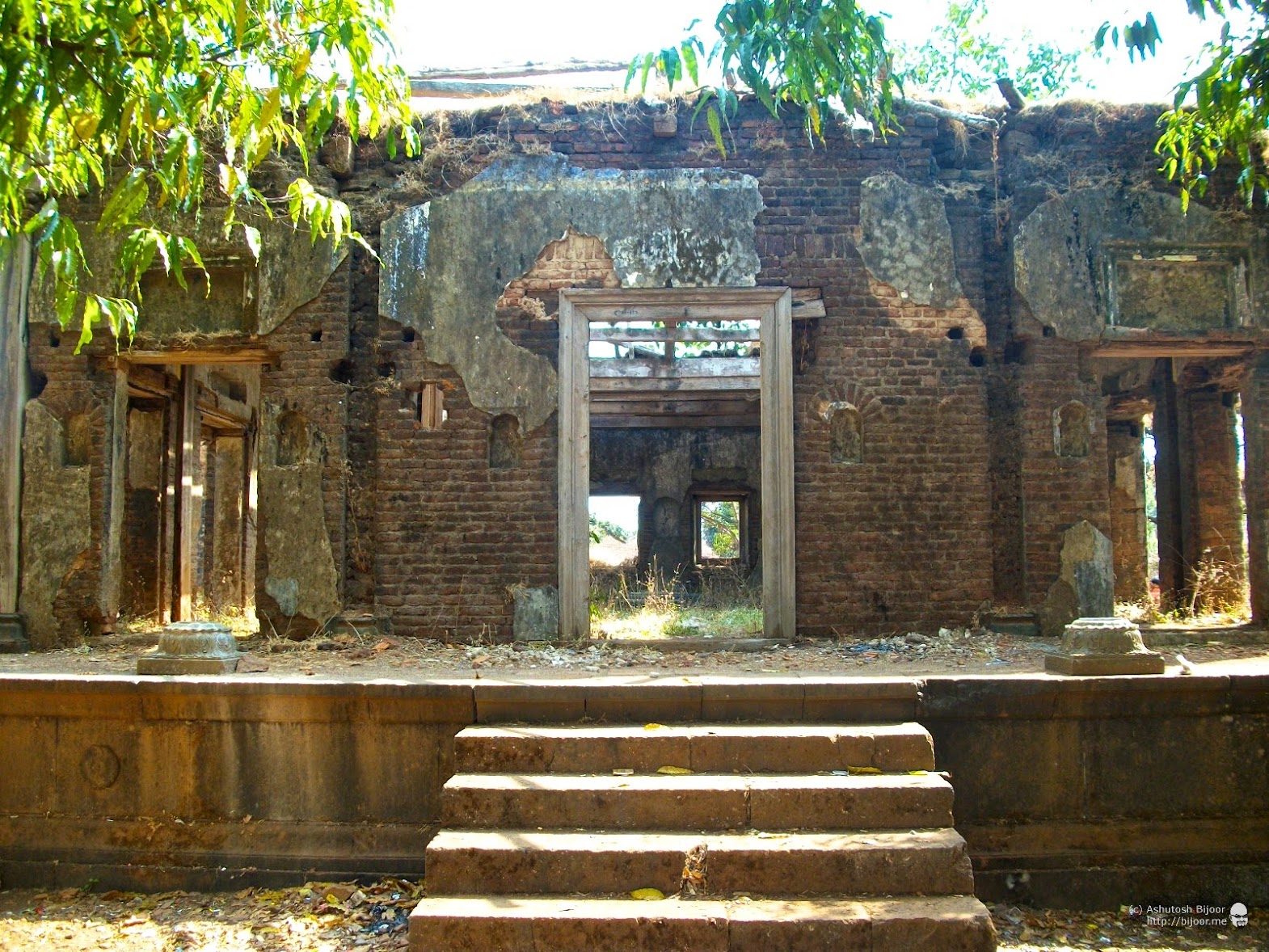 The old palace is more like a courthouse while the actual residence is a structure behind that is being used now as a municipal office. The courthouse is built on a platform, with external walls made of brick and most of the interiors made of carved wooden beams and pillars. The roof may have been the traditional tiled roof that is now completely disintegrated 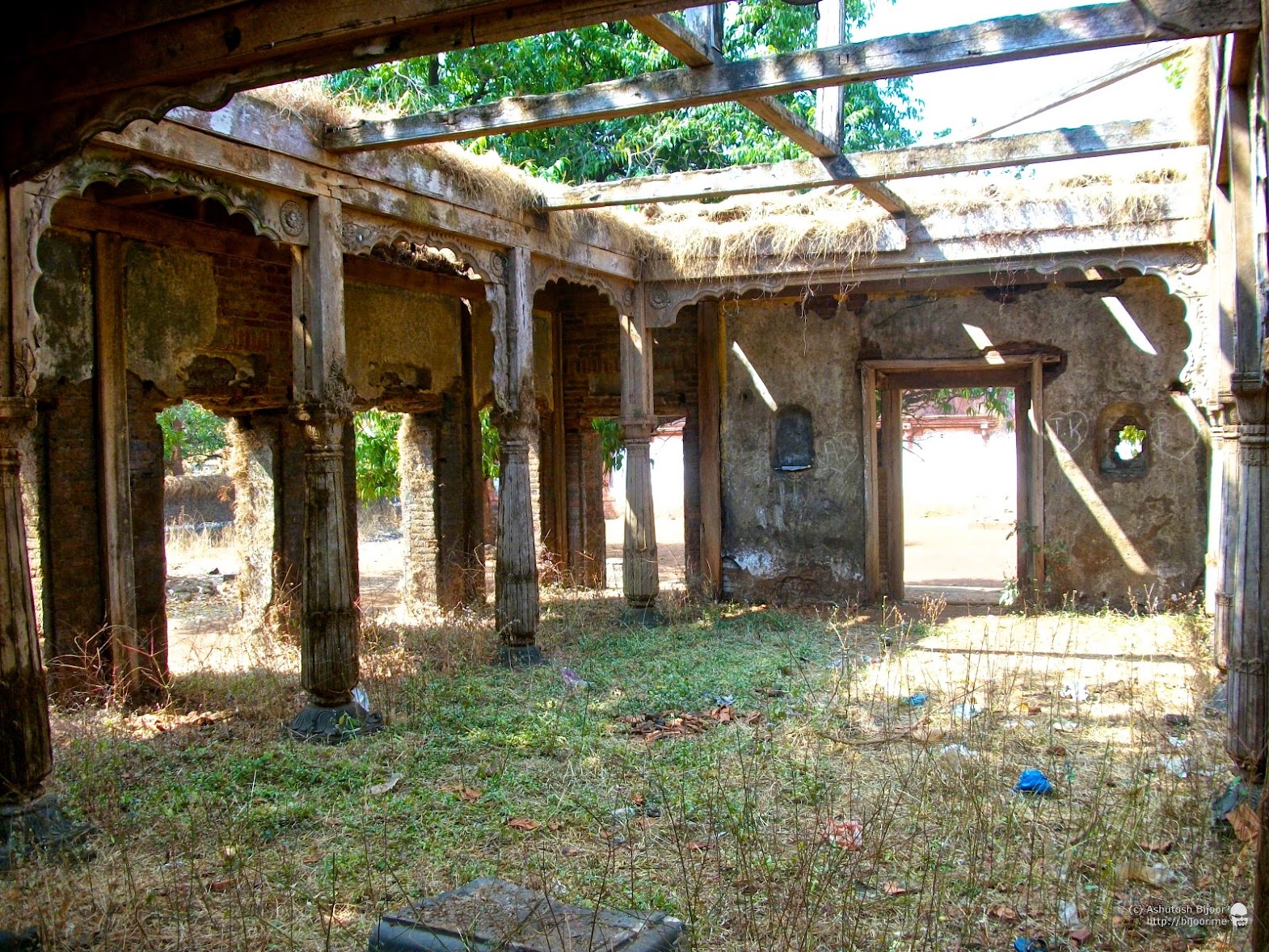 This view of the inside of the courthouse indicates that there was a central area surrounded by a corridor separated by wooden pillars. I could imagine the king seated on a grand throne at one end, entertaining his subjects and having strategic discussions with his advisors 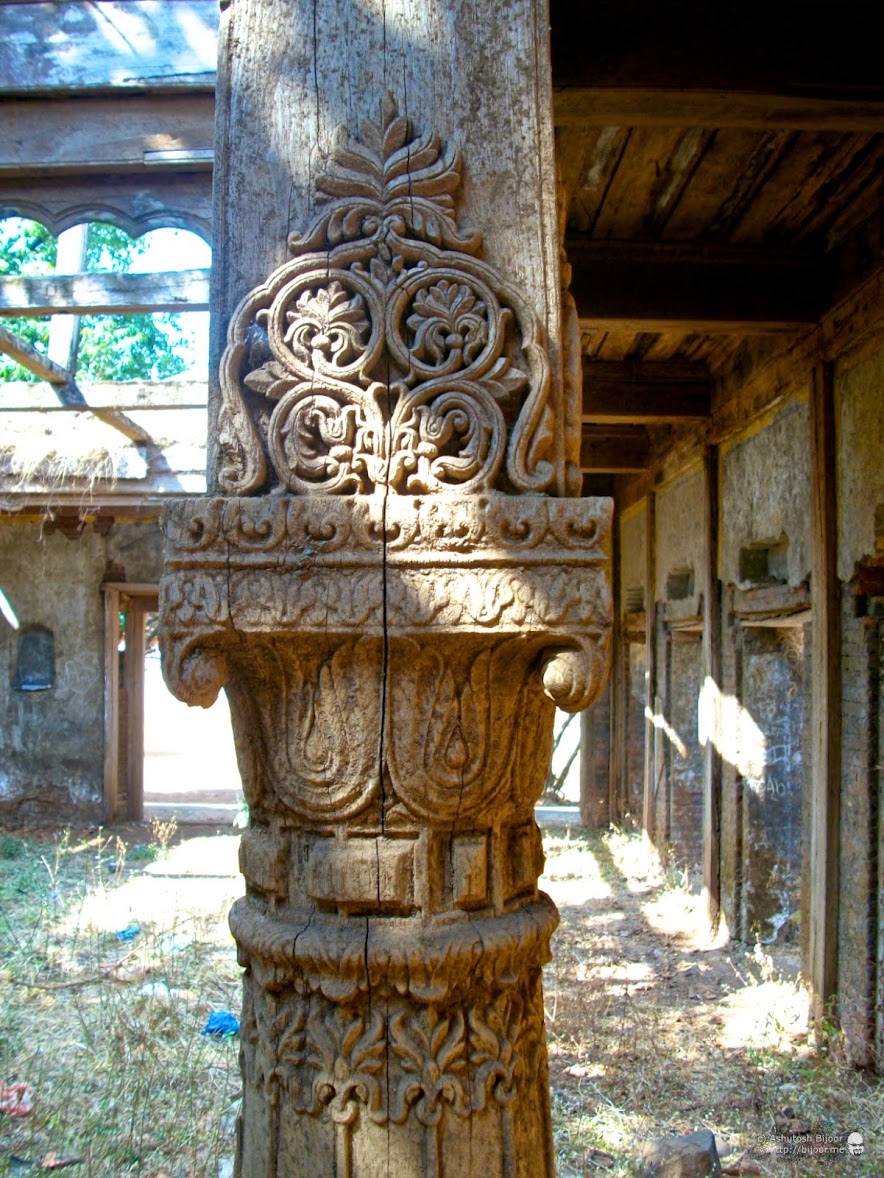 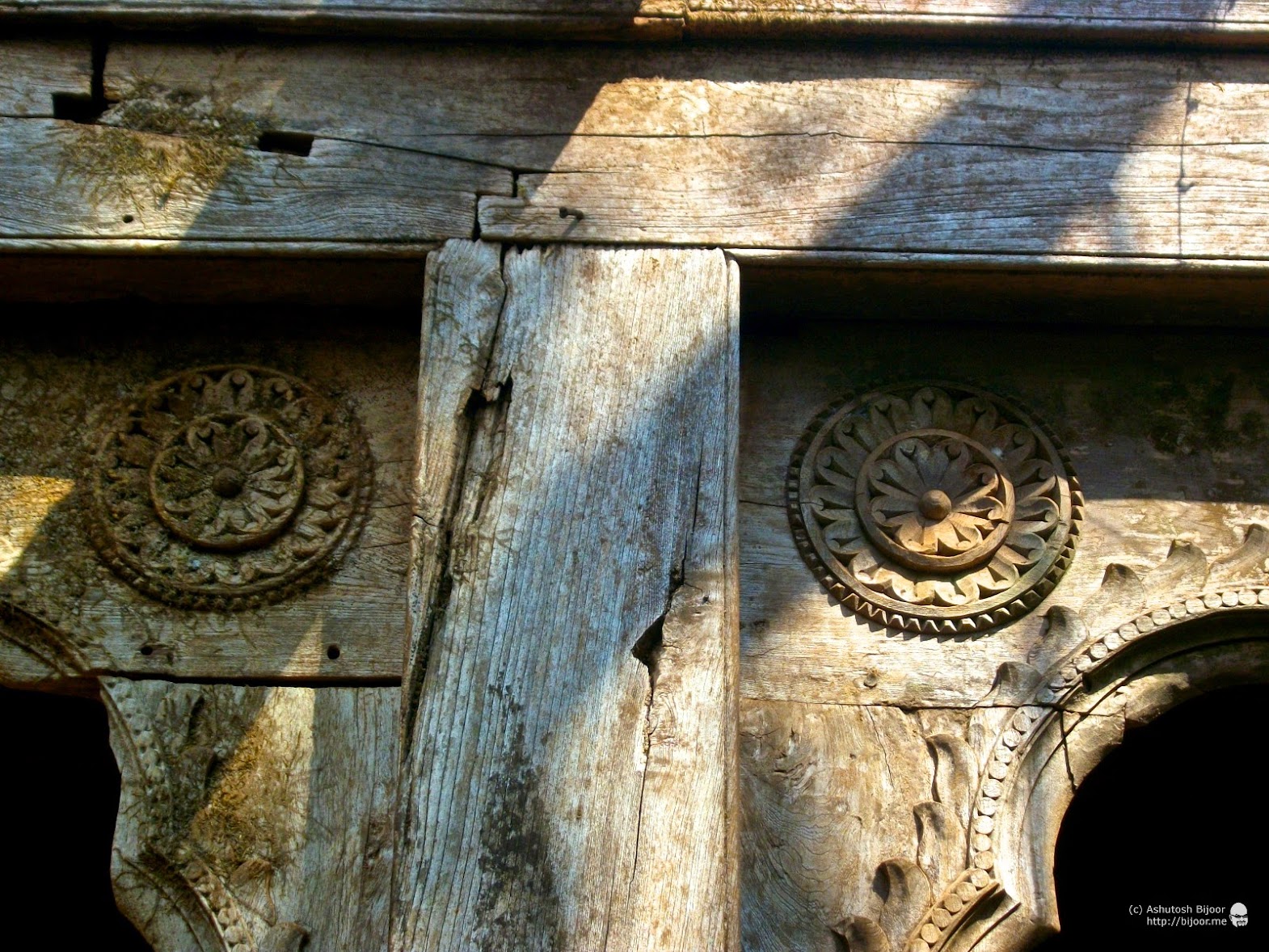 Jawhar was a princely state that was founded by Jaideorao Maharaj Mukne (also called as Jayaba Mukne) on the 5th June 1343 when he was granted the title of Raja Shrimant and Shah by the Emperor of Delhi. The Raja maintained a military force of 8 cavalry and 25 infantry in 1893 (ref). His elder son, Dulbarrao, expanded his patrimony and conquered a large territory, controlling 22 forts, comprising most of the Nasik and Thana districts, and yielding annual revenues valued at £90,000. He received recognition as ruler by Sultan Muhammad bin Tughlaq, receiving the new name of Nimshah and the hereditary title of Raja on 5 June 1343. This event was marked by the creation of a new calendar era used within the state for over six hundred years (ref) 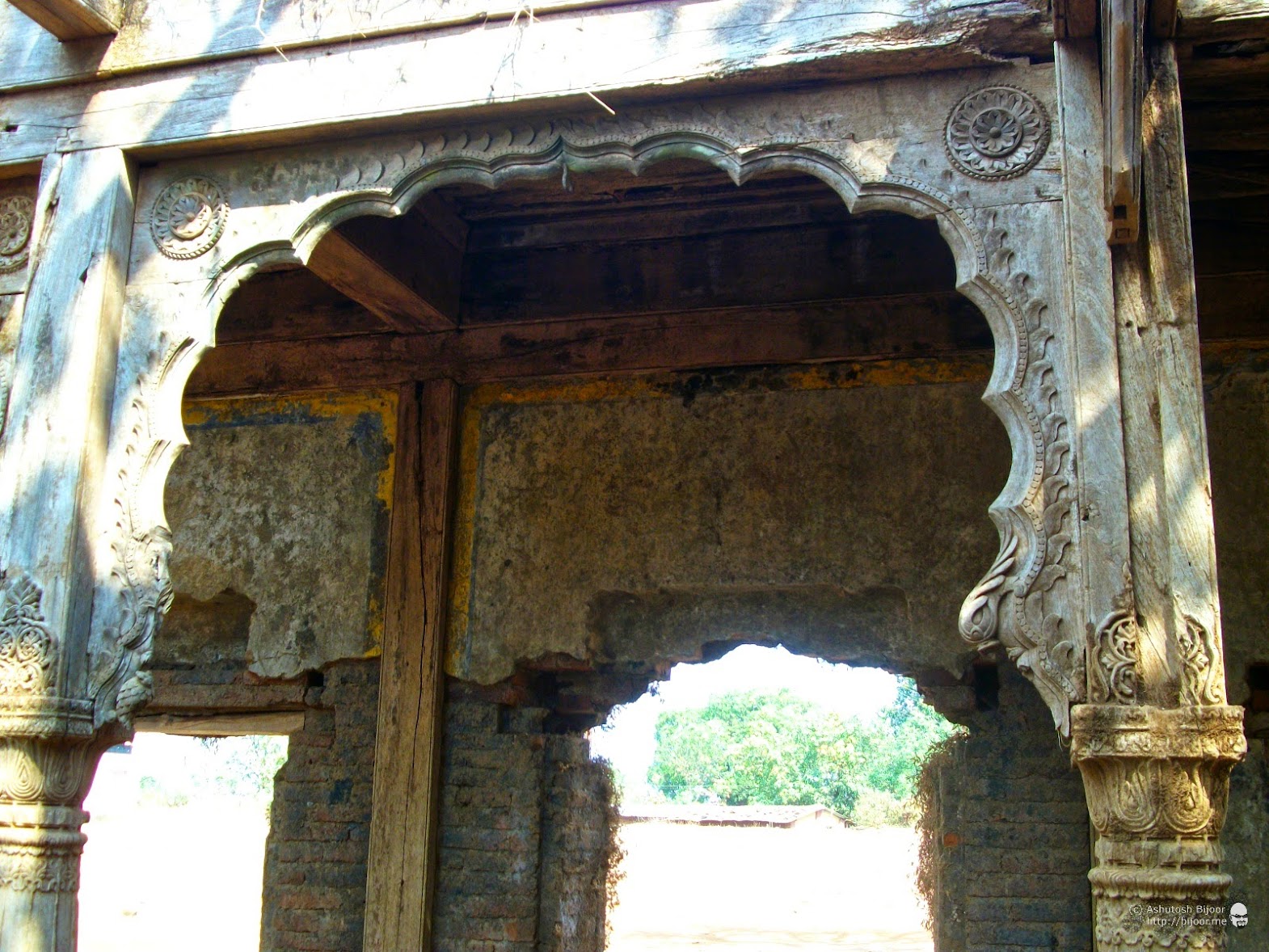 The grandson of Nimshah, Deobarrao, fought a battle with the Bahmani Sultan Ahmad Shah I Wali. During his capture at Bidar, he fell in love with the Sultan’s daughter. The marriage was solemnised after he converted to Islam and took the name Muhammad Shah. He returned to Jawhar and continued to rule his state unmolested, for the rest of his life. At his death, the powerful Hindu sardars and nobles refused to recognize his son as his successor, on account of his Muslim faith. In his stead, they chose the Hindu grandson of Holkarrao, the younger brother of Nimshah. Thereafter, his Hindu descendants ruled the little state in relative peace until the advent of the Maratha power (ref) 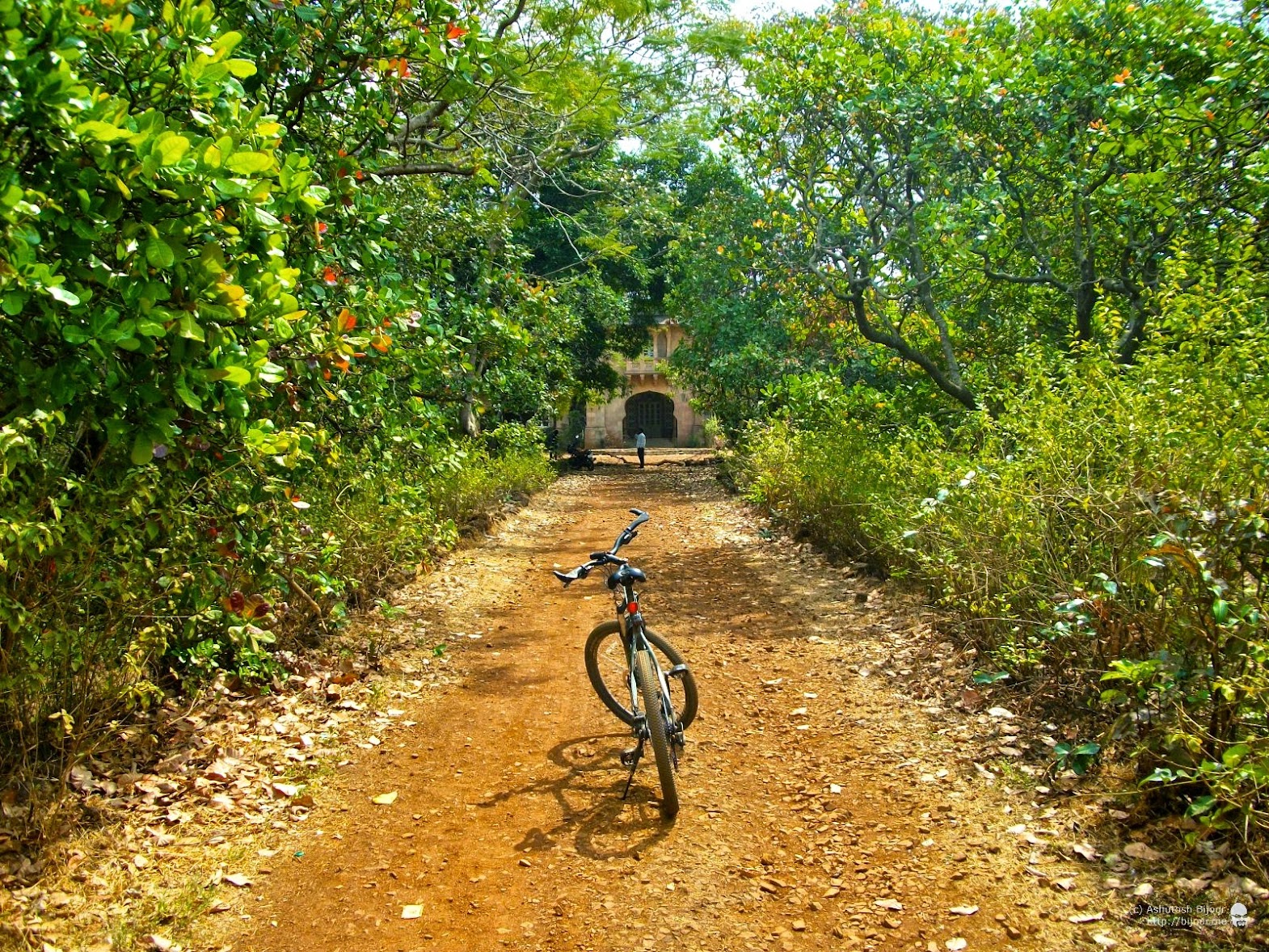 Next I made way to the new palace – the Jai Vilas Palace located off the highway and amidst a green cashew-nut plantation. This palace was built by Raje Yashwant Rao Maukane. The stone used for this is syinite which was brought from Kalidhond which is 5 kilometres (3.1 mi) away from its location. It is said that when the work of palace was completed, the quarry from which the stone was extracted was destroyed. The Geological Department of the Government of India has undertaken a survey to discover its location (ref) 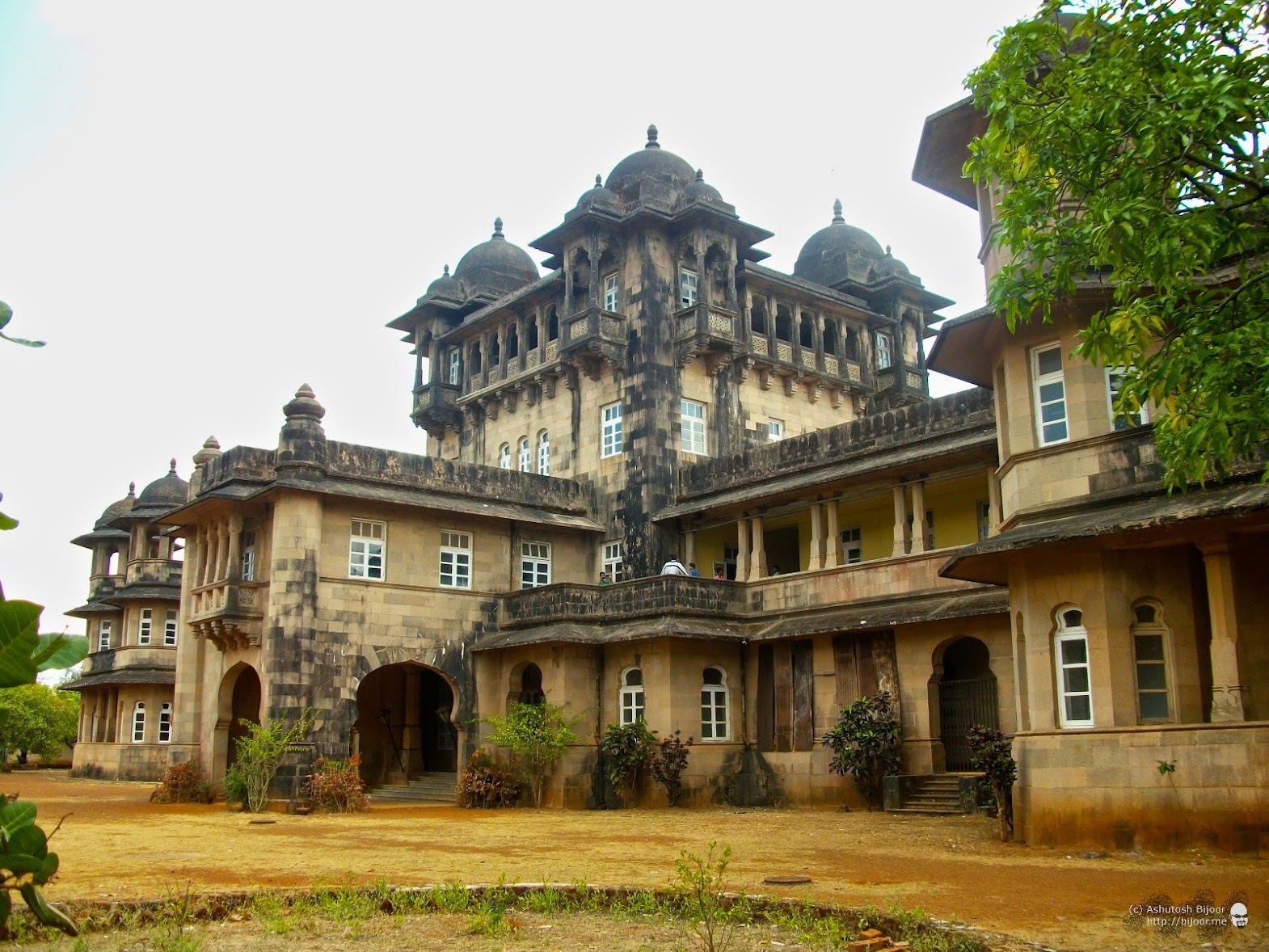 The palace is in good shape and one wing is still used by the descendants of the king even today as a holiday getaway. Of the total of about 30 large rooms, most of the rooms are now accessible to visitors by paying a small fee to the caretakers who will give a whirlwind tour of the interior

Photography is not permitted in the interiors that have some interesting antique furniture. But I could not resist taking a photo of this wooden window that looks out into the forest with a view of the valley below 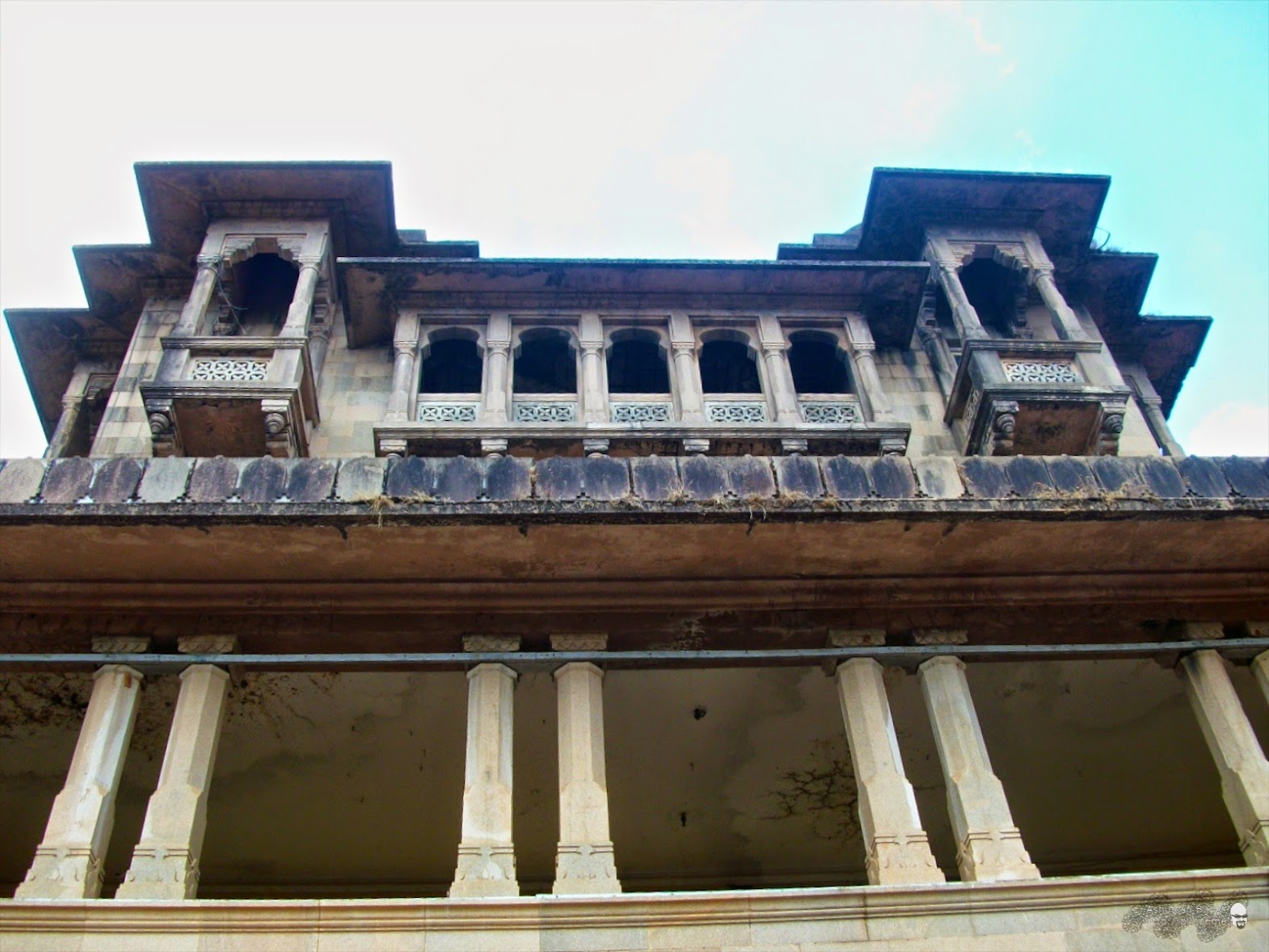 The corridors of the palace are lined with oil paintings of the royal family and some stuffed animals are preserved in one room, including a stuffed tiger – probably the result of the ill-advised hobbies of the erstwhile royals 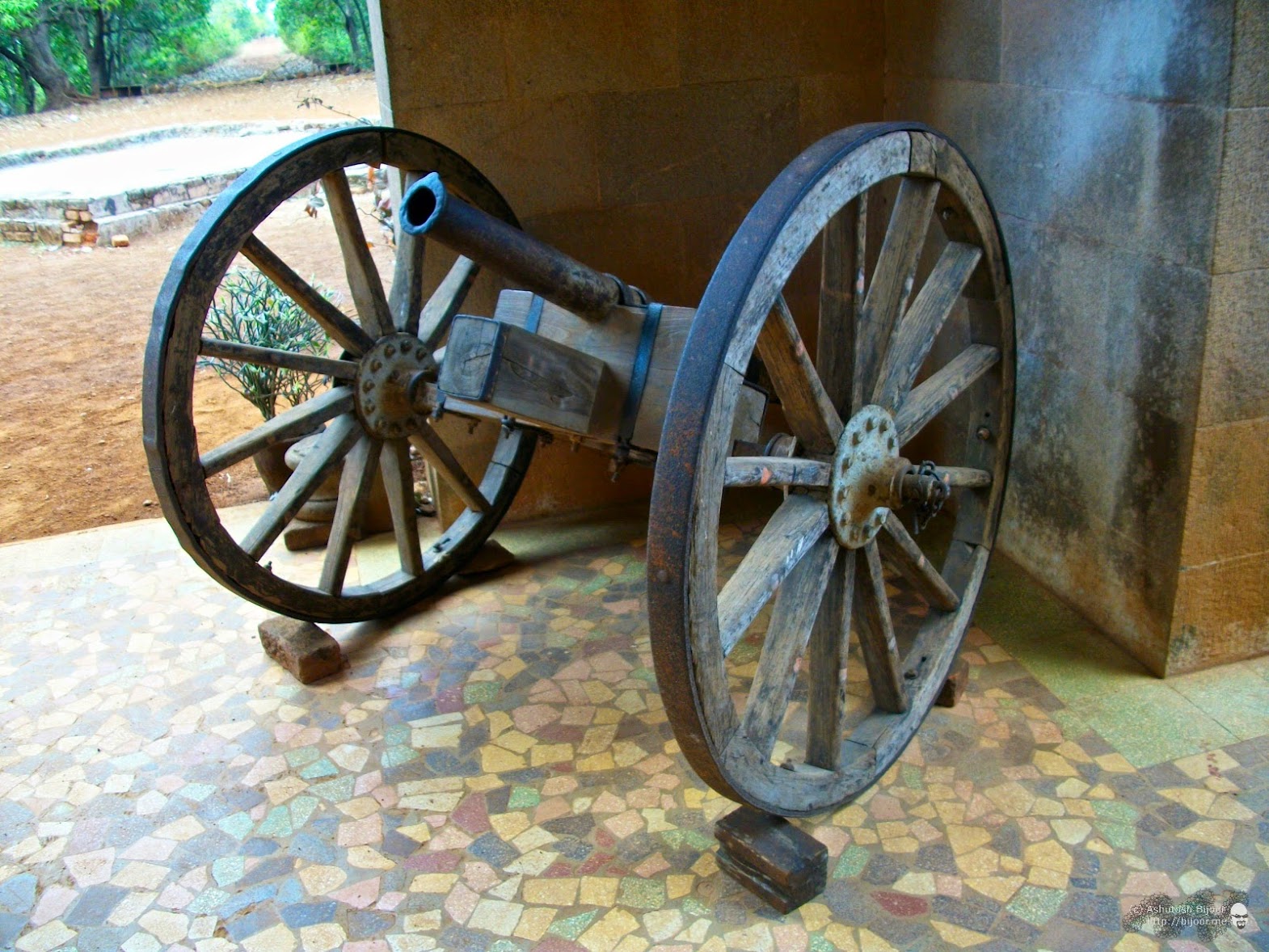 Outside the palace in one of the arched gateways, lies an old cannon that is now just a decorative piece. It was already almost noon, and I was famished. So I bid farewell to the palace and headed out on the highway 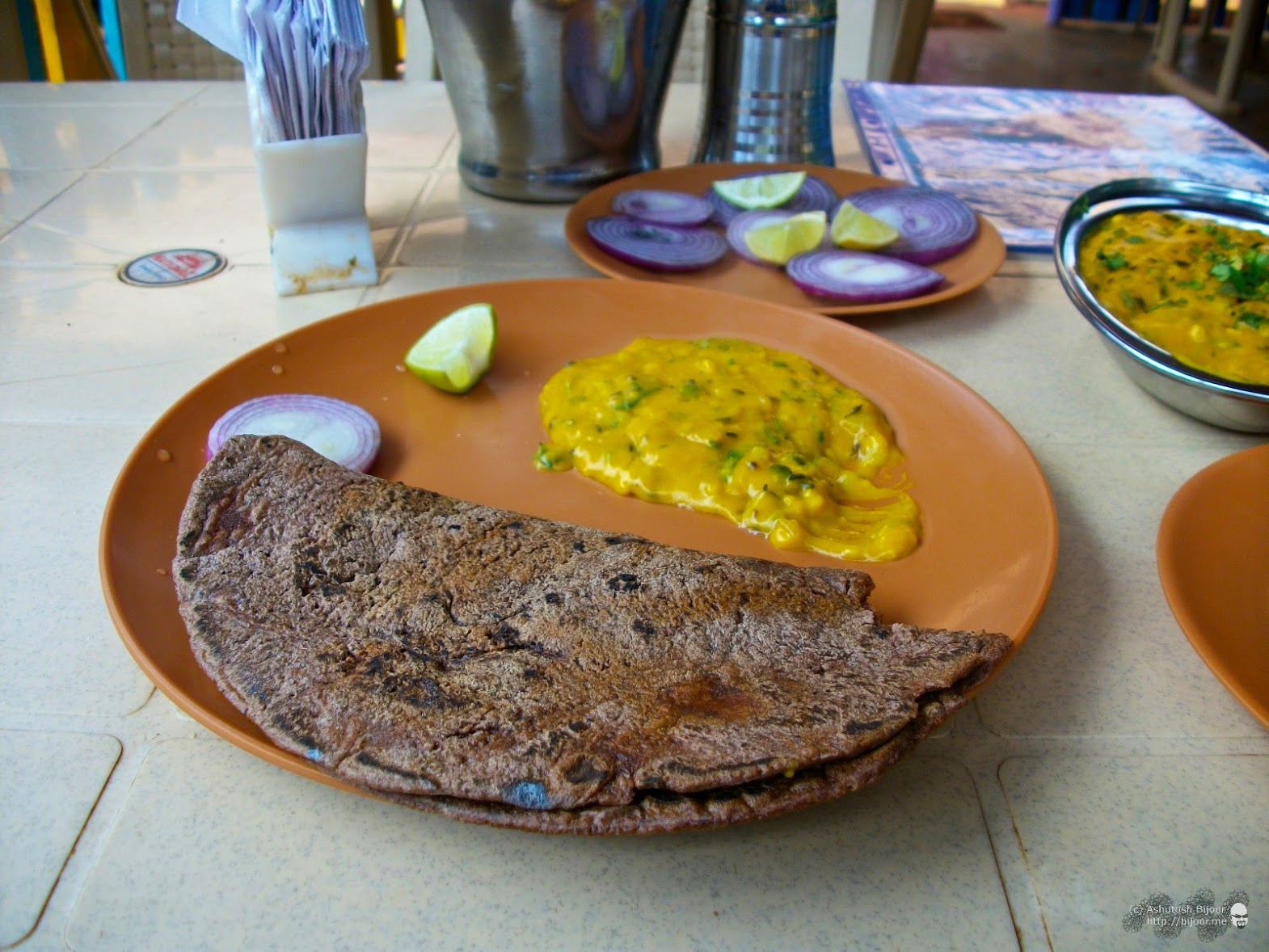 I stopped by at a local restaurant to have a tasty meal of Pithla Bhakri – a traditional Maharashtrian dish. The pithla has a semi-solid consistency and is made from chick pea flour while the bhakri is a round flat unleavened bread usually from wheat flour, jowar flour, bajra flour or nachni (finger millet) flour. I walloped the entire dish – then satiated, slowly rode back in the hot sun back towards Thane 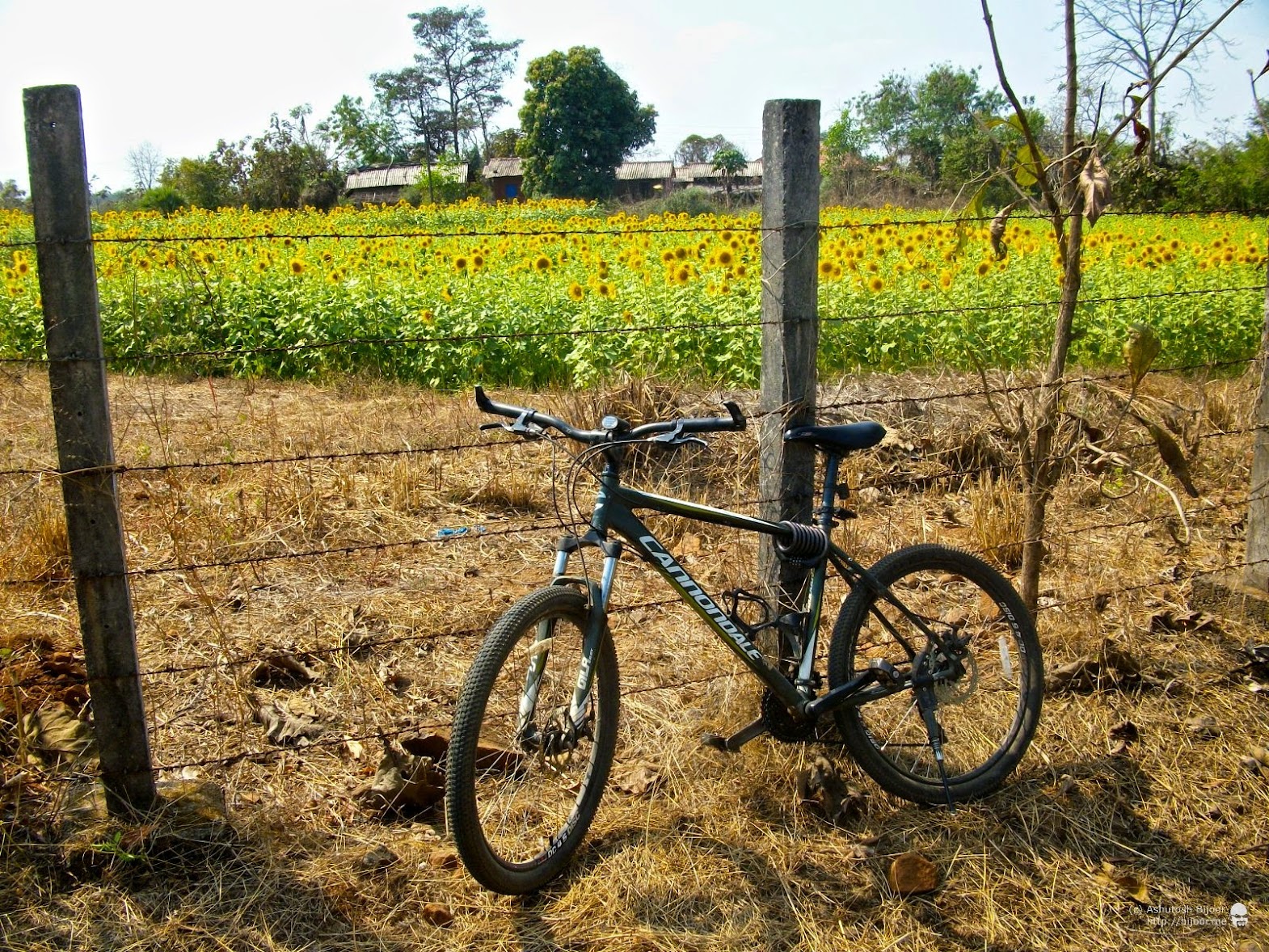 I made quick progress as the entire ride was primarily downhill. Just took small breaks to admire the sunflower fields that were hidden in the fog on the way up

This is the route I took – from Thane via Bhiwandi and Wada. The other route via NH8 and turning right towards Wada instead of left towards Dahanu – is slightly longer, but is with better road surface than this route, and is used more often