Dharavi is well known as one of the largest slums in the world. The slum was founded in 1880s in part because of the expulsion of factories and residents from the peninsular city center by the colonial government, and from the rural poor migrating into urban Mumbai (then called Bombay).

But till then, Dharavi was just a marshy land at the coast of Mithi river (Mahim creek) that separated the British controlled Bombay island from Salsette island controlled by the Portuguese. In 1737, Salsette was captured by the Maratha Empire and most of the Portuguese provinces in Bombay were ceded to the Marathas (ref). Perhaps in response to that, John Horne, the governor of Bombay commissioned to build a fort at Dharavi to protect the border of Bombay from the mighty sea-faring leader of the Marathas – Kanhoji Angre. The fort is variously called as Riwa Fort, Rewah Fort or simply Kala Killa.

The fort lies hidden in the slums opposite Mahim Nature Park and behind Dharavi Bus Depot, and is accessible from a lane next to the depot and into a small lane beside the main gate of Dattaguru Housing Soceity that leads into the slums

The coast of Mithi river used to extend eastward from Rewa fort to Sion fort, and between these two forts they guarded the only entry point to Bombay island – the Sion Causeway (read more about Sion Fort). To the west was Mahim Fort on Bombay island and the Portuguese-built Bandra Fort on Salsette (read more) 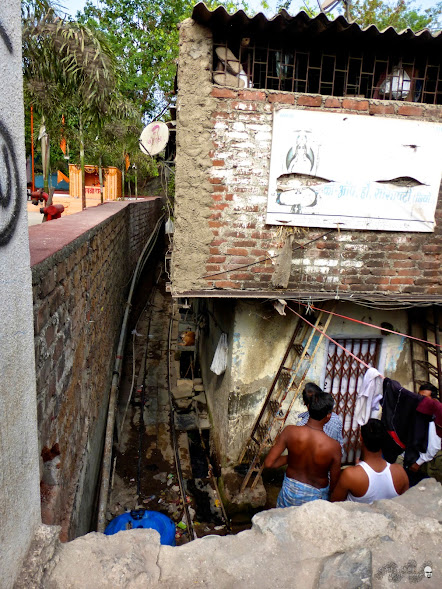 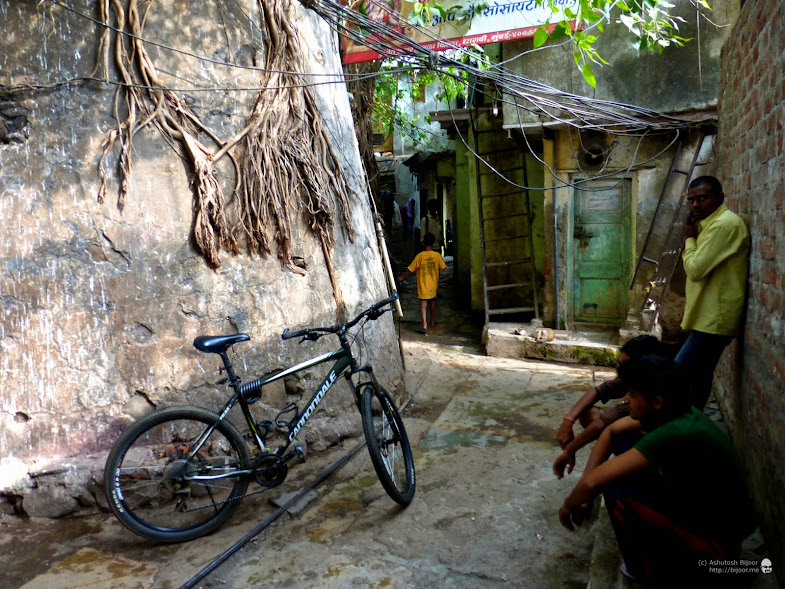 The access road to the fort is an almost invisible small gap between the boundary wall of Dattaguru Soceity and the slums. No other way to get there but by foot – and I had to carry my cycle down and make my way through it till I emerged out into a small clearing to see the wall of one of the fort’s bastions, and some of the residents lounging around enjoying their Sunday morning 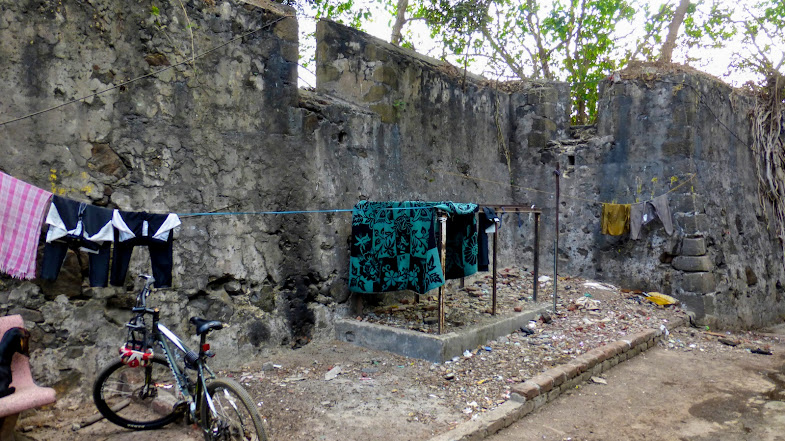 Luckily the fort ramparts are by and large in tact, and though the slum has eaten up all the open space around it, the fort itself is still free from encroachment – unlike Mahim fort that is completely overridden by the slums 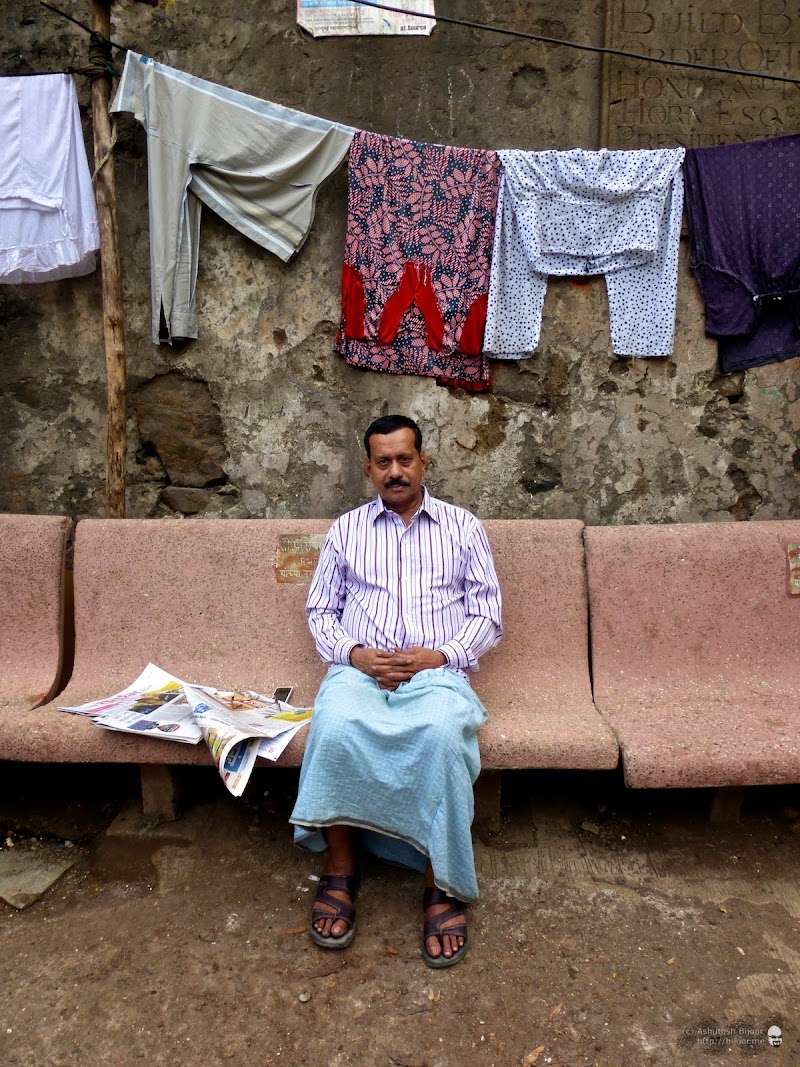 I met with Lakshman Zanke, who has been living here for over 50 years and has seen the fort when the river still flowed next to it, and he remembers jumping into the water from the walls of the fort. He claims that his family has been protecting the fort from encroachment and he has applied for funds for renovation and protection of the fort… commendable! 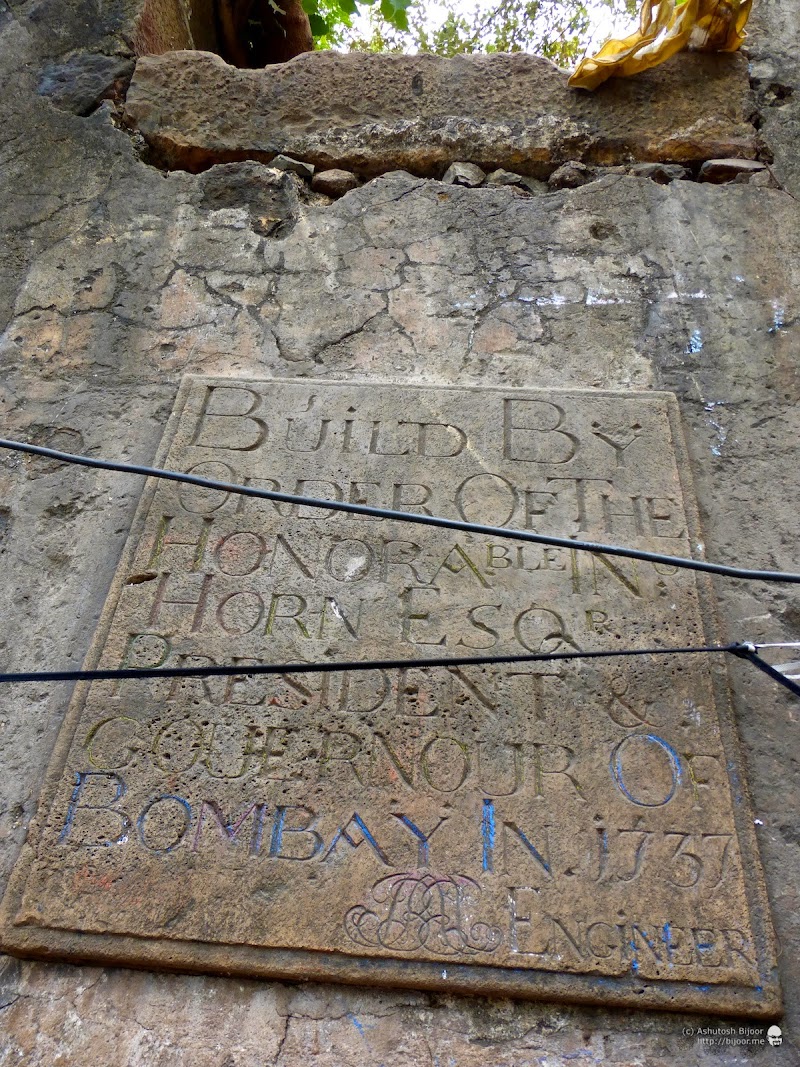 Just above the bench where Lakshman Zanke was sitting, a plaque on the fort wall proclaims its origin – “Built by Order of the Honorable Horn Esq. President and Governor of Bombay in 1737” it says, and signed by some Engineer. John Horne served as the 19th governor of Bombay from 22 September 1734 to 7 April 1739 (ref) 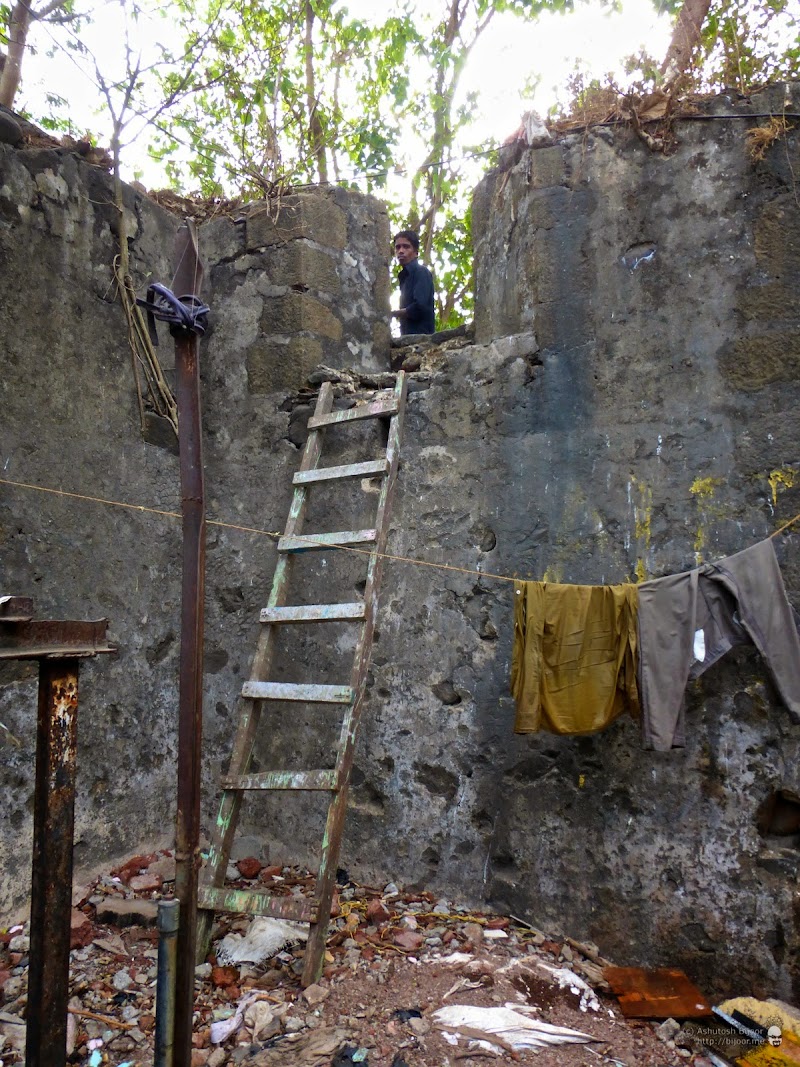 The fort does not seem to have any proper entrance, and the only way to get in was for me to climb over the ramparts. Lakshman Zanke’s son helped me by putting a rickety ladder that I used to climb up and into the fort

The internal area of the fort seems to be completely filled up, and overgrown with vegetation and the unfortunately inevitable garbage left by previous visitors. (scroll the image horizontally to see the entire panorama) 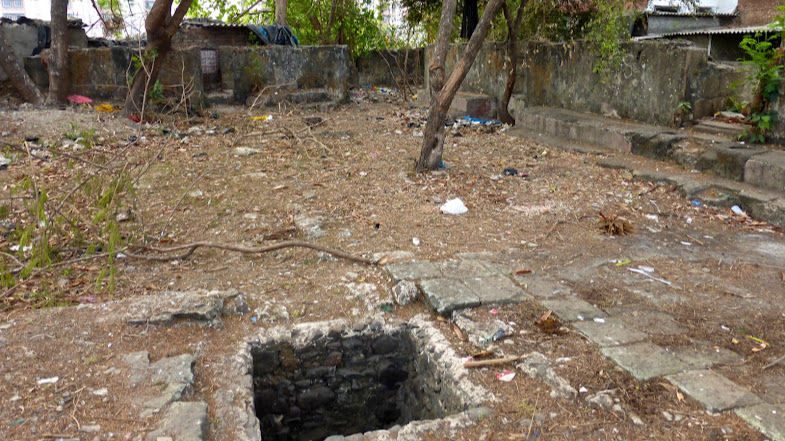 The fort has three bastions and a central area in which there seem to be signs of some chambers underneath. A square hole that looks like the entrance of a tunnel invites me to investigate it 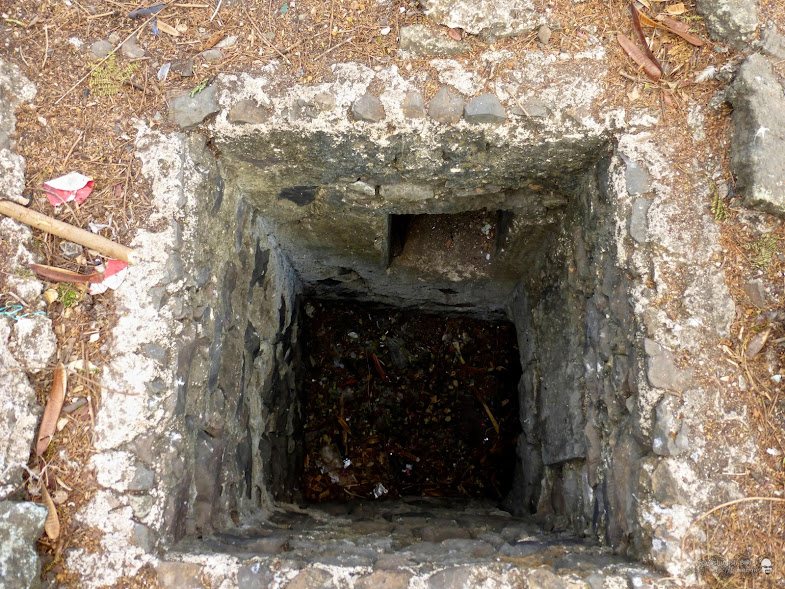 Looking into the hole, it does not look very inviting, and I’m afraid it may be full of dirt or garbage. So I tentatively jump in prepared for the worst 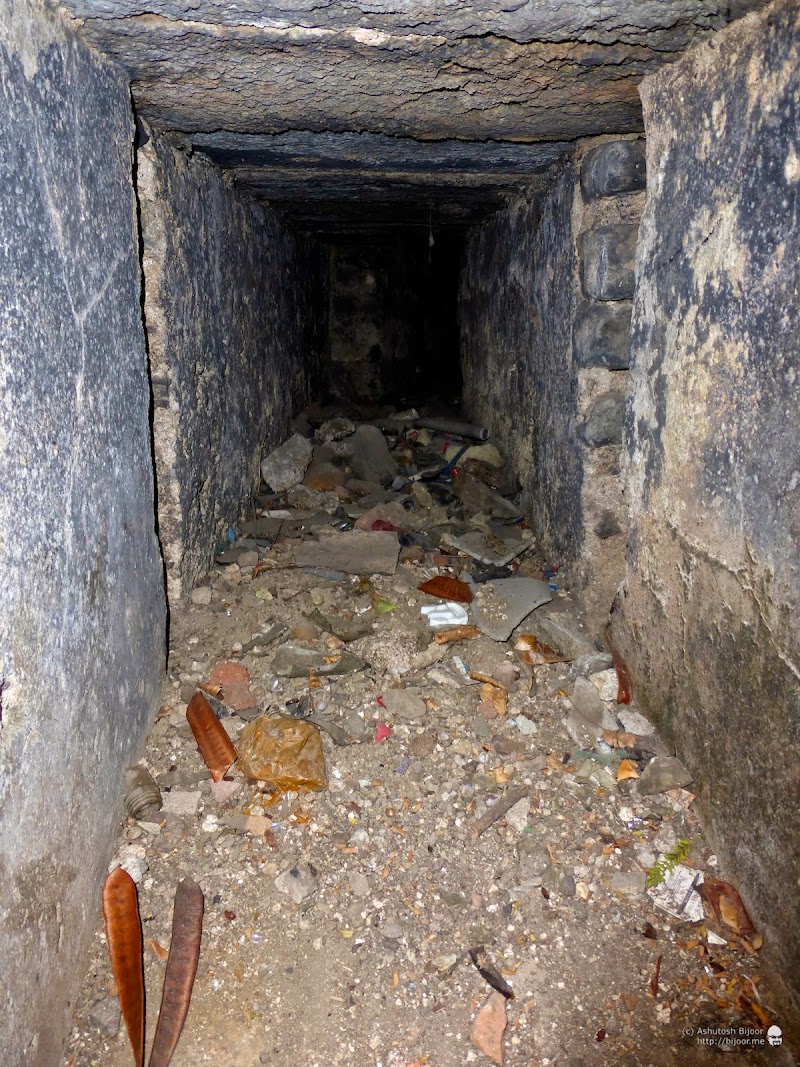 But luckily though its dark, it was not dirty or stinky – thankfully full of just mud and dried leaves. I find another tunnel leading perpendicular to the entrance and crouch into it 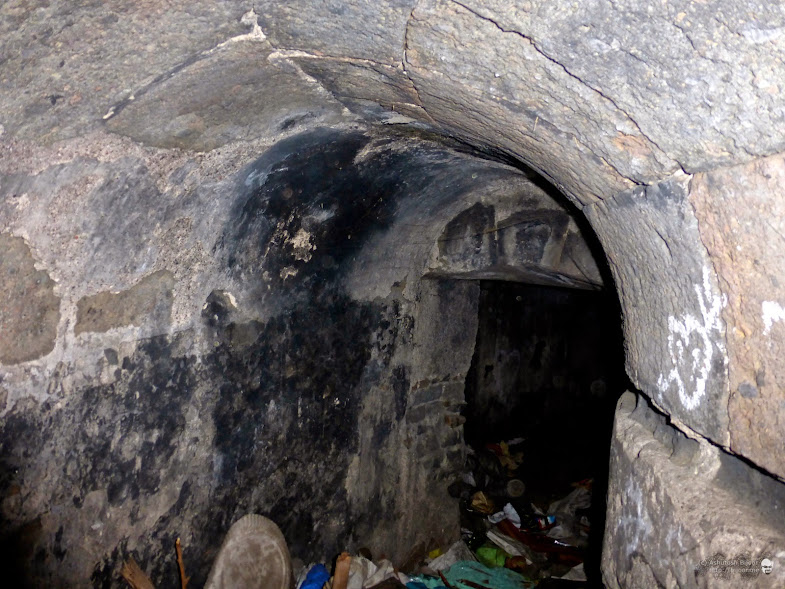 After a short distance, the tunnel turns to the right and broadens out into a small doorway… reminds me of Alice in Wonderland! 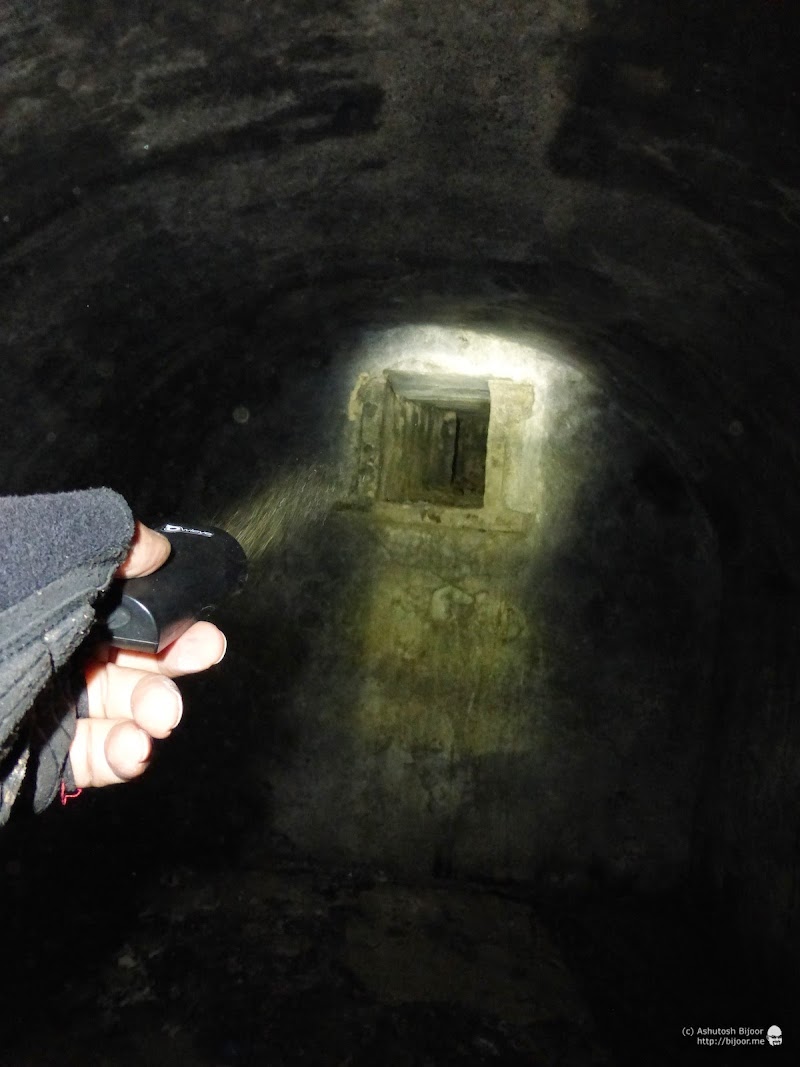 I had carried the headlamp of my cycle as a torch, and as I entered the doorway into a small chamber, I used it to look around, noticing another small window at the far end 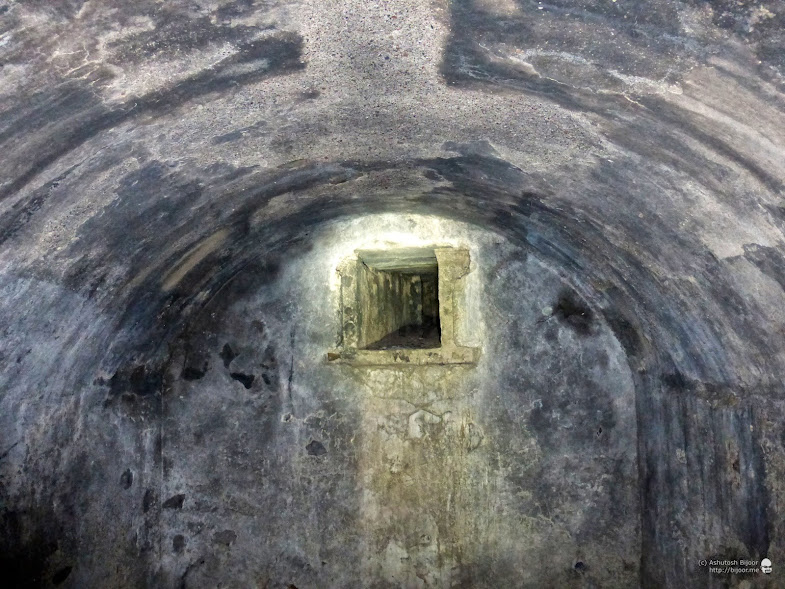 I used the camera flash to click a photograph to get a better idea of what it contained. The smaller window on the far side seemed just too small for me to enter, and so I gave up my investigation at this point, and decided to get out of the hole 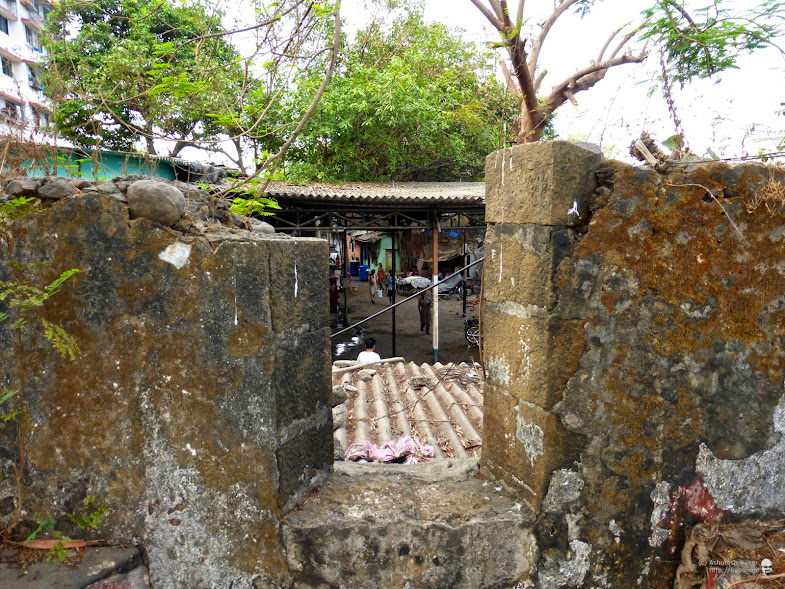 After having safely made it back out of the tunnel, I looked around from the ramparts to see life as usual on a Sunday morning in the slums around the fort 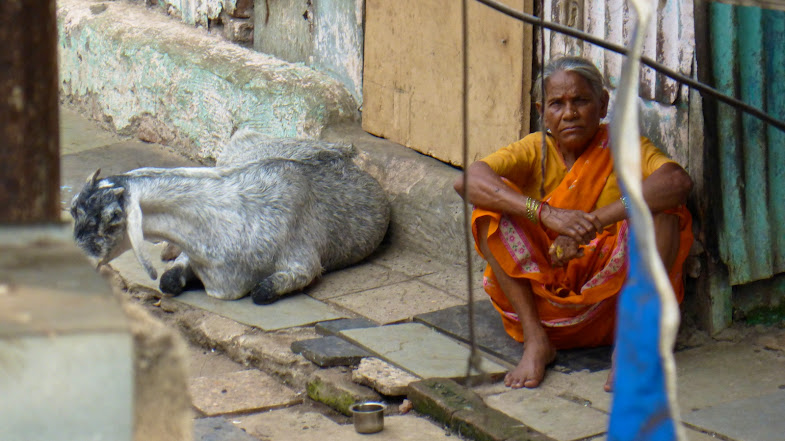 I noticed this old woman and a goat share a quiet moment together… I imagined both of them relaxing after a busy morning, thinking ahead about their next meal 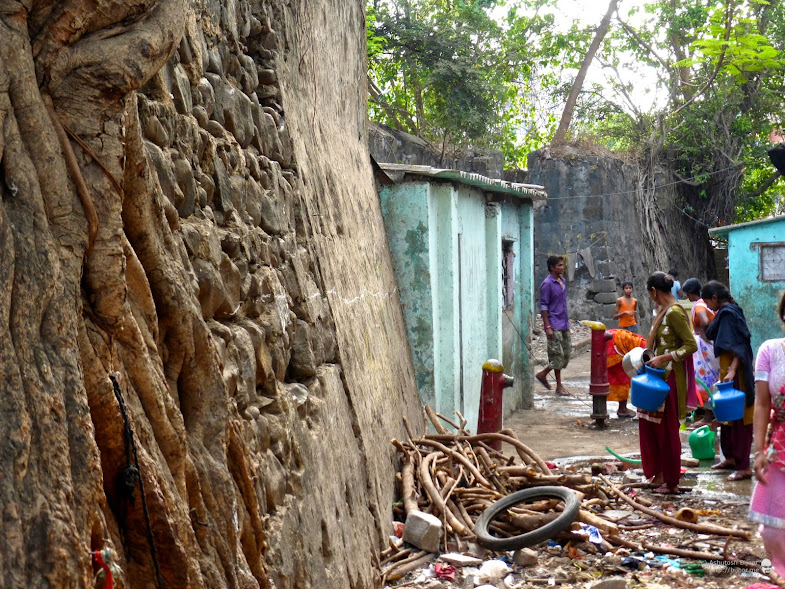 After climbing back down the ladder, I circled around the fort noticing the slum dwellers going about their chores, indifferent and unmoved by the historical significance, or the mysteries and stories that must be associated with this old monument amidst their homes 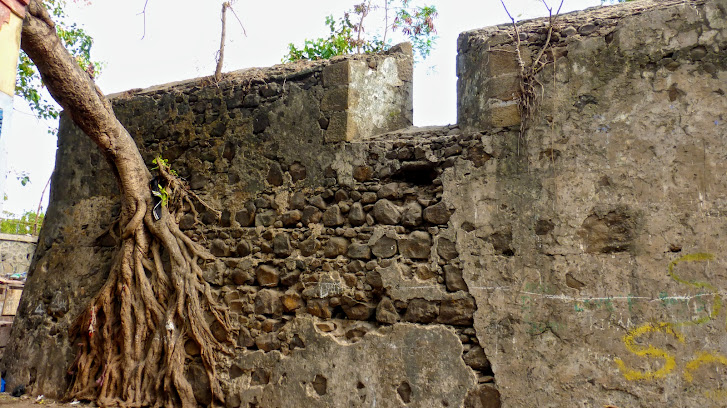 I’m sure that with a little bit of effort on the part of people like us who are interested in the history of the place we live in, we can easily maintain these sites by simple investment of time to clean them up and increase awareness about their history 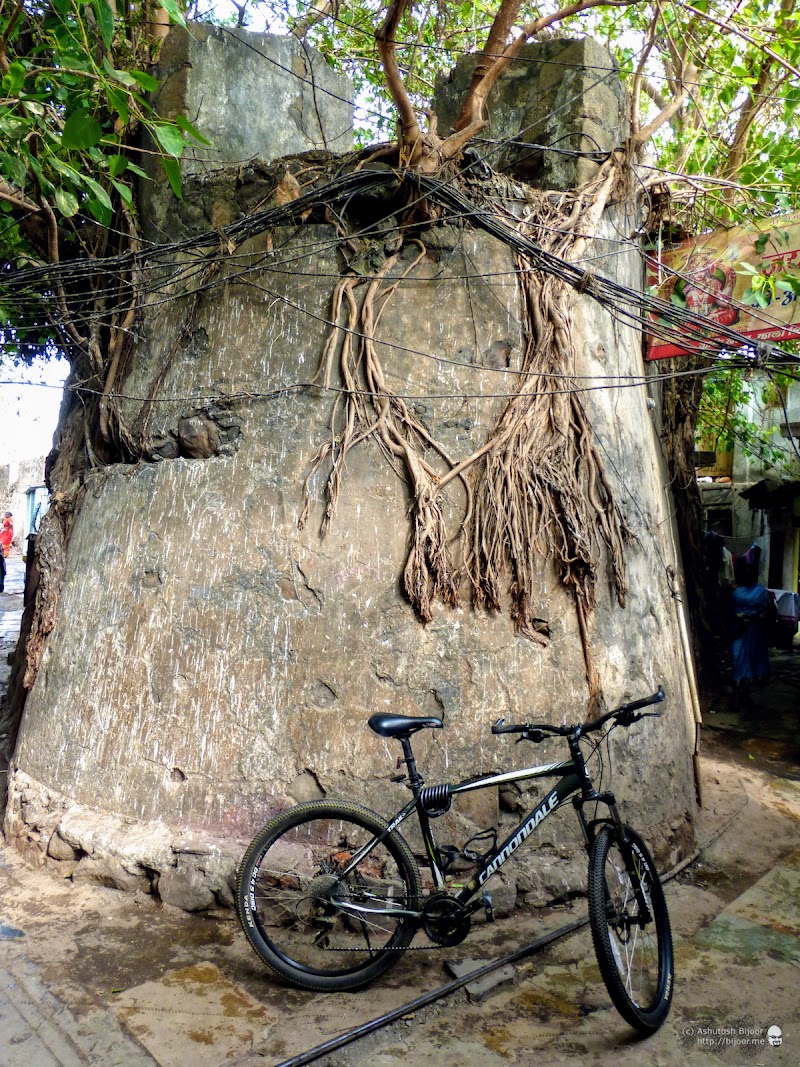 Determined to come back with the intention of doing a cleanup job with a larger group of interested people, I got back on my cycle and headed back 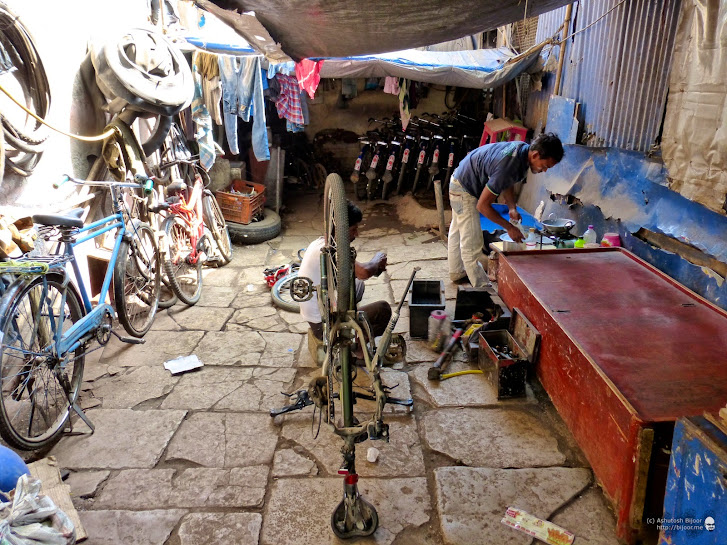 On the way back I had a puncture and stopped by at a local cycle shop to get it fixed… and much to the admiration of the mechanic, I showed off my toolkit by removing the tube without damaging the wheel and only allowed him to fix the tube 🙂

I was really happy to have discovered the fort, and to find it in a relatively undamaged condition and vowed to come back with a bigger group to clean it up and figure out a way to make its maintenance sustainable with the help of the slum dwellers around it. Any ideas? Please comment.