The coast of Maharashtra are lined with over 90 forts all the way from Dahanu near the border of Gujarat down to Tarekhol at the border of Goa. The two north-most coastal forts are Dahanu and Tarapur. They are both located at picturesque locations along pristine beaches, and make for a great holiday destination. Accessible via road or by rail, both locations are close enough to each other to combine in a single visit. 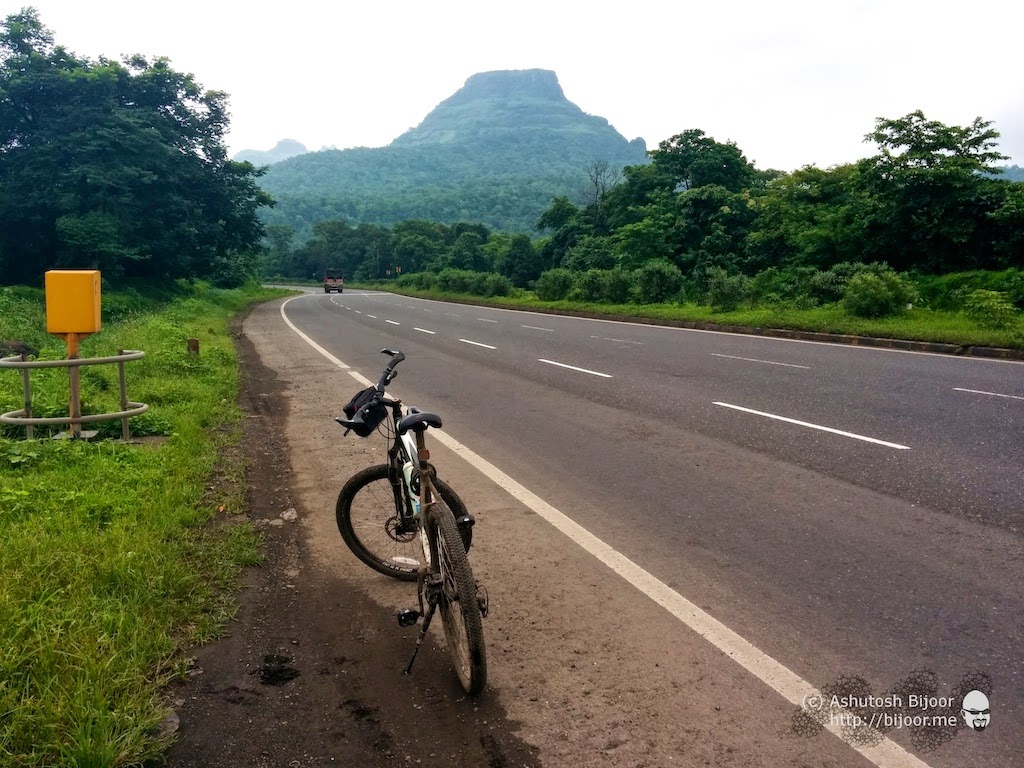 I started out from Andheri at 5 am, cycling along NH8 towards Charoti junction. The ride was peaceful – good road surface, not much traffic, and as soon as one crosses Vasai bridge over Ulhas river, the concrete jungle of Mumbai gives way to a vibrant green thanks to the monsoon 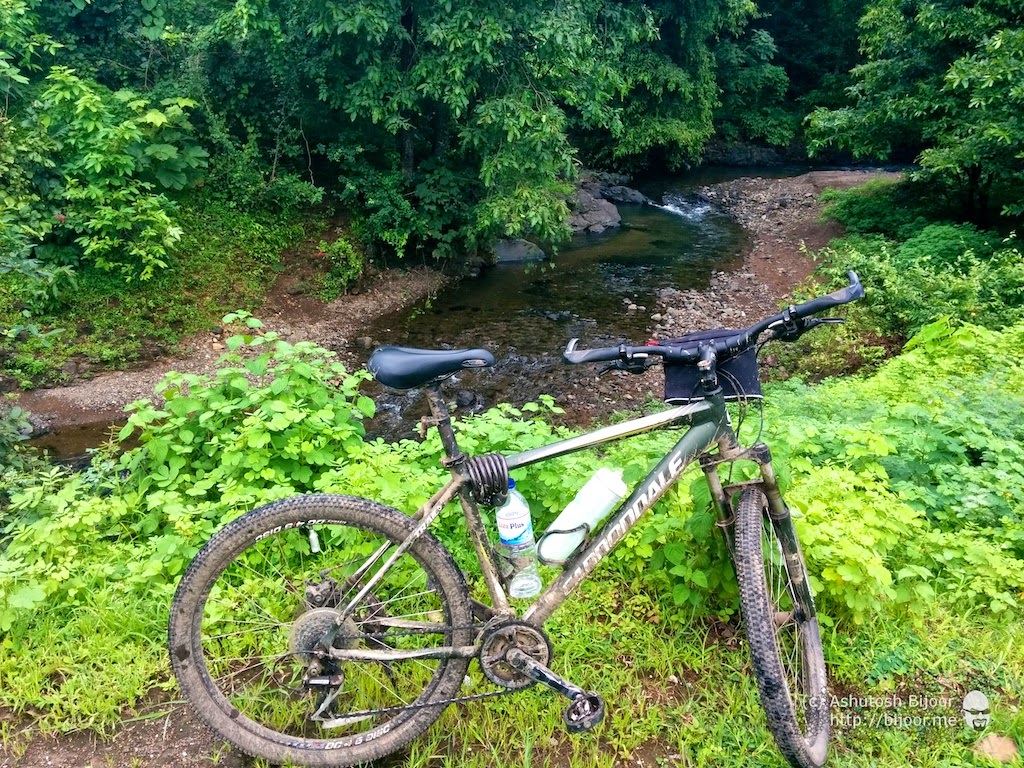 There are streams of water running all along the highway – their beauty hidden from the motorized vehicles that zoom by, filled with people cooped up in metallic prisons – what a pity! 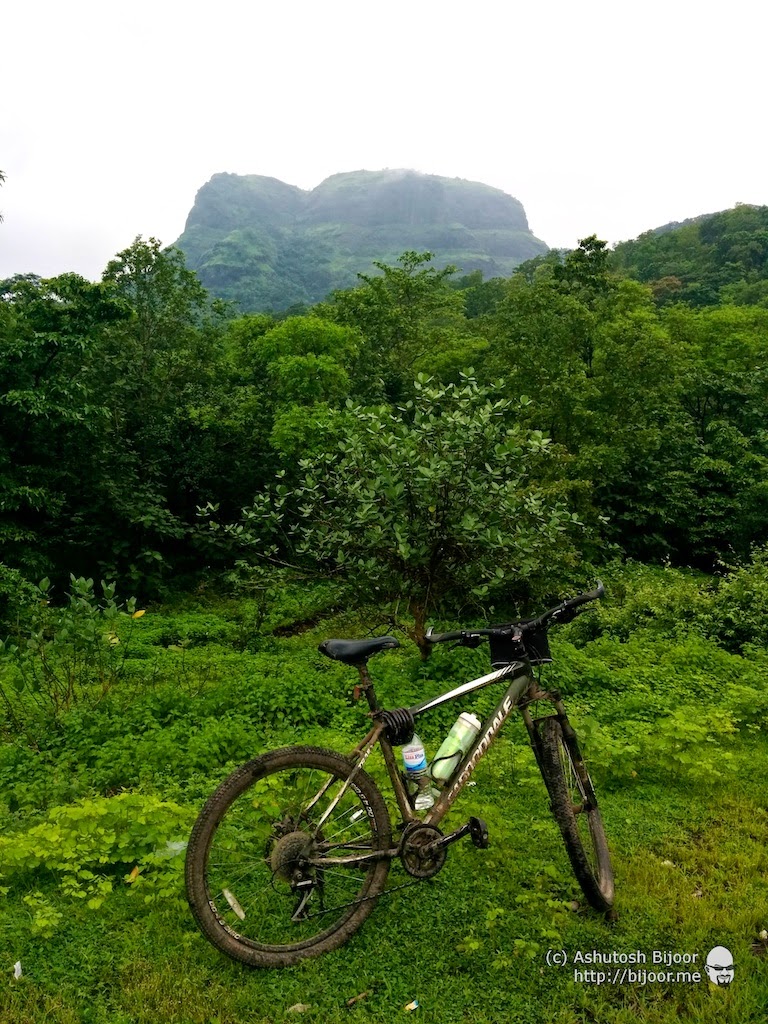 I passed by the mighty mountain of Asherigad, reminiscing of the exciting trek we did a few months back, ensconced in Sag teak forests that were the raw material for building boats and ships in the years gone by 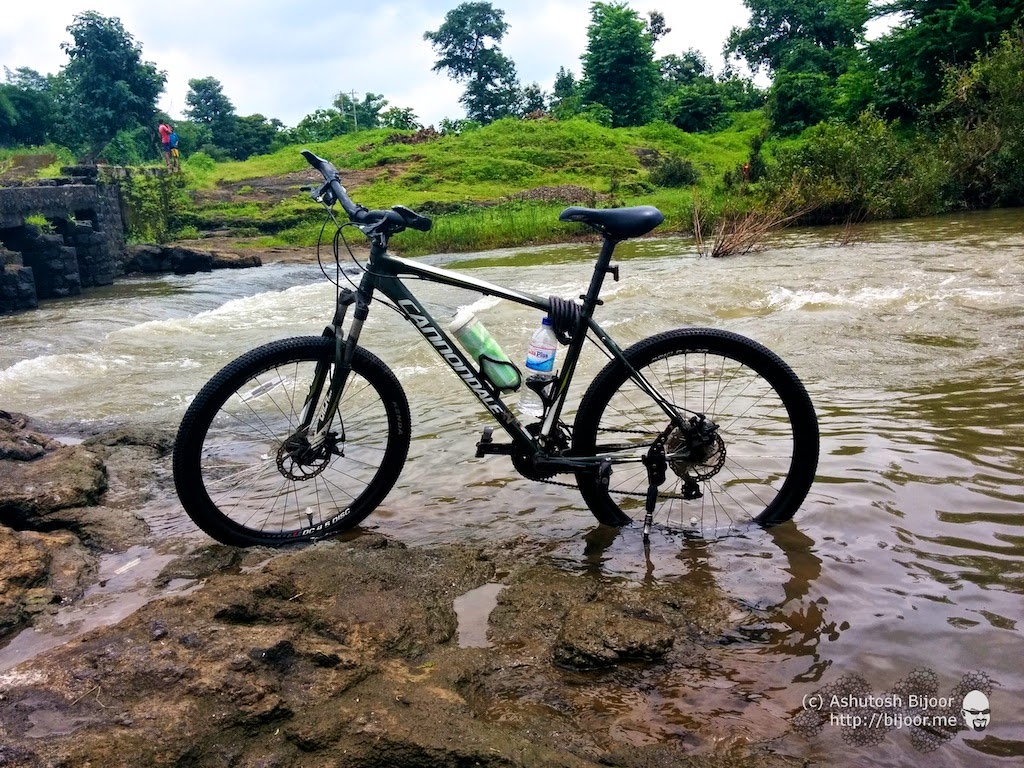 At Charoti, I turned right on the Dahanu Jowhar road that leads up to Dahanu. Along the way, I noticed this bustling stream flowing under a bridge, and stopped by to take a wash and give one to the cycle too.. that got us refreshed and ready to ride the rest of the way to Dahanu 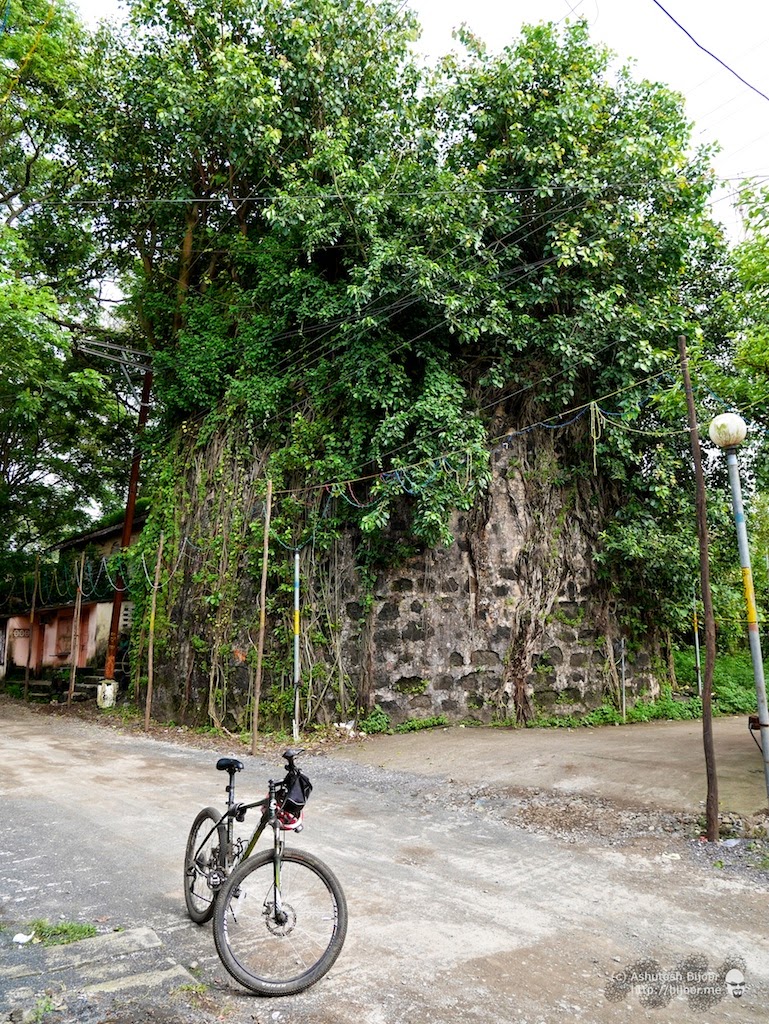 I reached Dahanu Fort at around 1 pm – after about 7 hours of riding plus an hour of breaks. Dahanu fort is on the right bank of the Dahanu river, at its mouth just before it empties its waters into the Arabian Sea, 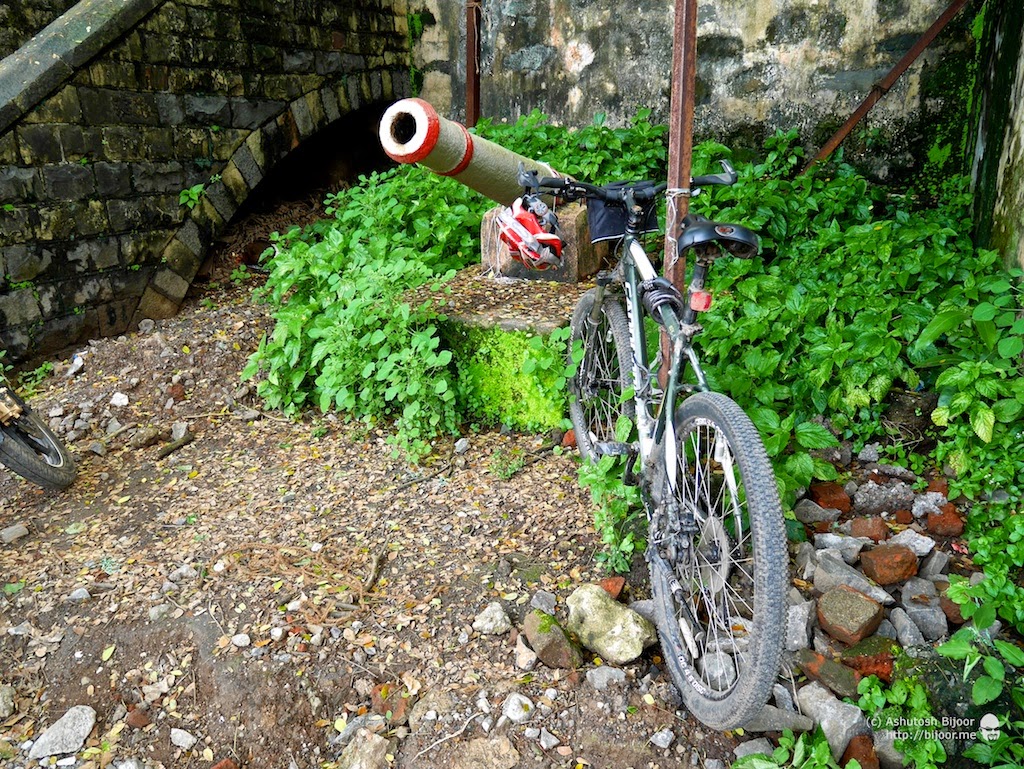 On either side of the main gate of the fort are two old cannons – probably British in origin. Dahanu is an ancient city, with references to the river “Dahanuka” found in inscriptions dating back to 119-124 AD found in caves at Nashik (ref) 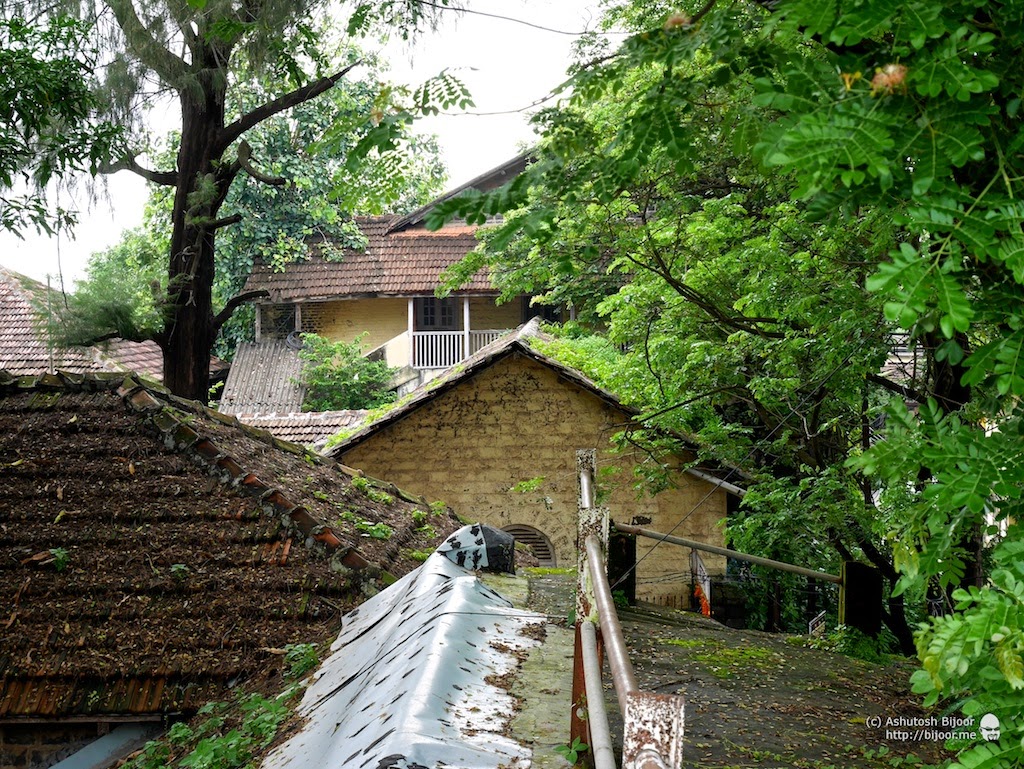 The interior of the fort is now filled with various buildings and occupied by the Tehsildar’s office, a police outpost including a jail with 4 empty cells, an outpost in one of the bastions, a customs office and a few residential quarters for the police (ref) 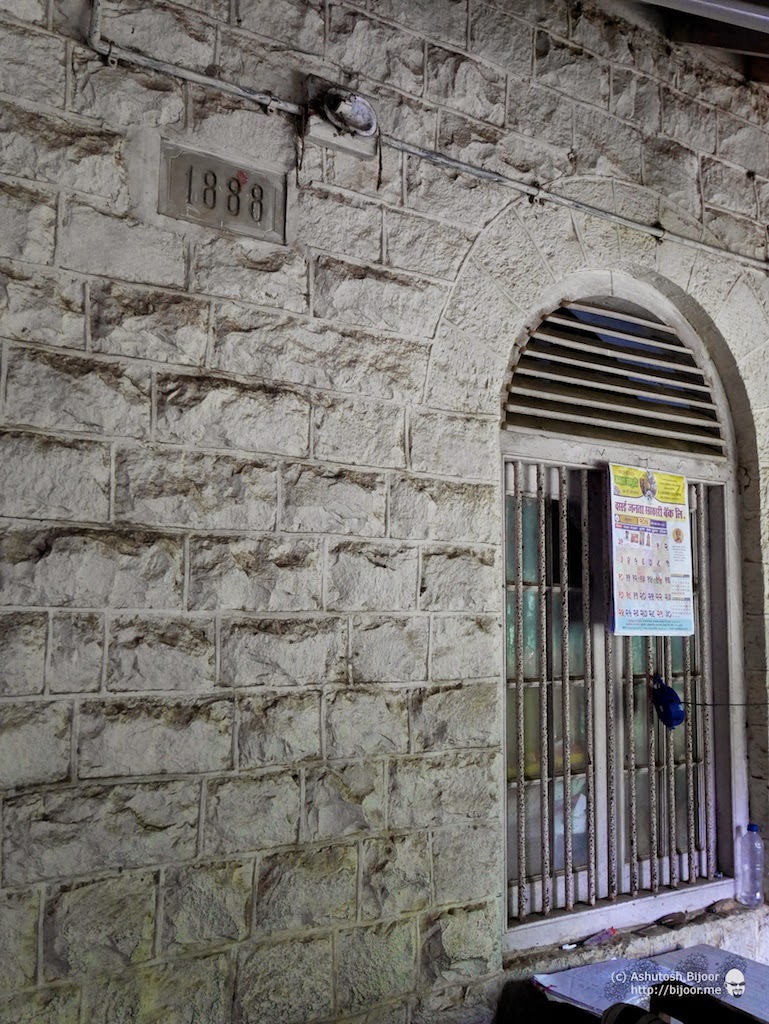 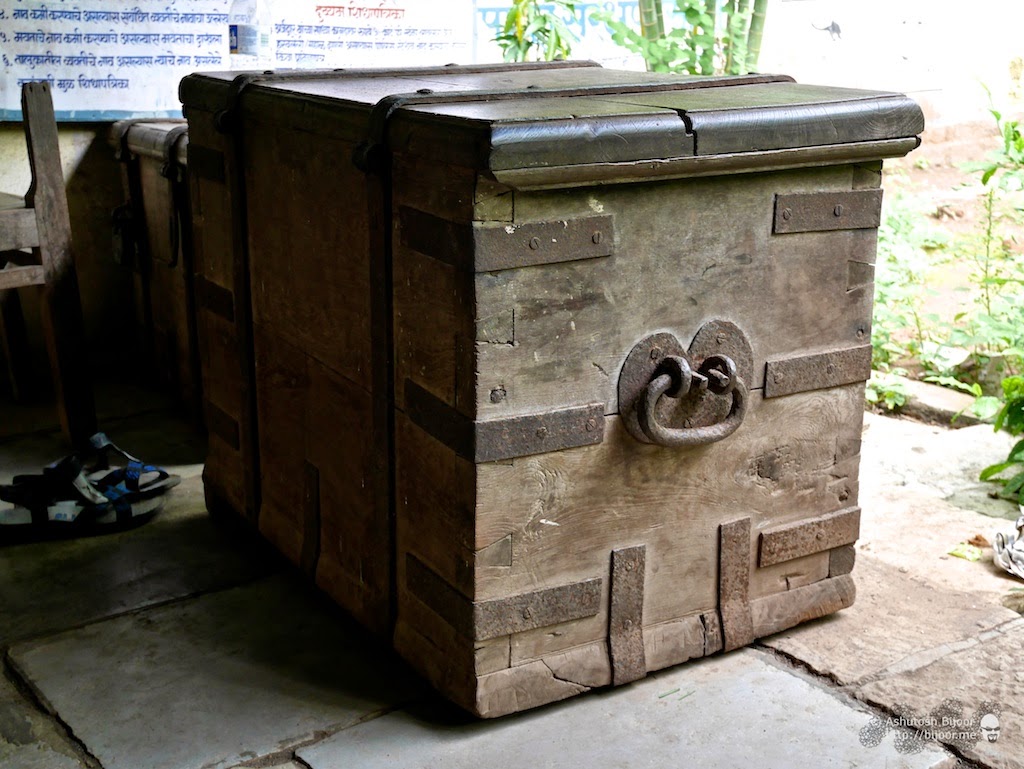 The fort went through several hands – starting in 1533 AD with the Portuguese – who were ousted in January 1739 by the Maratha chieftain Chimaji Appa – and later handed over to the British as part of the Bassein Treaty in 1817 AD.
This building housing the customs office was built in 1888 by the British, and contains several old wooden chests containing old documents 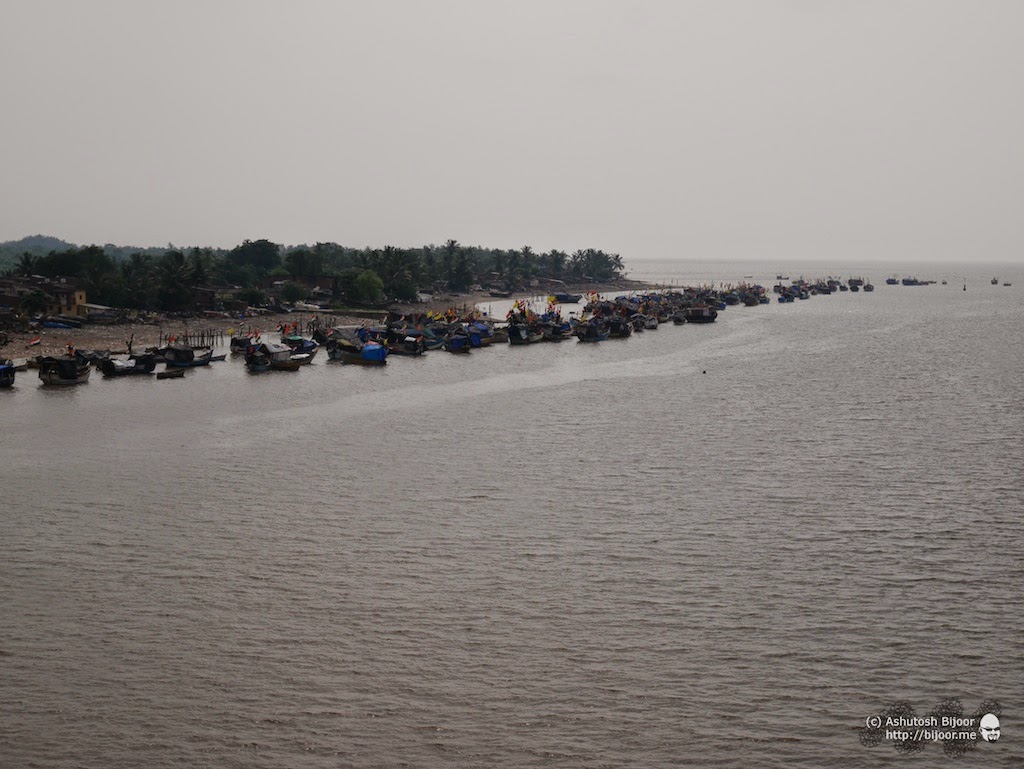 After Dahanu I headed south towards Tarapur, crossing a bridge over the Dahanu river. The view of the fishing boats moored at the mouth of the river, with the salty sea breeze whistling in your ears is mesmerizing. But I still had a long way to go, so I took a short break and rode ahead 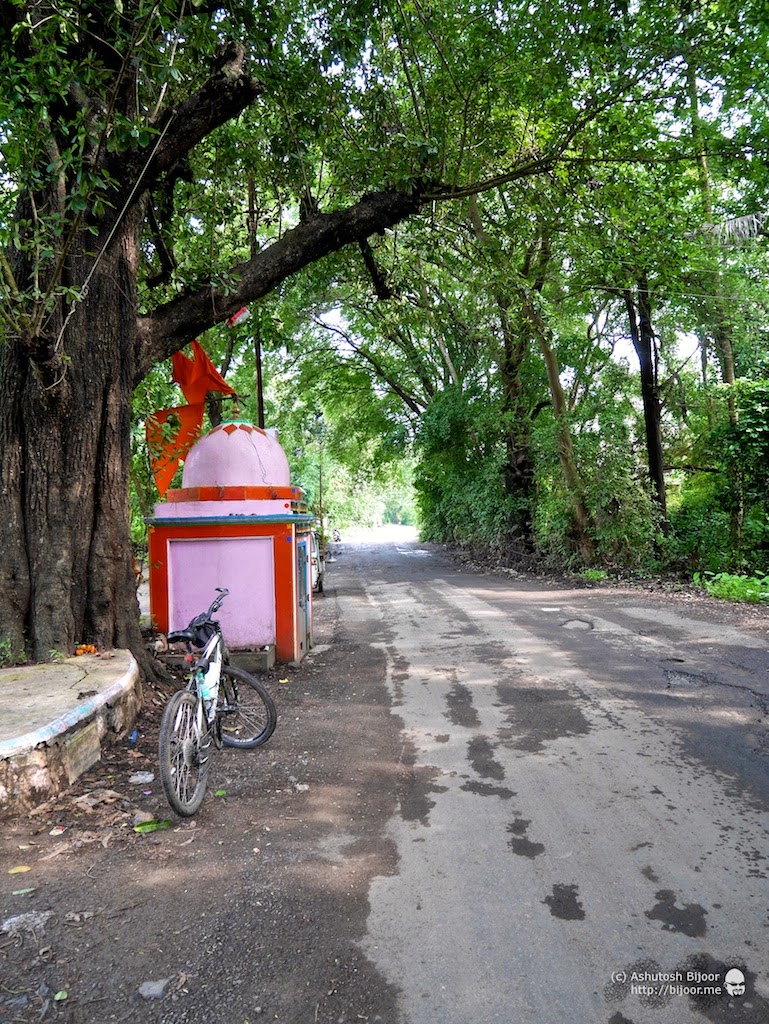 The road from Dahanu to Tarapur is a small road with a reasonably good surface – and passes through several small fishing villages with shady groves and rice fields on either sides. This road extends down all the way to Kelve Beach – a route we had taken for the Four Forts Ride 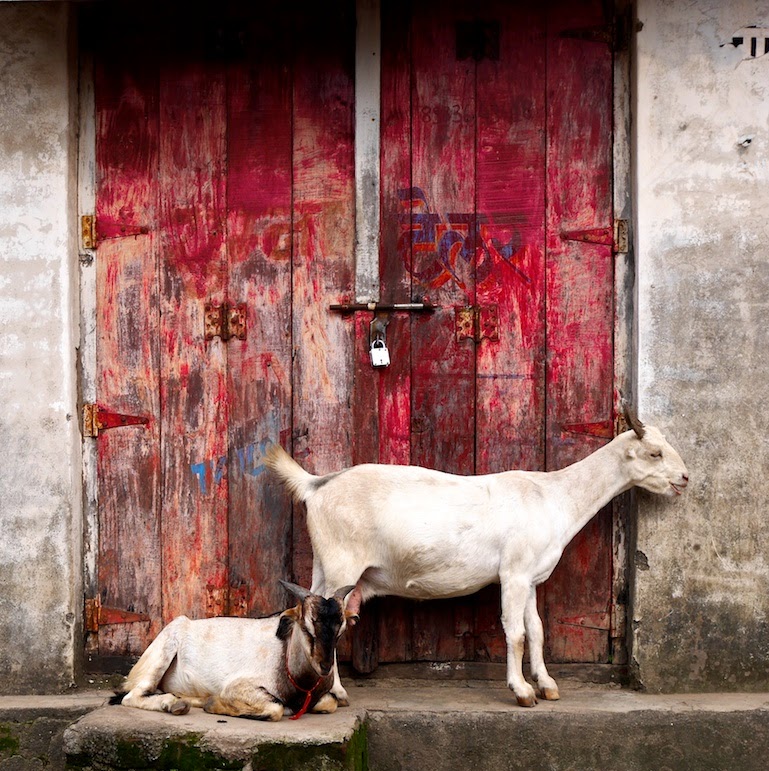 As I arrived in Tarapur, the village road is lined with shops – most of them closed for the weekend and presumably the Ganapati festival. This closed shutter of a tailor’s shop was a nice resting place for these goats. 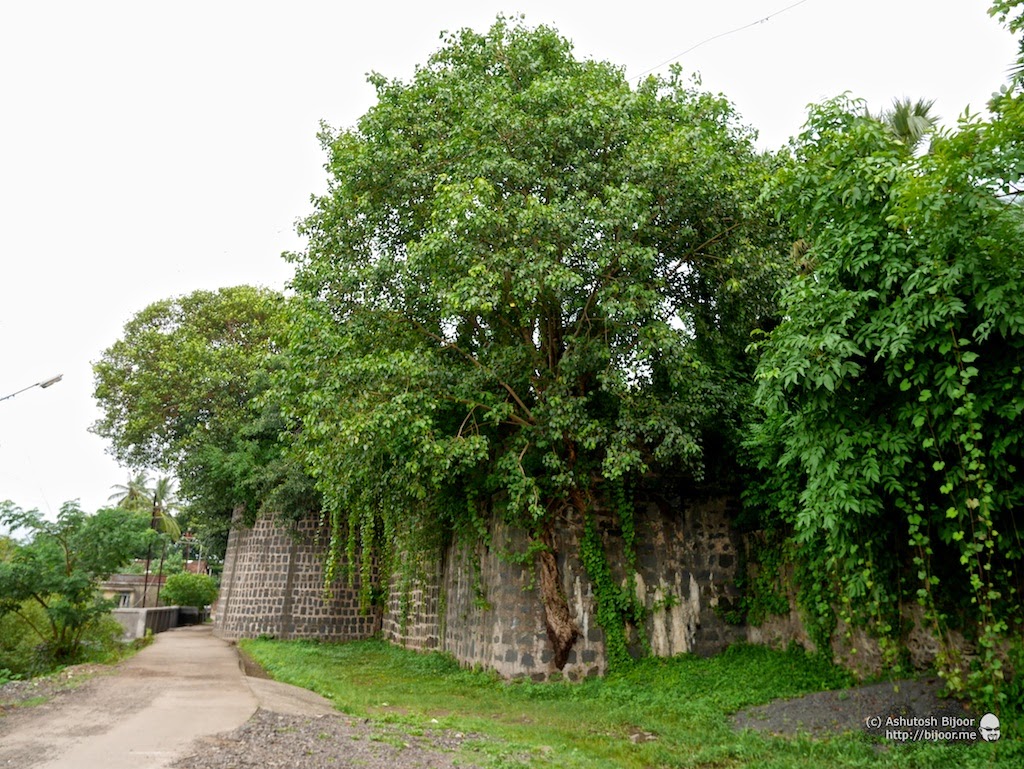 Tarapur fort is located on the southern bank of the Tarapur creek. It can be accessed by a small concrete path that leads towards the sea from Tilak Road, just next to the junction of Tarapur Boisar Road 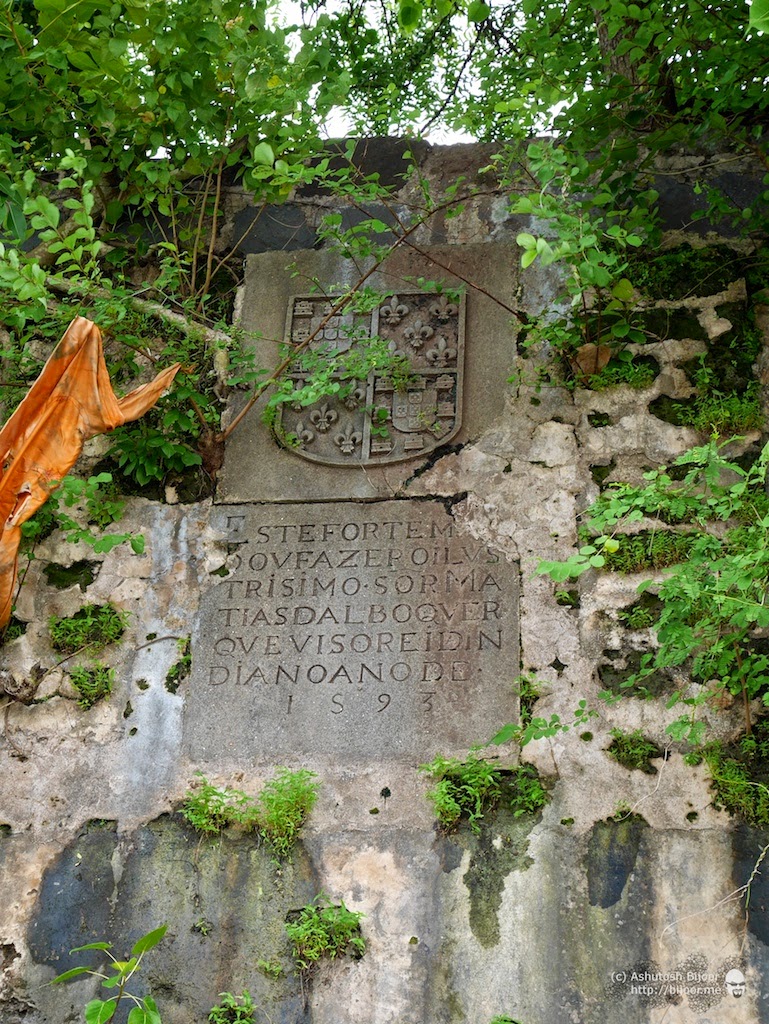 Tarapur fort was built in 1593 by the Portuguese, over an older construction in 1290 attributed to Raja Bhimdev. It is almost square in shape with 30 feet high and 10 feet wide walls enclosing an area of about 500 sqft. On the eastern wall facing the creek, is an engraving of a Portuguese Coat of Arms, with an inscription dated 1593 (ref) 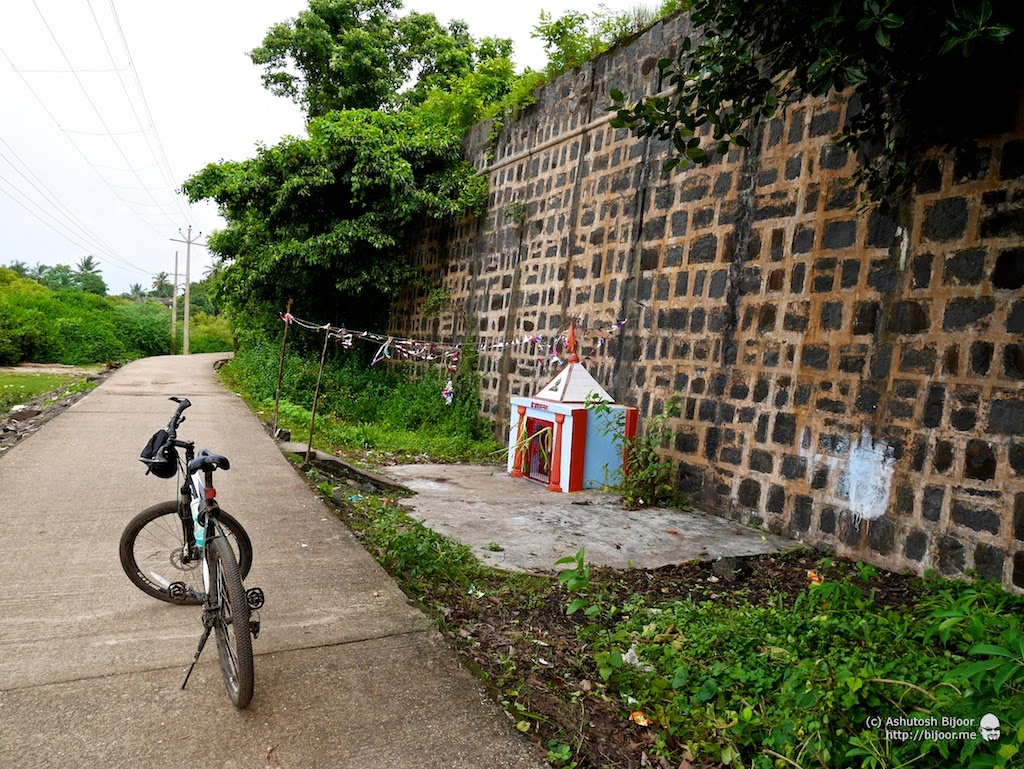 The fort walls seem to be in a pretty good condition – probably restored – as evidenced by the cement fillings in the stone at some places. A moat that surrounded the fort is now filled up and a small mud path leads all the way around. 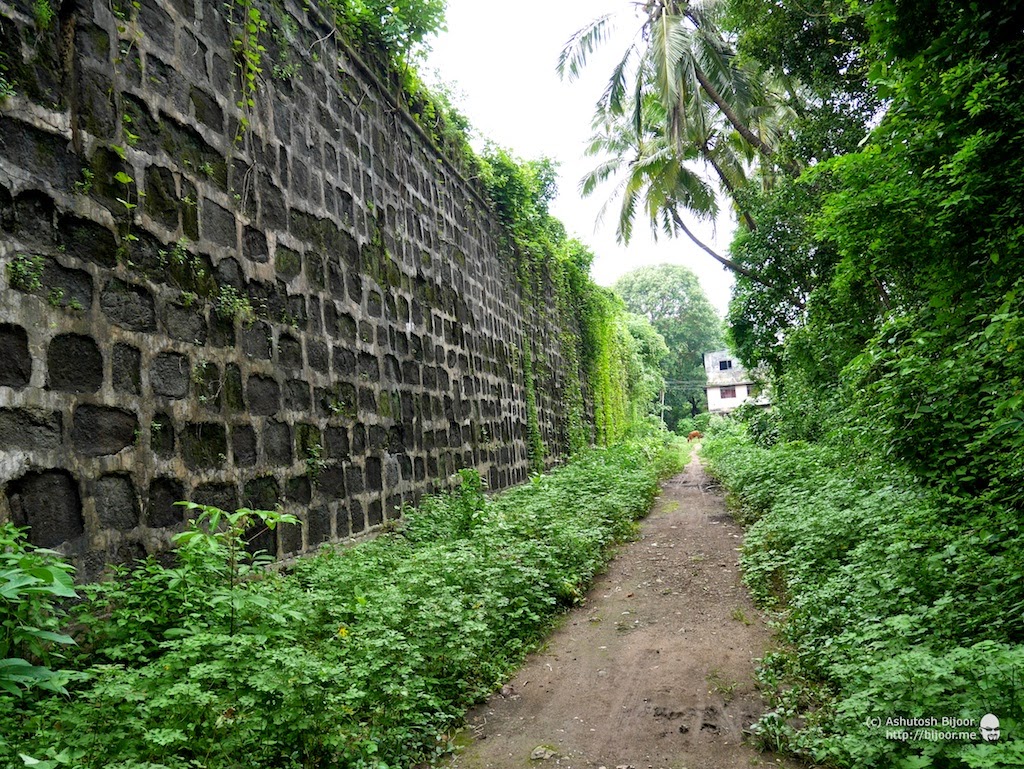 The walls are owned by the government but the interior land is owned by Vikaji Mehrji – who was awarded the land by the Peshwa for a hundred years, and is still held privately by his heirs 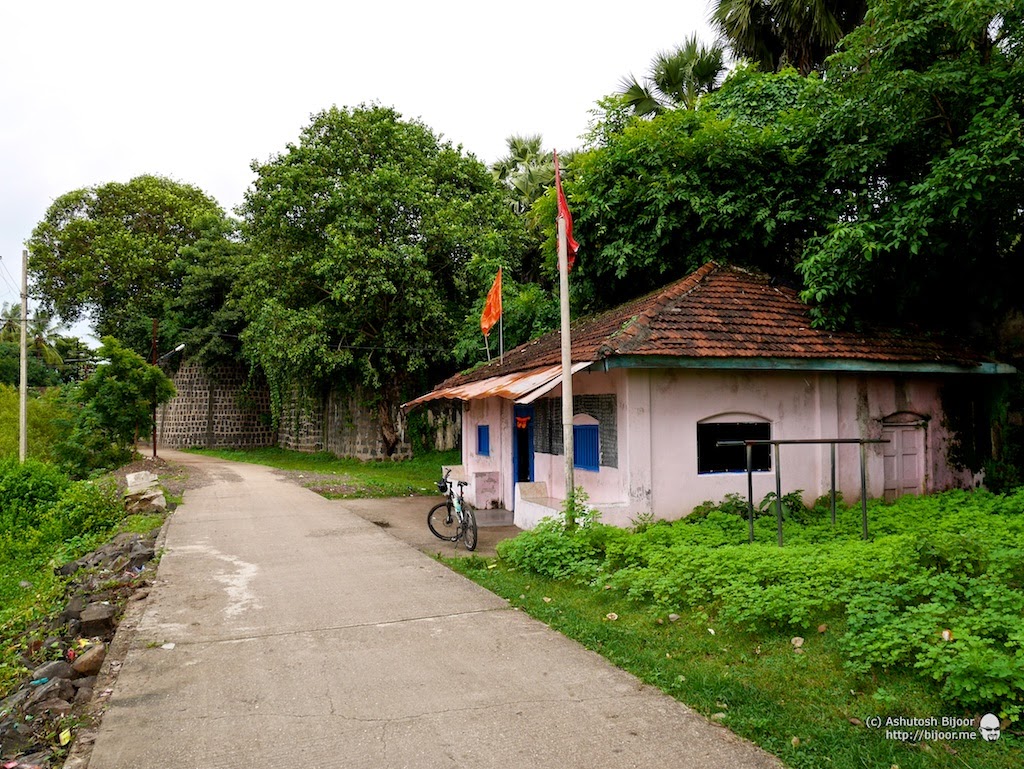 On the south of the fort adjoining the wall is a Hanuman temple built by the Marathas. The temple is built with limestone walls with a tiled roof – but the priest informed me that they are planning to raze it to the ground and build a new one in its place – what a pity! 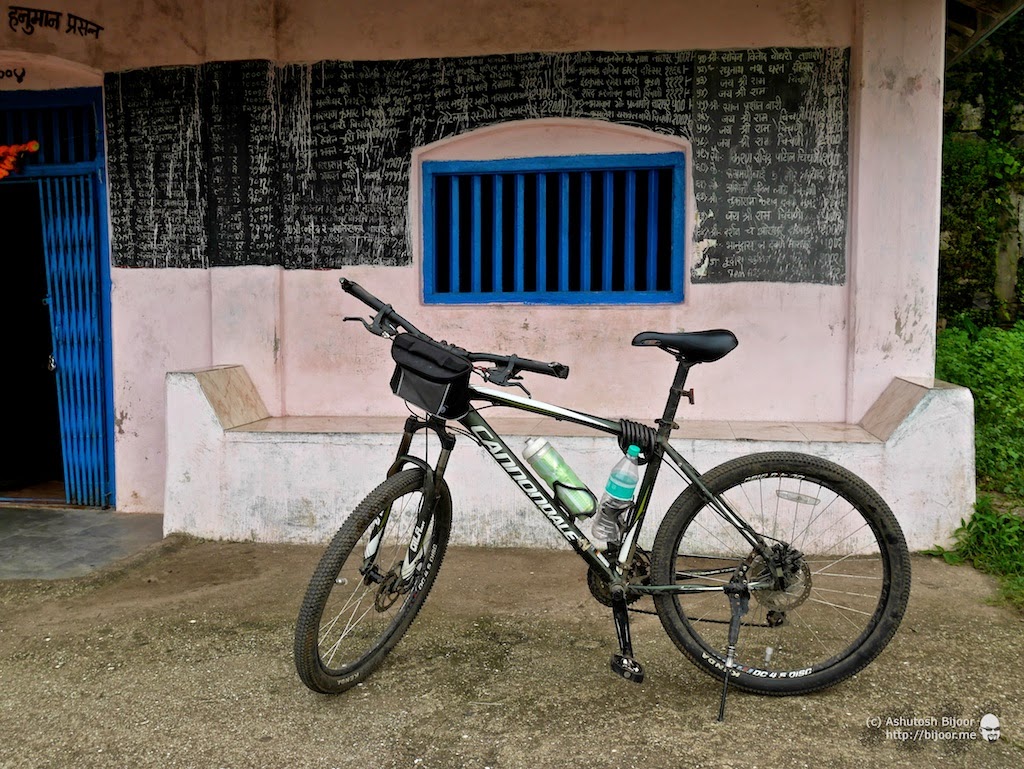 On the wall outside, around the window is a black strip on which devotees have written various names of God – a practice I have not noticed elsewhere 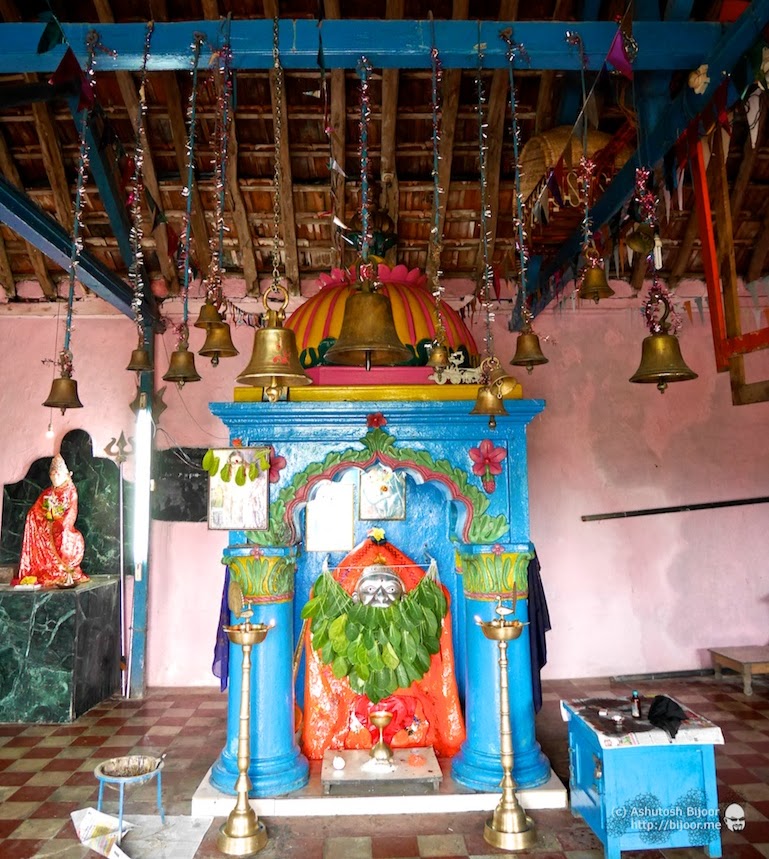 The brightly painted idol and the mandap are decorated for the occasion of Ganesh Chaturthi. The priest was kind enough to have given me the clue to get the keys to enter the fort 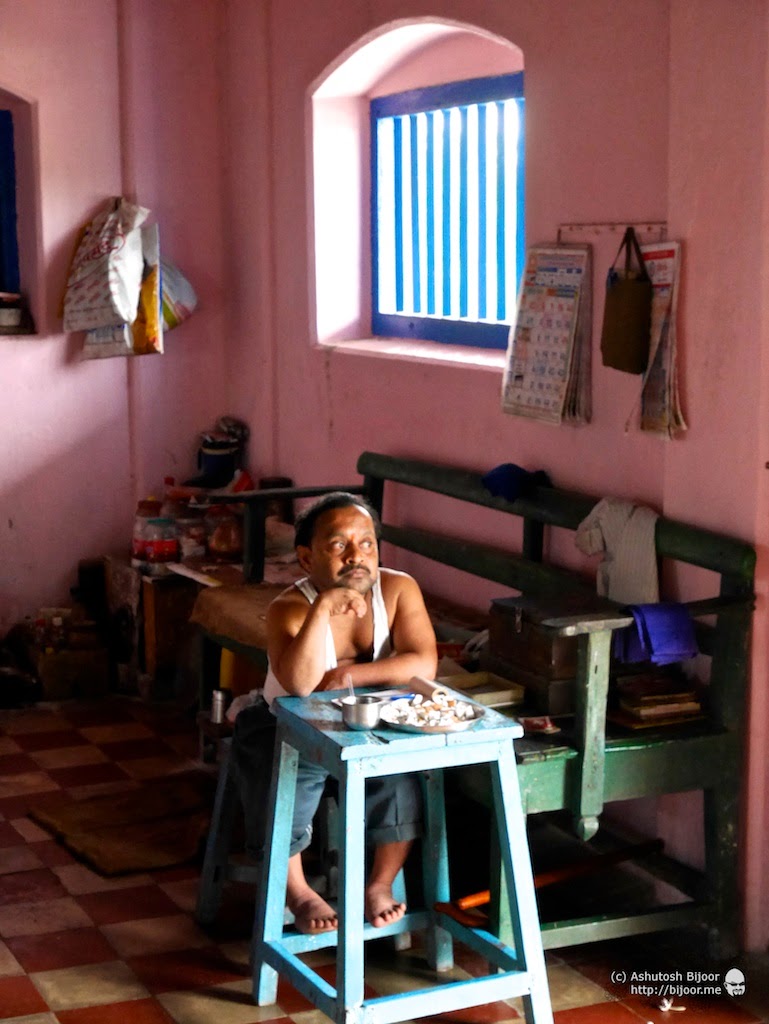 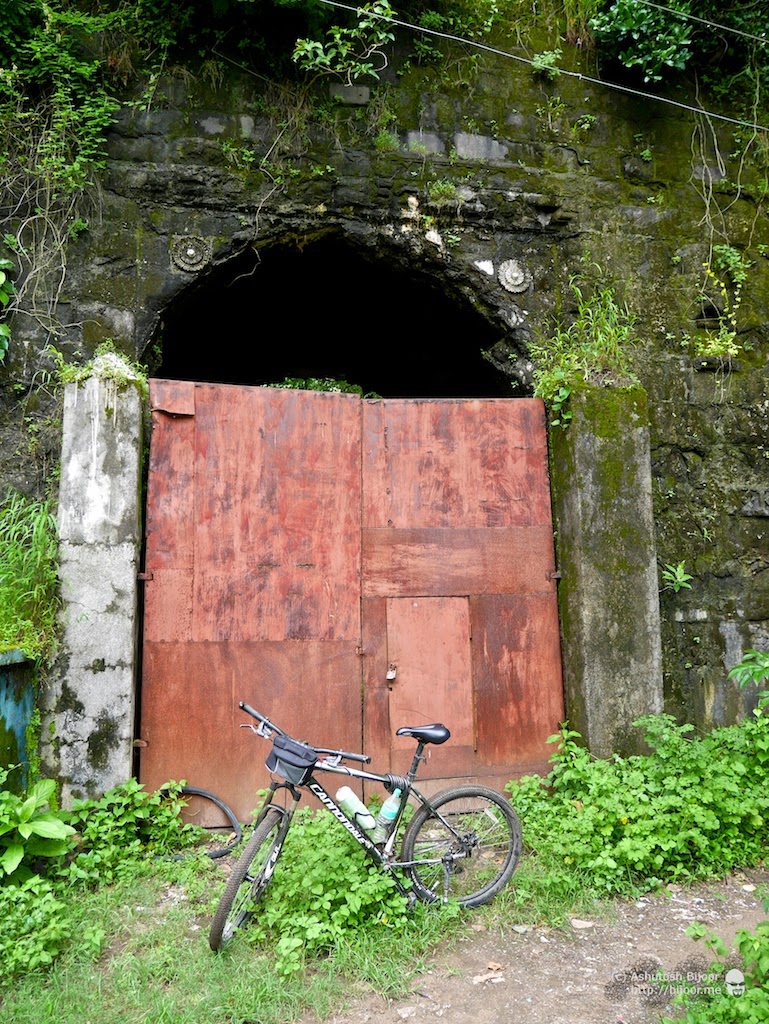 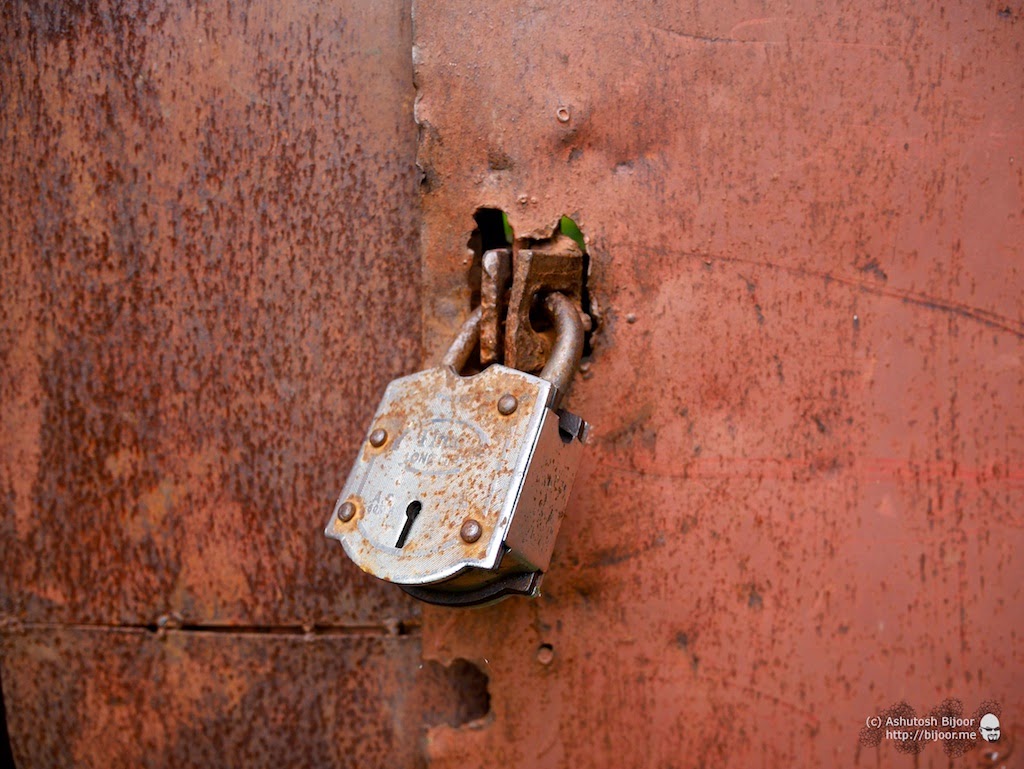 The main entrance of the fort is on the western wall, and is closed off by an iron door with a lock. Thanks to the priest’s clue, I was able to get hold of the key from a house nearby. They warned me of the mosquitoes inside, but gladly gave me the key – for there are few visitors to the fort who come asking for it. 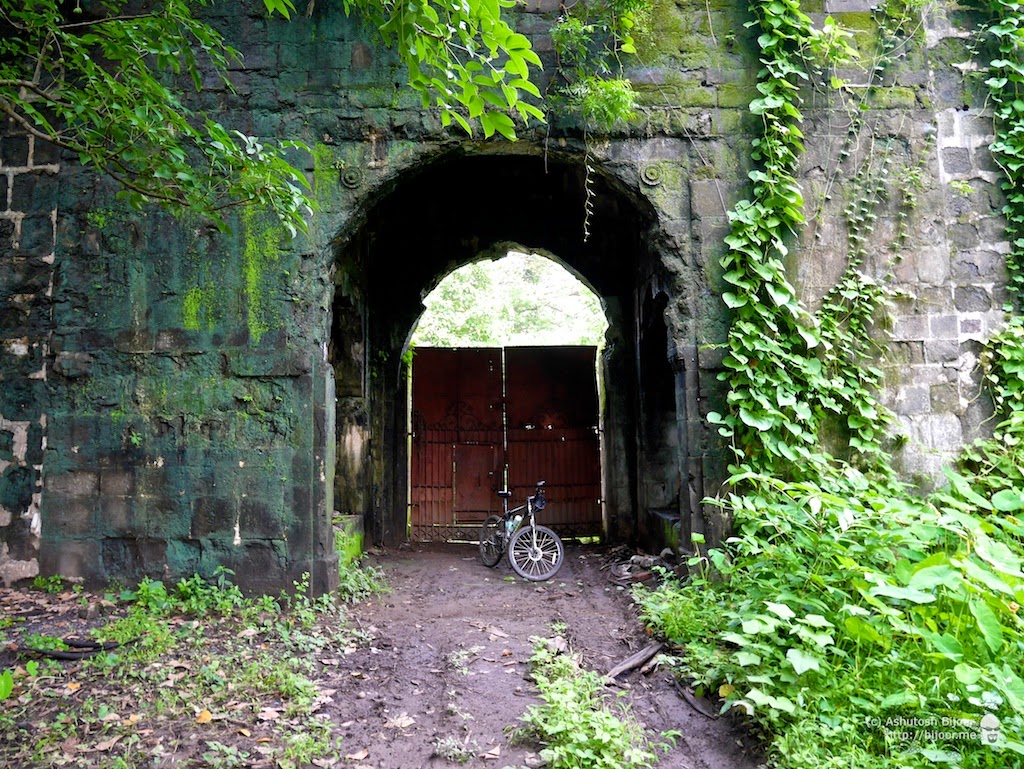 Once inside, I cycled along narrow paths between mango and coconut trees – and sure enough, I was attacked by a horde of mosquitoes – I had to keep moving lest they get the better of me. 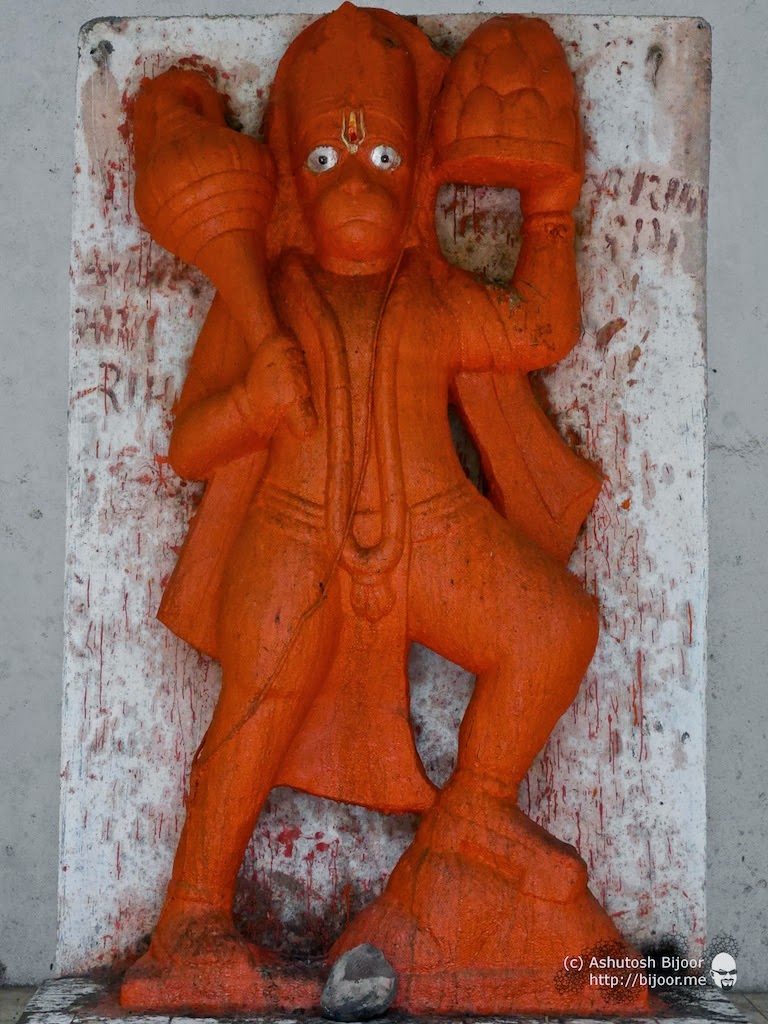 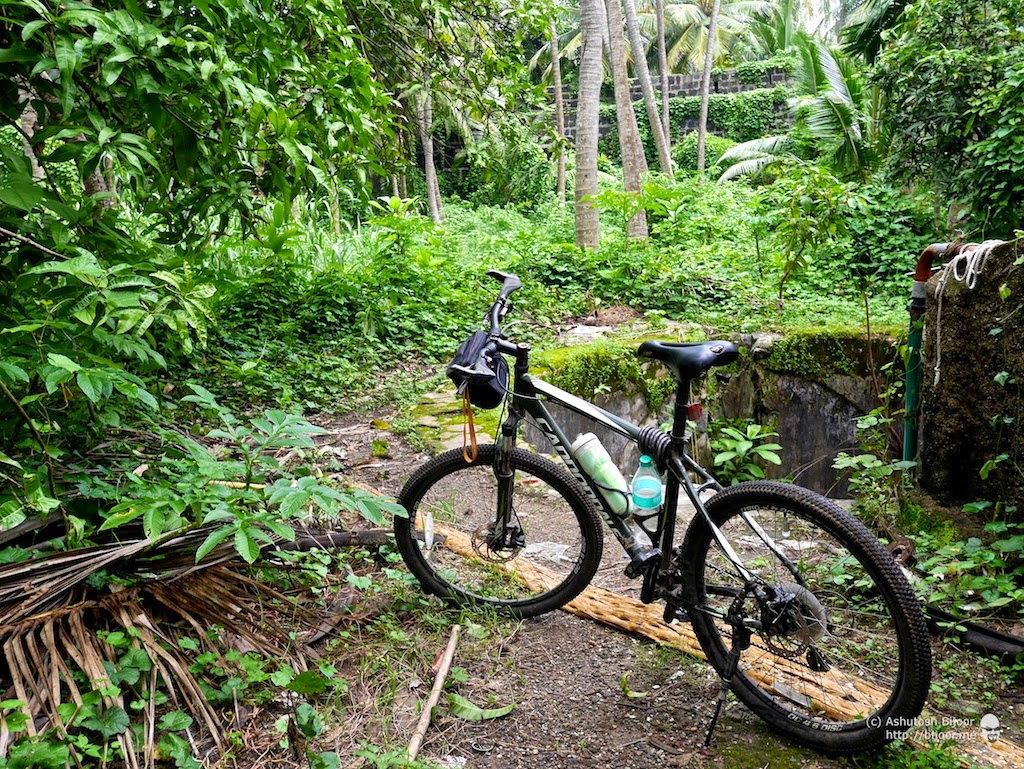 When the fort was being used by a Portuguese garrison, besides quarters for the garrison, it had a church, a Dominican monastery, and a hospital or misericordia. The garrison included a captain, a naik, ten peons, and a bombardier, a police inspector and four peons, an interpreter, a writer, a torchbearer, and an umbrella boy. Besides the garrison there was the vicar, and fifty Portuguese, 200 Native Christians, and about 100 slaves, good fighters and well armed with swords, lances, and guns (ref). All that remains now is a Hanuman temple and a well. 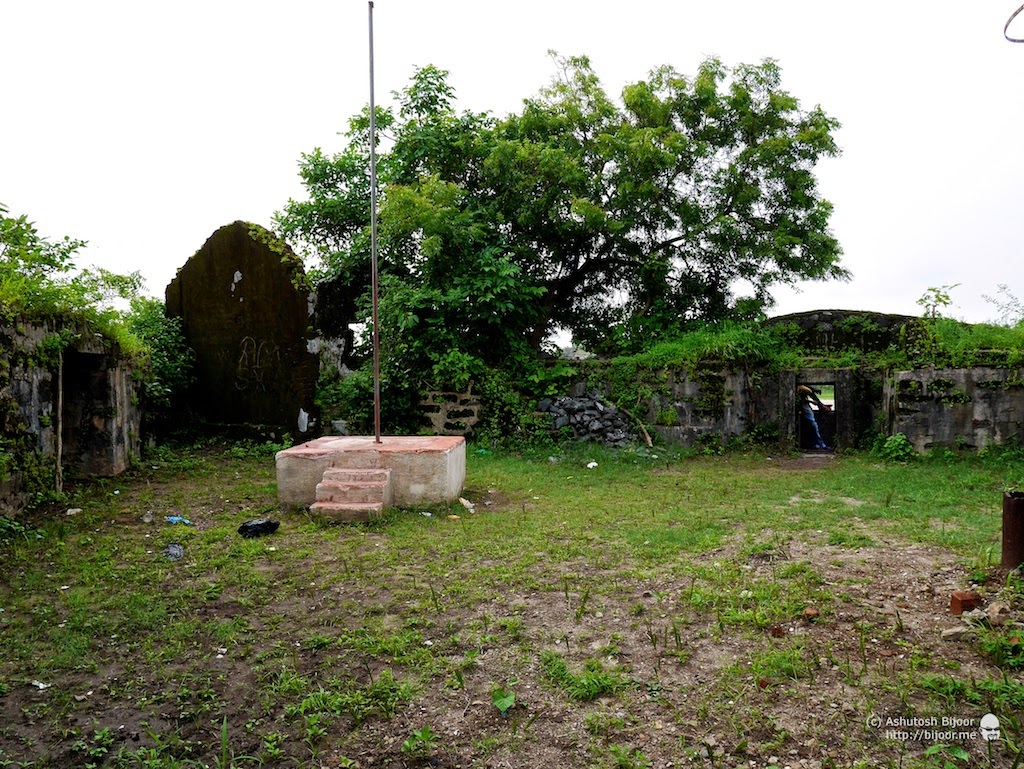 One of the bastions on the eastern wall is accessible from a newly constructed staircase. Here a flag pole bears mute testimony to a tumultuous past of the fort. The Portuguese garrison successfully defied attacks by the Habshis in 1559 and the Mughals in 1583 and 1612. However the Marathas captured the fort in 1739 when nearly the entire garrison was killed. The Peshwa Raghunathrao took shelter here when driven out of Pune and the fort was surrendered by him to the British. It finally came into the East India Company’s hands by 1803 as part of the Treaty of Bassein (ref) 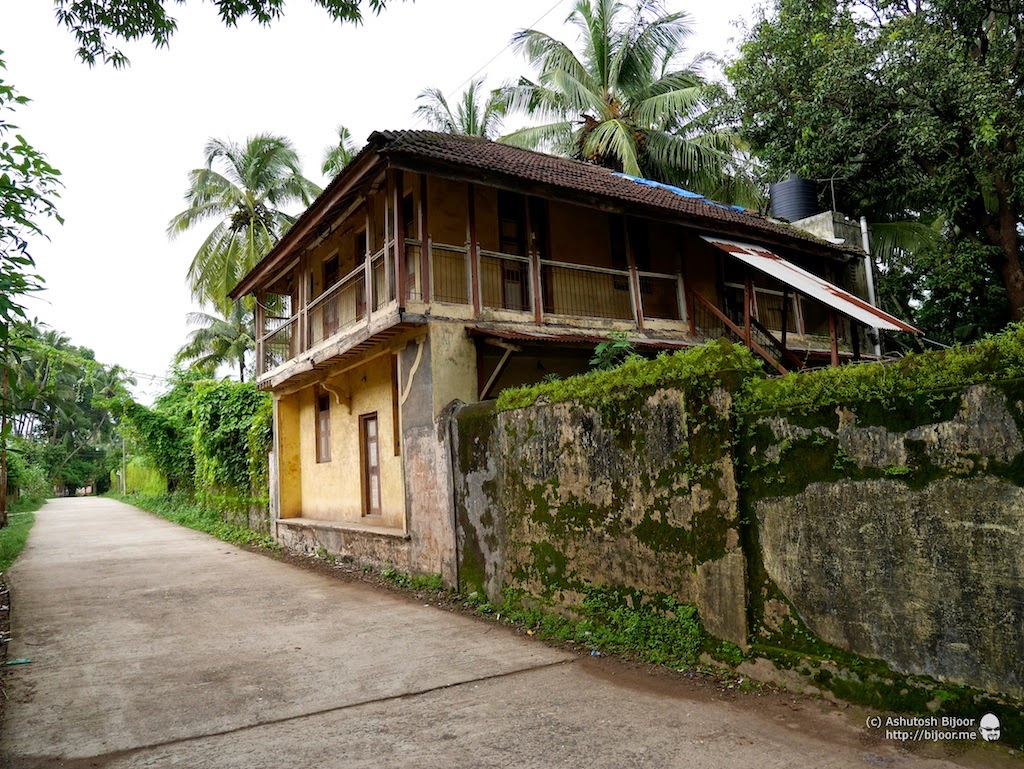 After returning the keys to the fort, I started out to the last leg of my journey from Tarapur to Boisar – the nearest railway station to Tarapur – about 12 km away from the fort. As I rode through the village, I was wondering how long the charm of the old houses would last… 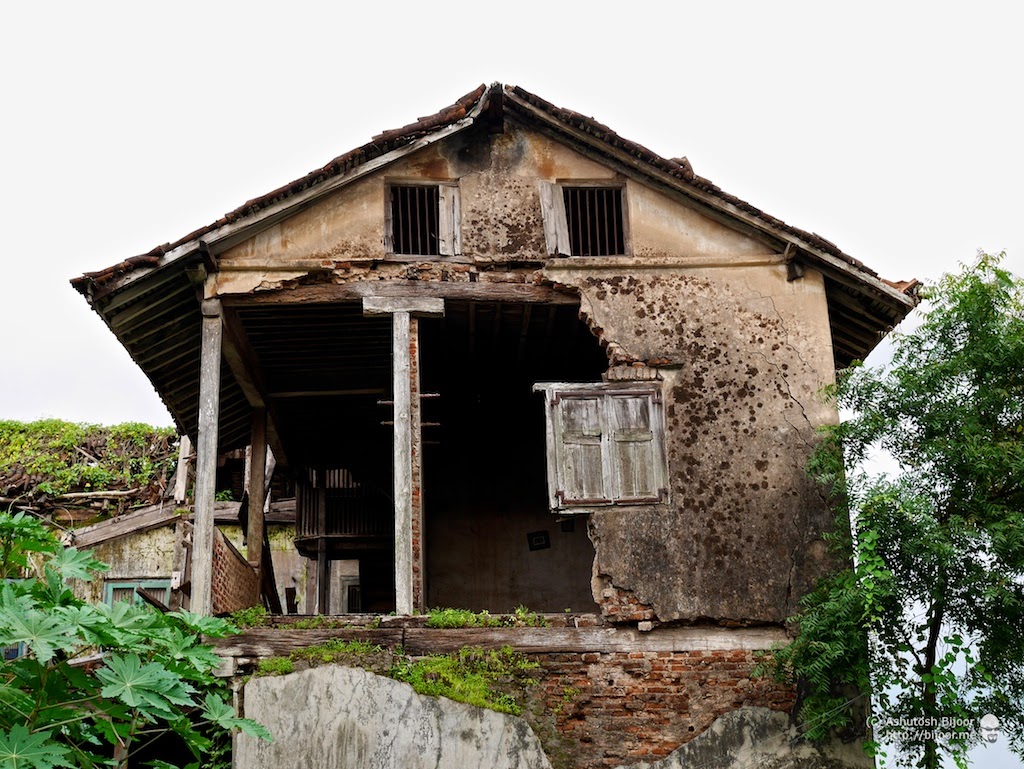 … and sure enough, I soon came across one such old house being torn down to build new high-rise buildings – sad, but inevitable I guess – for maintaining the old houses is expensive and unaffordable to the villagers who own them.

This is the route I took – from Andheri via Western Express Highway, crossing Vasai bridge to NH8 till Charoti junction, then turning left on Dahanu-Jawhar road till Dahanu, then the coastal road to Tarapur and from there to Boisar station. Total cycling distance of about 155 km

A special thanks to JP Shetty, a fellow cyclist who suggested a trip to Charoti to see the Mahalakshmi Temple there, and some caves nearby – that on further research turned out to be Bharot Caves, located between Dahanu and Bordi. For he could not join in, I ended up visiting the two forts instead.