Pelhar Lake is located just off the National Highway 8 towards the east at Vasai. Surrounded by gentle hills of the Tungareshwar National Park, the lake is an ideal picnic spot, and is frequented by residents of the towns located nearby such as Nalasopara and Vasai.

The dam was constructed across a tributary of the Abma river in 1975. The dam is 26 meters high and 701 meters long, and provides over 10 million liters per day (MLD) of fresh water to the Vasai-Virar area.

Pelhar lake is to the north west corner of the Tungareshwar National Park. The other attractions in the national park are the Chinchoti Water falls, and the Kamandurg Fort 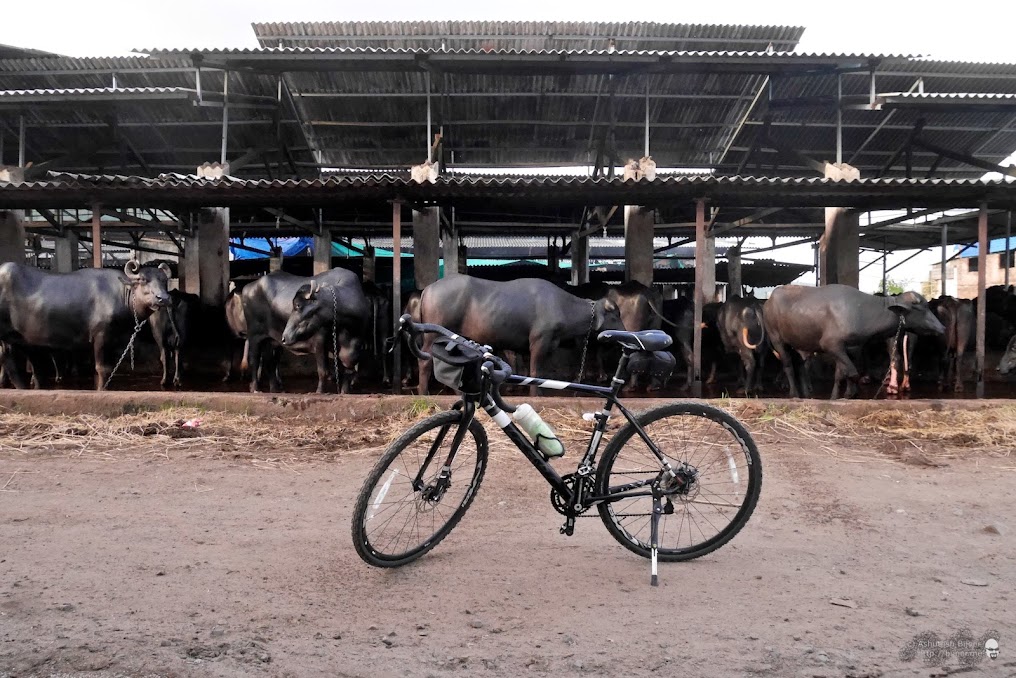 I started early at 5 am from Andheri and rode continuously till Nalasopara. From the map, it was not clear if there was a way to go to the lake from Nalasopara. So I went ahead to Pelhar village and took a small road due east from the highway. As soon as I turned off the NH8, the small muddy road was surrounded by buffalo farms or “tabelas”. As I stopped to click a photograph, the buffaloes looked curiously at me. 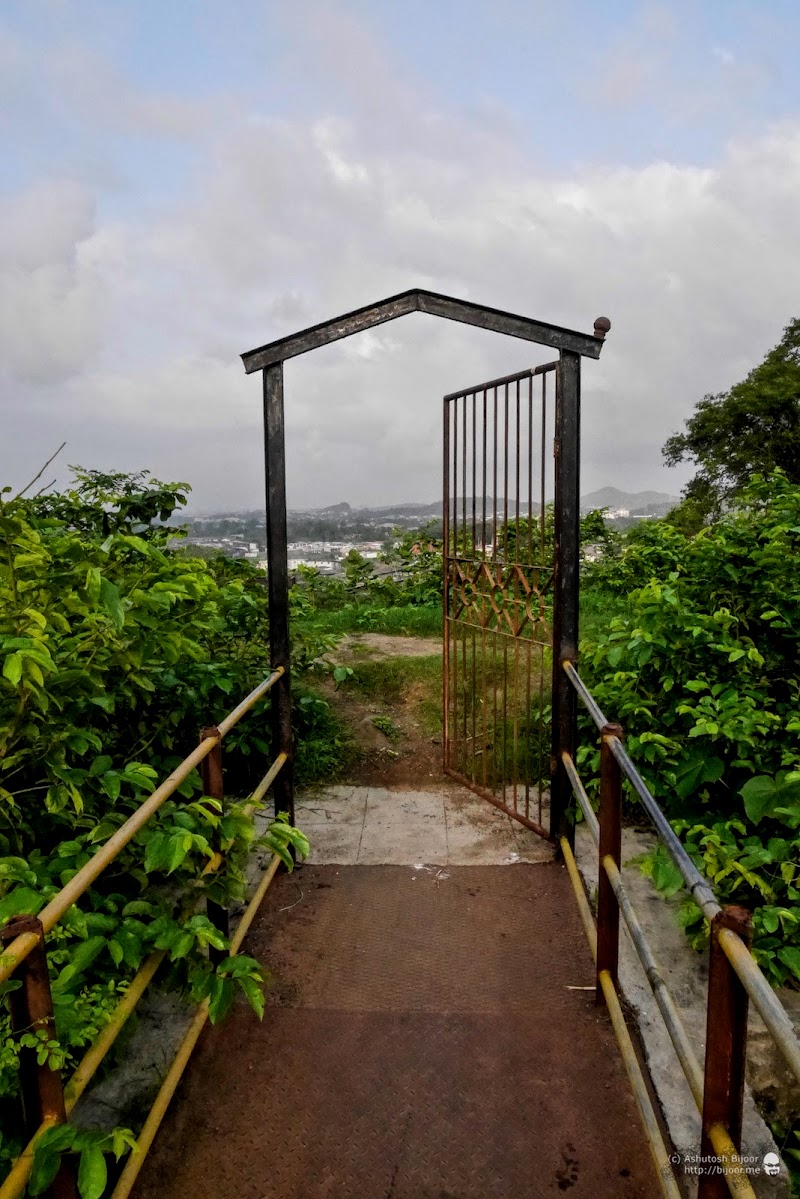 I lost my way a couple of times, but the villagers were helpful in pointing me in the right direction. Finally I entered the reservoir area through a small gate, where a security cabin lay unoccupied. The dam itself is a 26 meter high wall, and once you climb the partially broken steps up the wall, you come across this gate that leads to the release gate of the dam 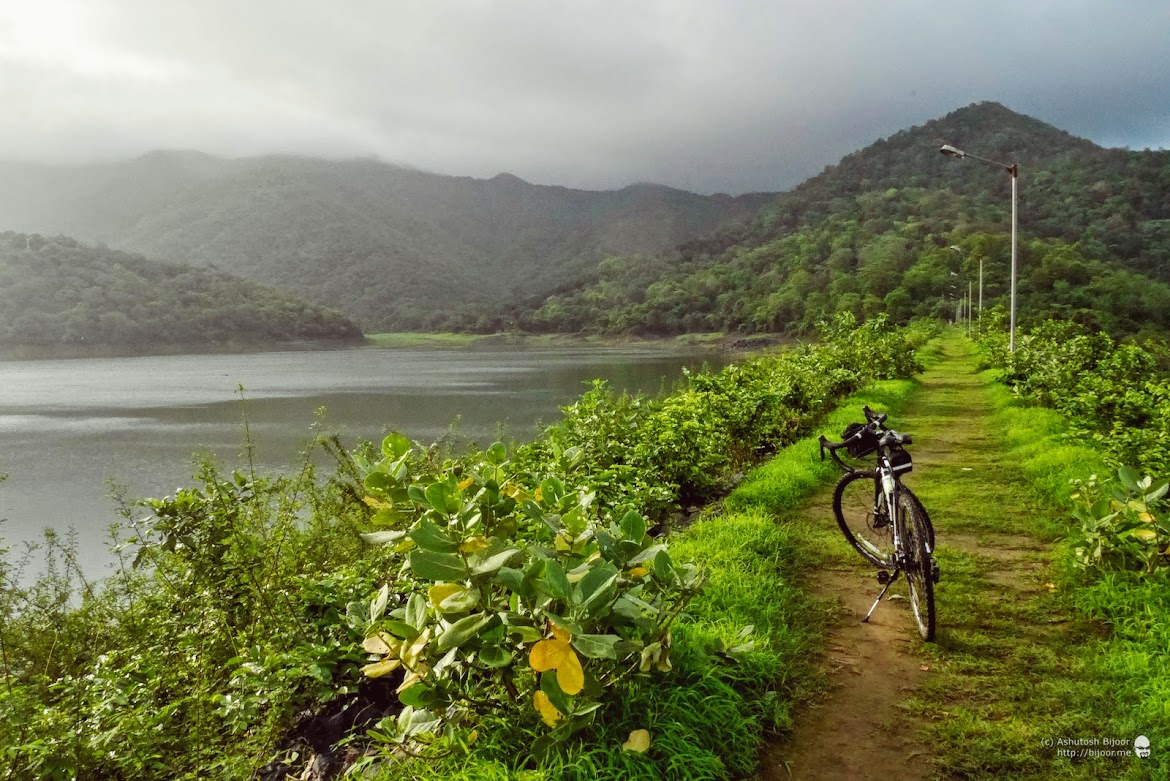 On top of the dam wall is a small path that leads from one end to the other. Thanks to the monsoon, it was lined on both sides with fresh green grass, shining with the rays of the rising sun. There are street lamps on one side of the path, and thick bushes on the other, preventing visitors from climbing down to the water 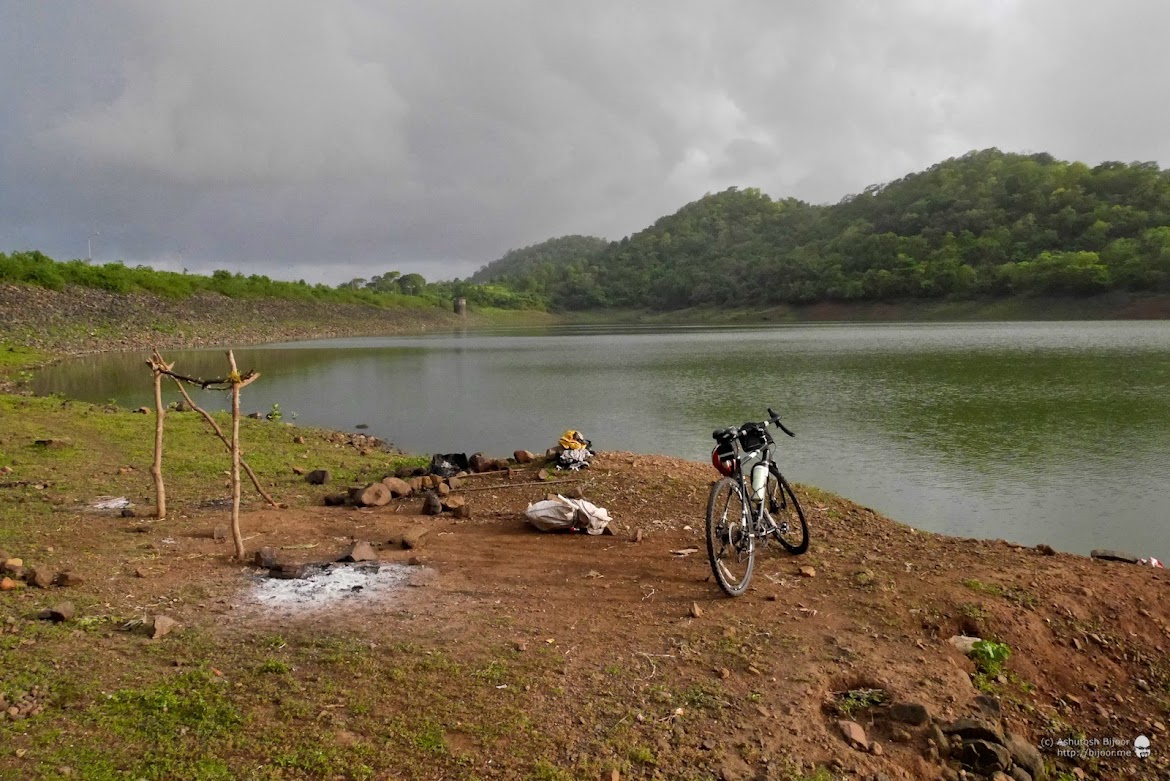 At the far end of the dam, there is a path that leads down to the water front. When I reached there, I found a small camp site where two villagers had stayed overnight, and they were now in the water fishing 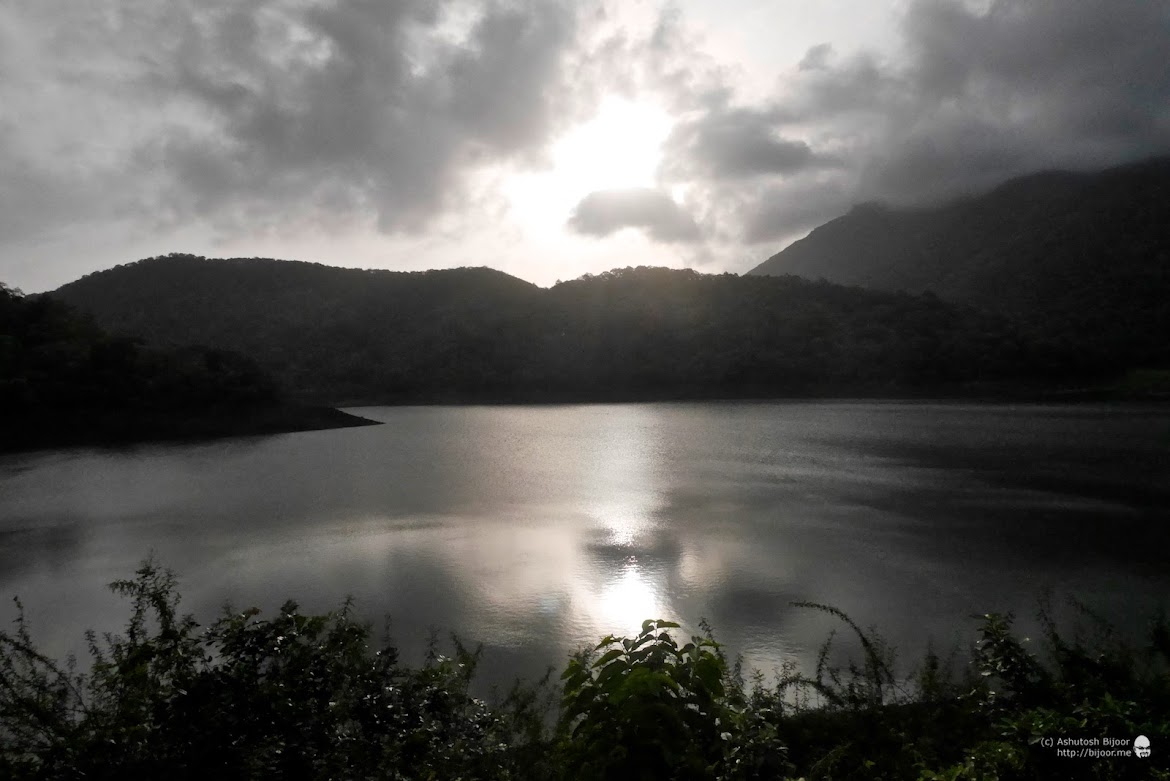 Freeze time… Not a soul in sight, just the sound of a cool breeze blowing over the water, making it shiver and yearn for the warmth of the sun, while dark clouds overhead prevent the rays of the sun from getting through. 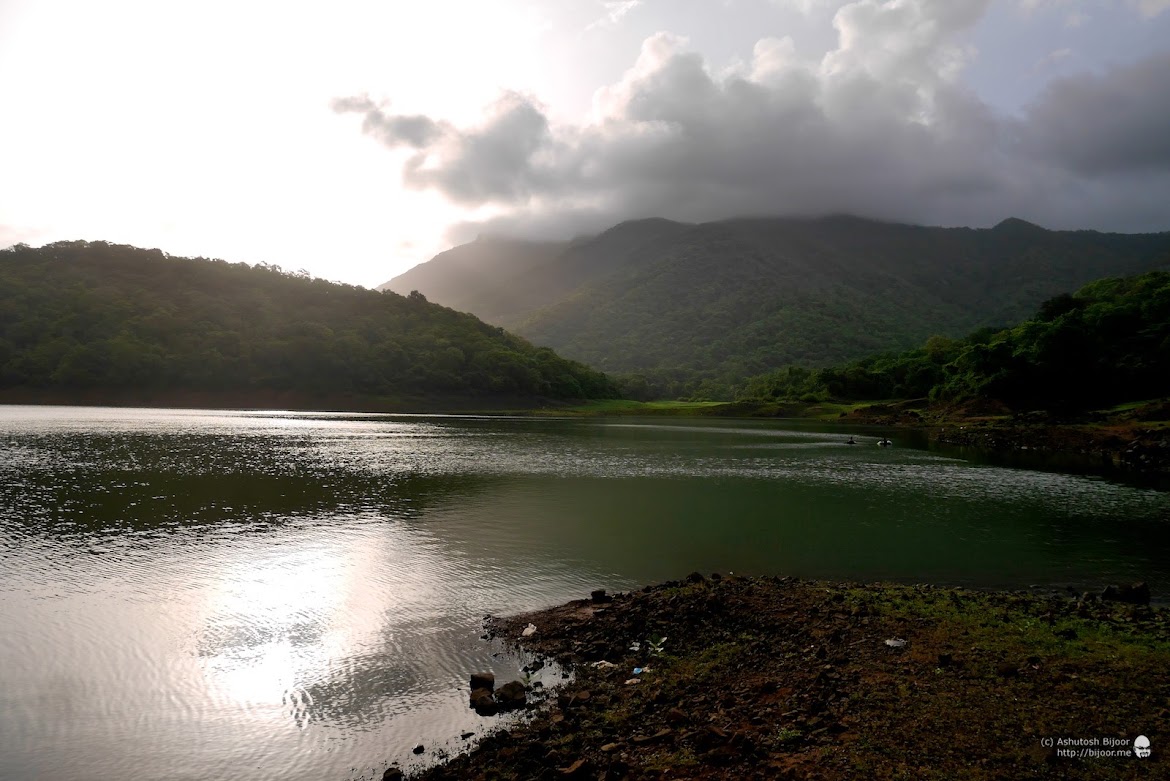 Though there were dark clouds covering the morning sky, other than a small drizzle it was primarily dry. It could get hot once the sun was out, but at this time of the day (7 am) it was nice and cool. If you look carefully, you will find the two villagers fishing in the lake 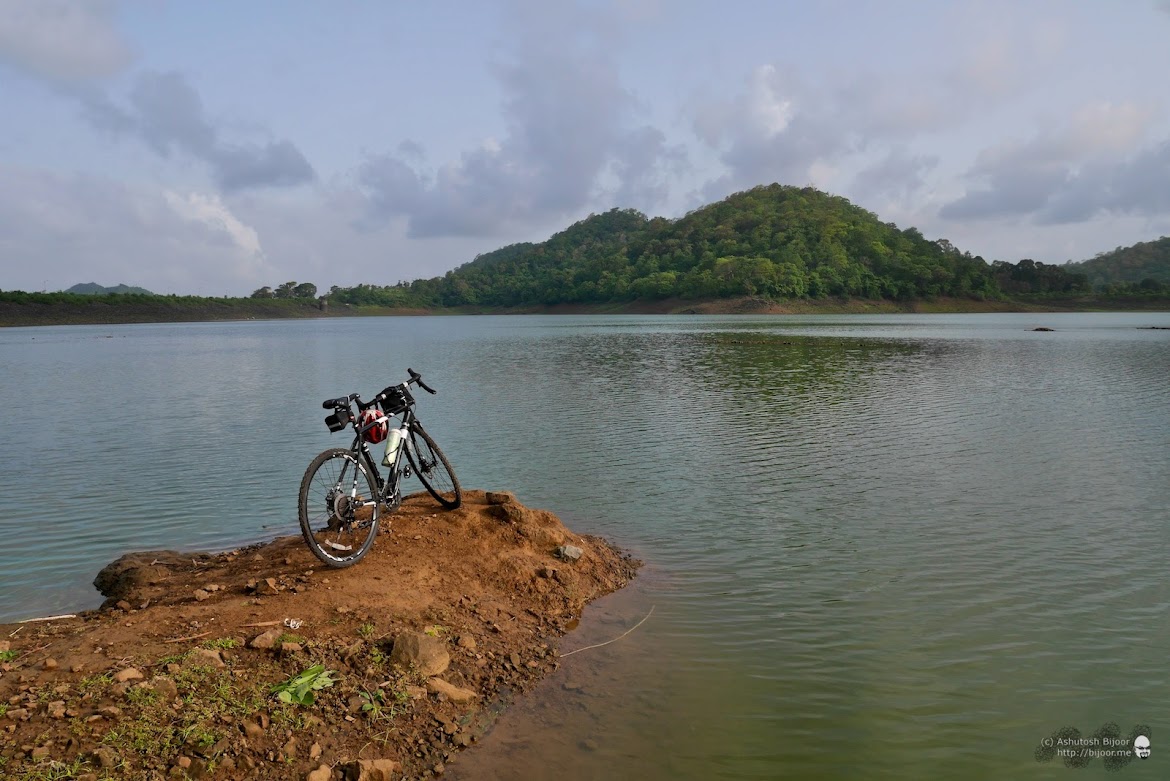 As I walked around the lake using a small path that skirted the water, I came across a few outcroppings like this one… a perfect place to just sit and admire the beauty of the lake 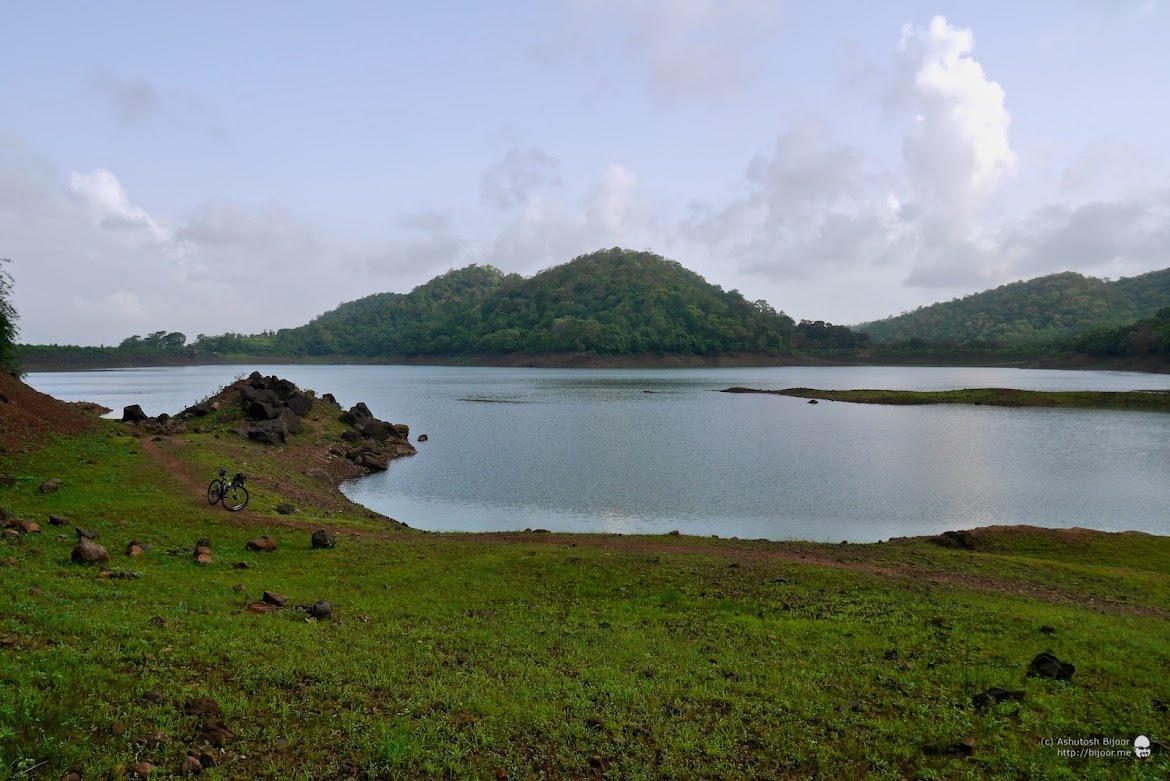 Half way around the lake, there was a slightly open area that could make a perfect spot to pitch tents. This could be a great camp site for an overnight stay with an early morning trek to Tungareshwar or Kamandurg to complete the adventure 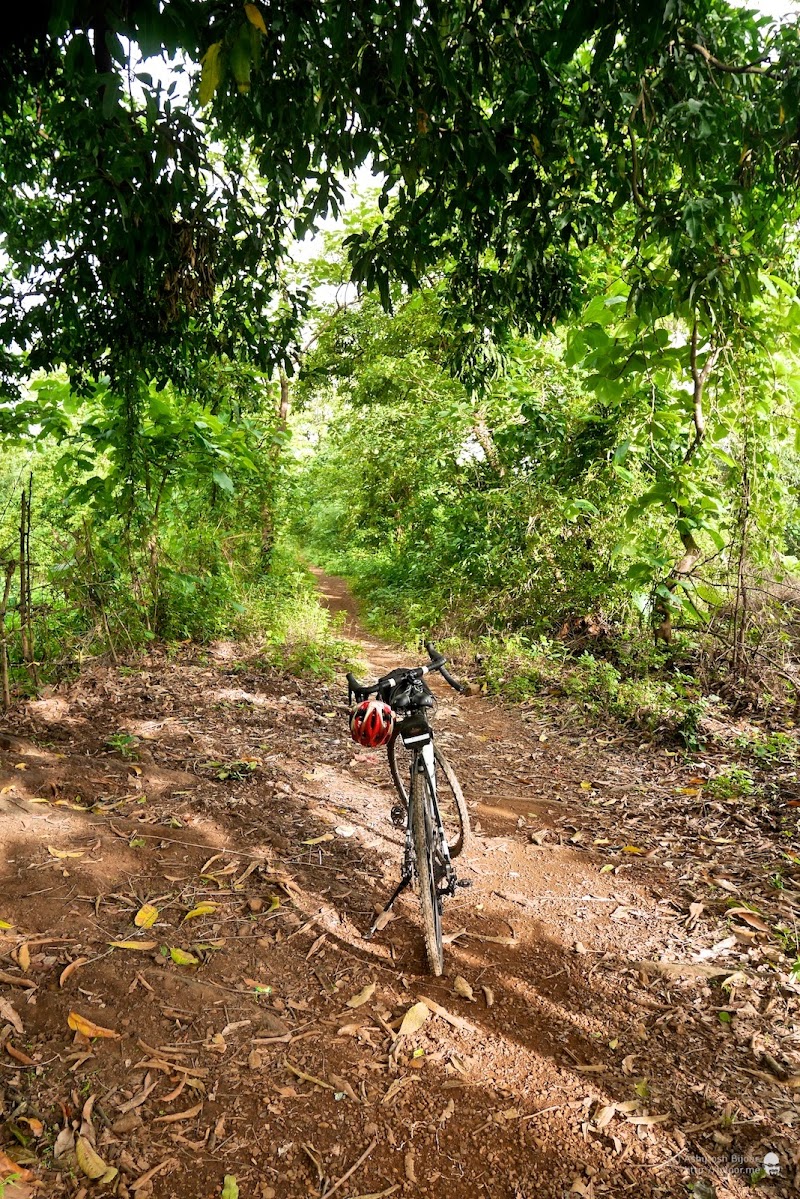 After spending about an hour walking around the lake, I headed back to the dam and found a small path leading down. Thanks to my cycle being a cyclocross, I dared to cycle down this path and found that this lead to a road that emerged at the Nalasopara junction on NH8.

This is the route I took – from Andheri via Western Express Highway till Vasai junction, then off to the east towards the lake. On the way back, I forgot to restart the GPS and so missed the initial route, but then tracked the return journey via Nalasopara junction. The entire round trip ride was about 87 km/p>

Some tips in case you decide to venture to this place: