Byculla, a bustling area in South Mumbai is famous for the Zoo, and the Bhau Daji Lad museum located in it. But just across the road is another lesser known landmark located inside the Central Railway Hospital compound – the Bharat Ratna Dr. Babasaheb Ambedkar Memorial Hospital. It is an old building and normally one would easily miss it. But its impressive architecture has an interesting story behind it! 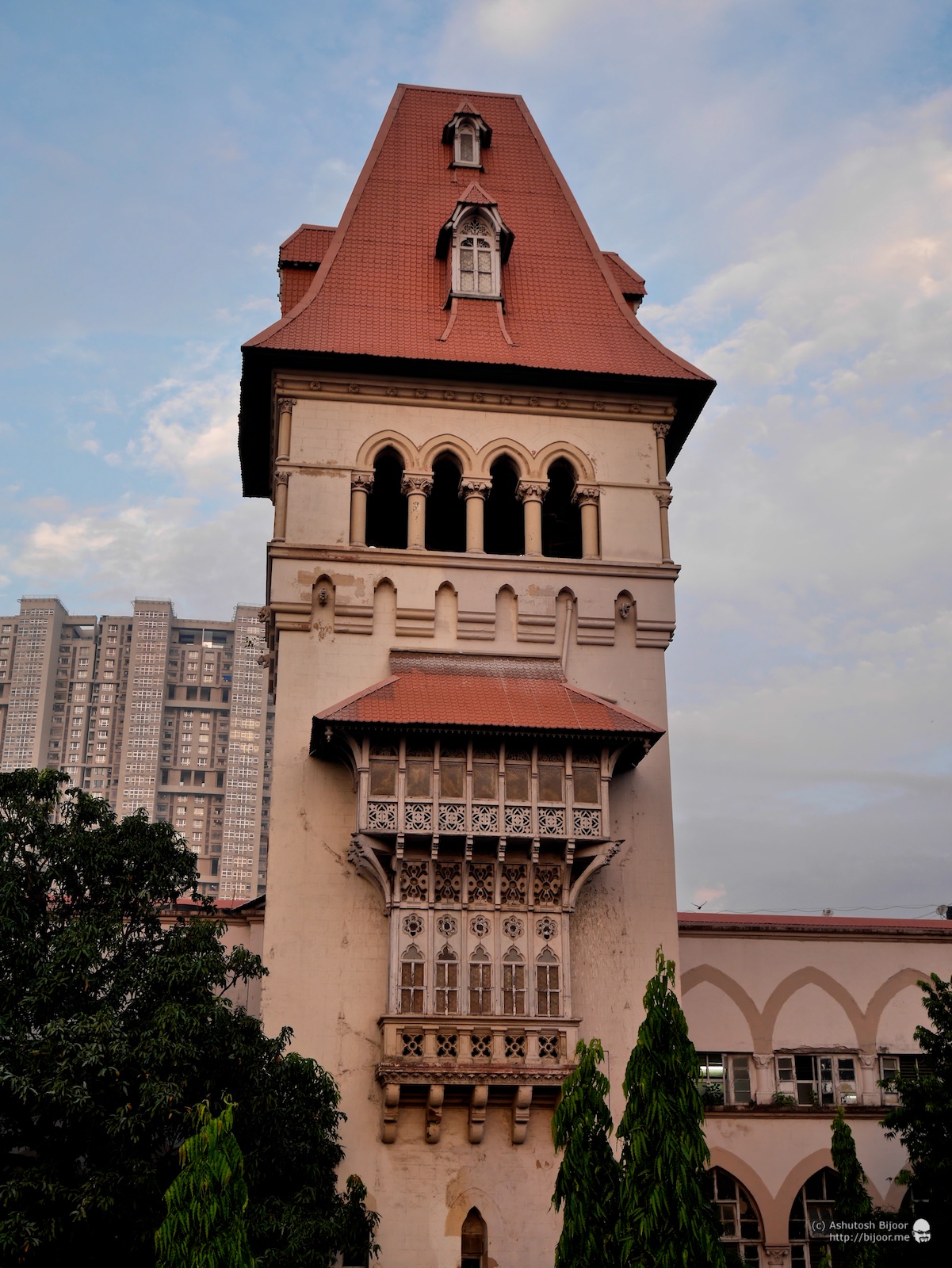 If you drive over the Lalbaug flyover, you cannot miss the tall tower that protrudes out of the tree cover to the west. I noticed it when I was cycling over the flyover during one of my weekend cycling sojourns. I happened to ride early in the morning when the sun was just rising, and while I was on the flyover, I saw this beautiful tower to the west, and had to stop to admire it.

The building is located right opposite the Byculla Zoo and Bhau Daji Museum, just off Eastern Express Highway – or Dr. Ambedkar Road over which the flyover runs. 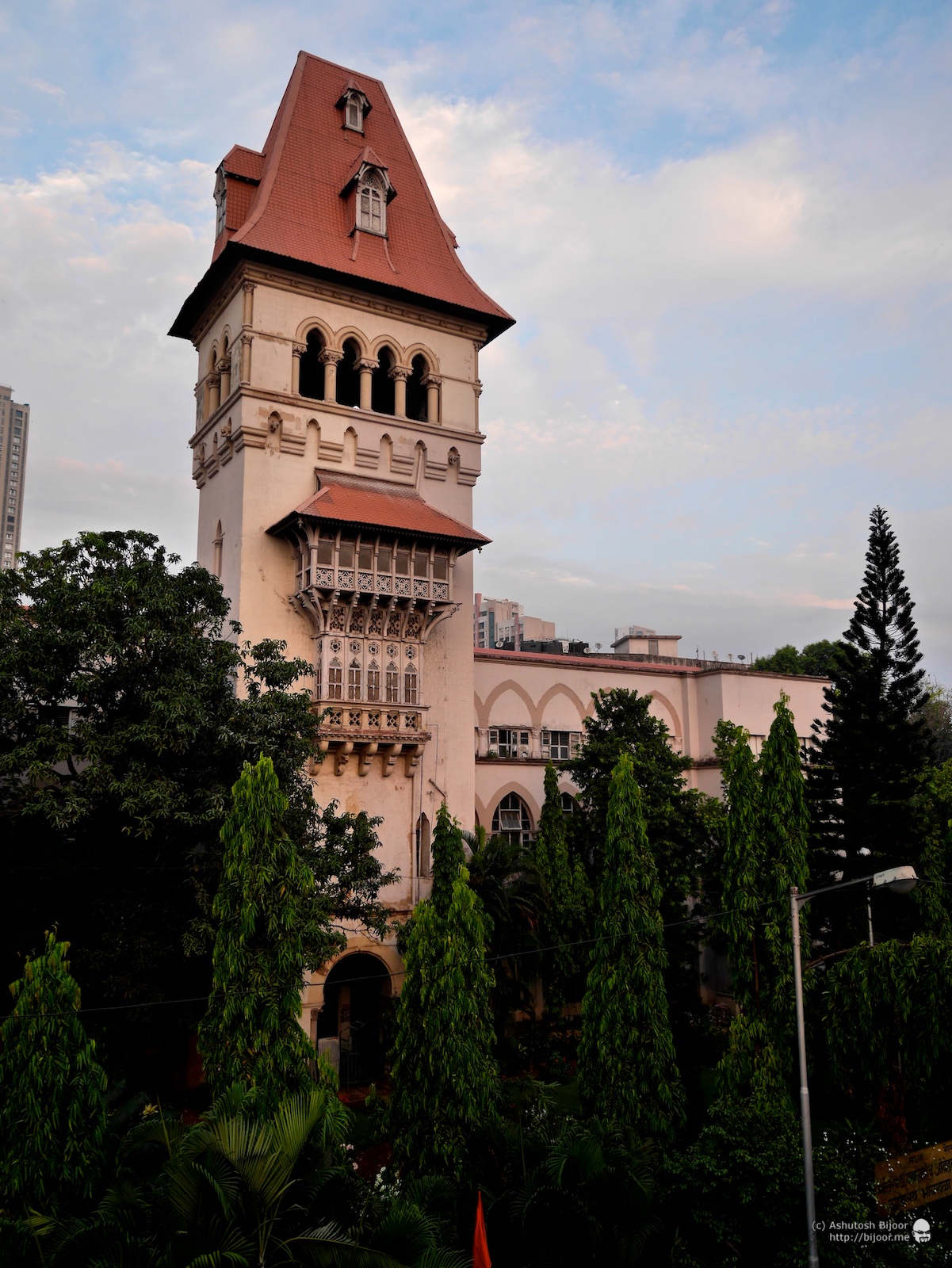 The rest of the building is still hidden behind the trees, but the tower’s imposing tiled roof, the arched hallway under it, the immaculately decorated balconies are striking in their architecture 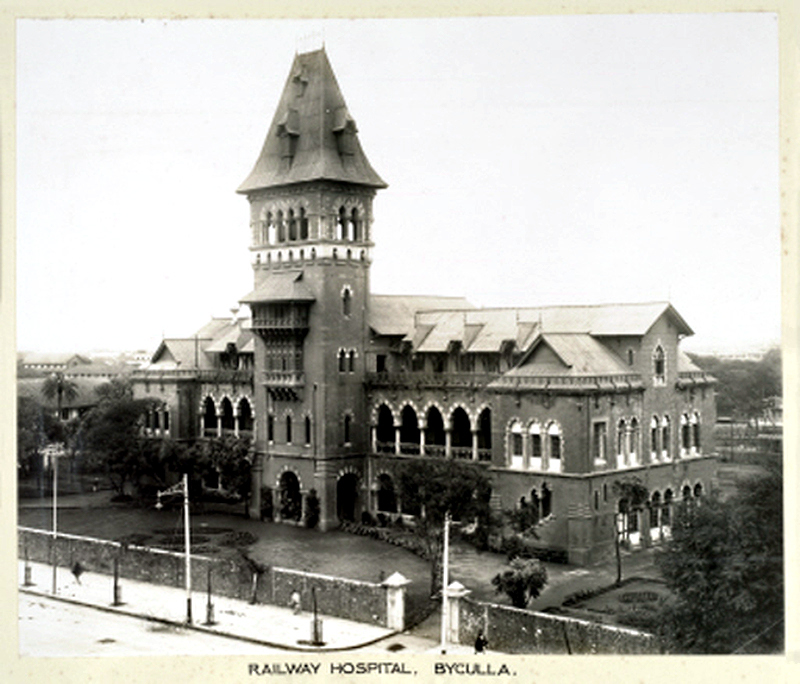 Curious about this imposing structure, I did a bit of online research and found this old photo of the building taken around 1930. Apparently it was used as a hospital for the workers of the Great Indian Peninsula Railway – the predecessor of the Central Railway (ref,ref). Note the well manicured garden in front of the building, and the trees that are still short and do not cover the front of the building as they do now. 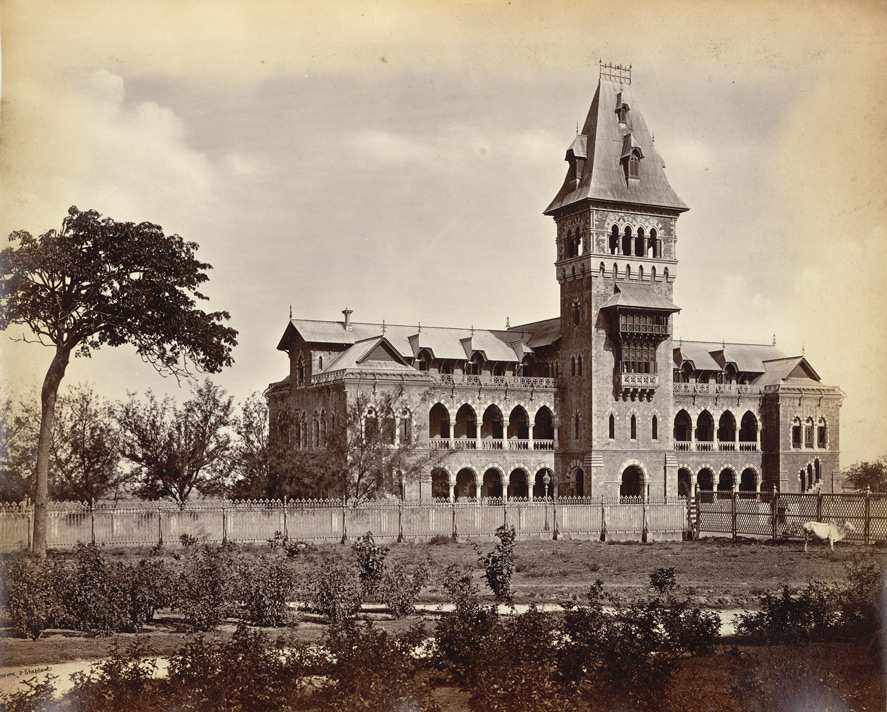 But I found something even more interesting… the building was actually constructed in the 1860s – a few years after the Byculla station (1857 – ref). And the original intention was to start the famous Elphinstone College. This photograph, apparently part of the collection of the Archeological Society of India (ASI) was taken by Bourne and Shepherd in 1870. Elphinstone College was planned and built in the 1860s and was opened to the public in 1871. The college was named after Governor Mountstuart Elphinstone, the Governor of Bombay from 1819 to 1827 who is responsible for creating the administrative framework of the Western Presidency (ref). Note the evenly planted rows of trees planted outside the compound wall, and the lone cow standing nonchalantly. This must have been barren marshy land on which the building must have been built. 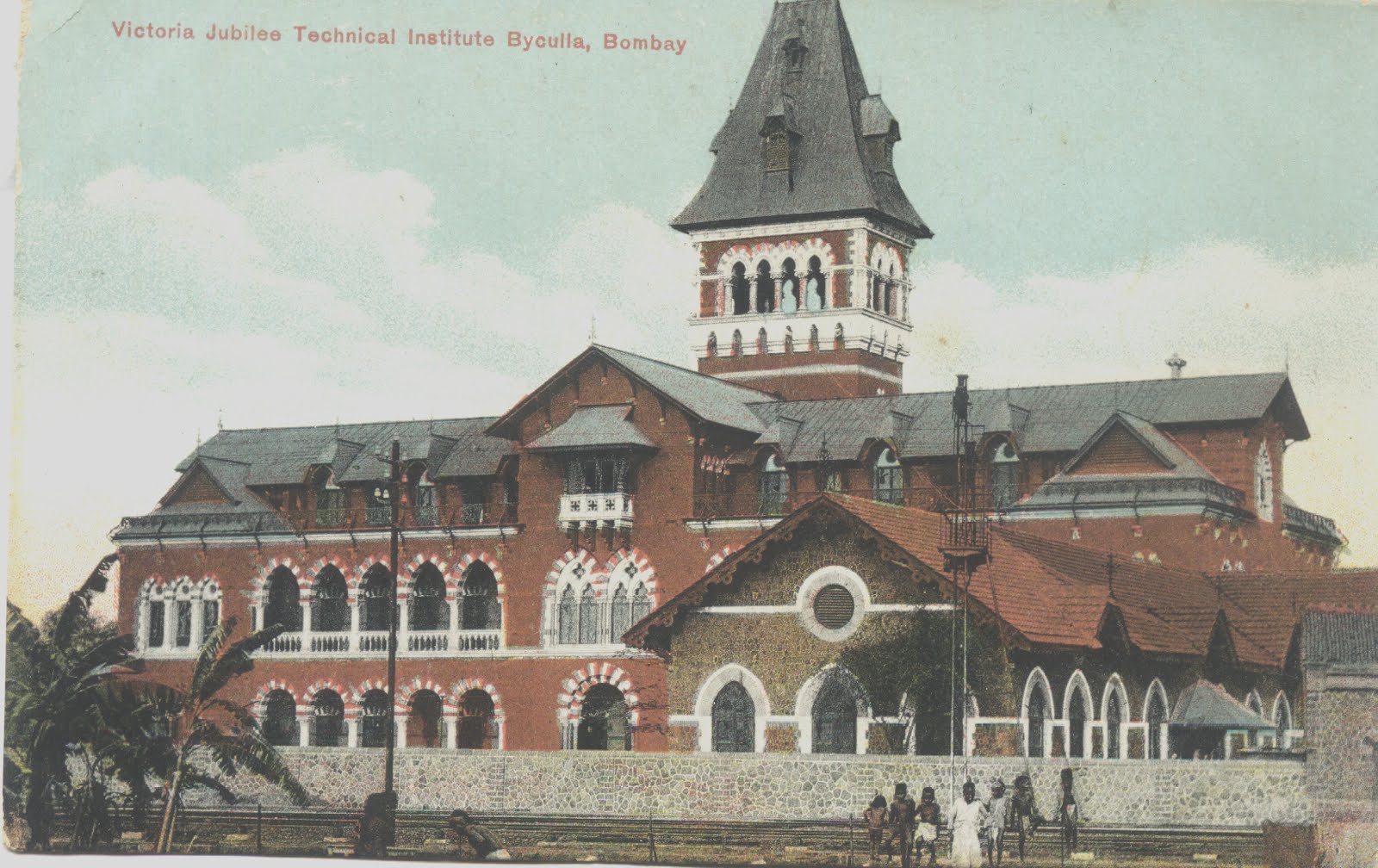 Another interesting fact! The same building served as the initial location of the well known Victoria Jubilee Technical Institute (VJTI) (ref). Established in 1887, VJTI initially began with only two departments, namely the Sir J. J. School of Mechanical Engineering and the Ripon Textile School for the two branches of industry in which Bombay was vitally interested at the time. In the early days, the Institute was housed in Byculla, in a building donated for the purpose by the Sir Dinshaw Maneckji Petit. In the course of development, the Institute’s building at Byculla proved insufficient for the growing number of students who sought admission and soon after the First World War, in 1923, the Institute moved to its present and more commodious, specially constructed building at Matunga, which represents the most important landmark in the history of the Institute (ref) (Thanks to Kaeven Umrigar for pointing this fact out!) 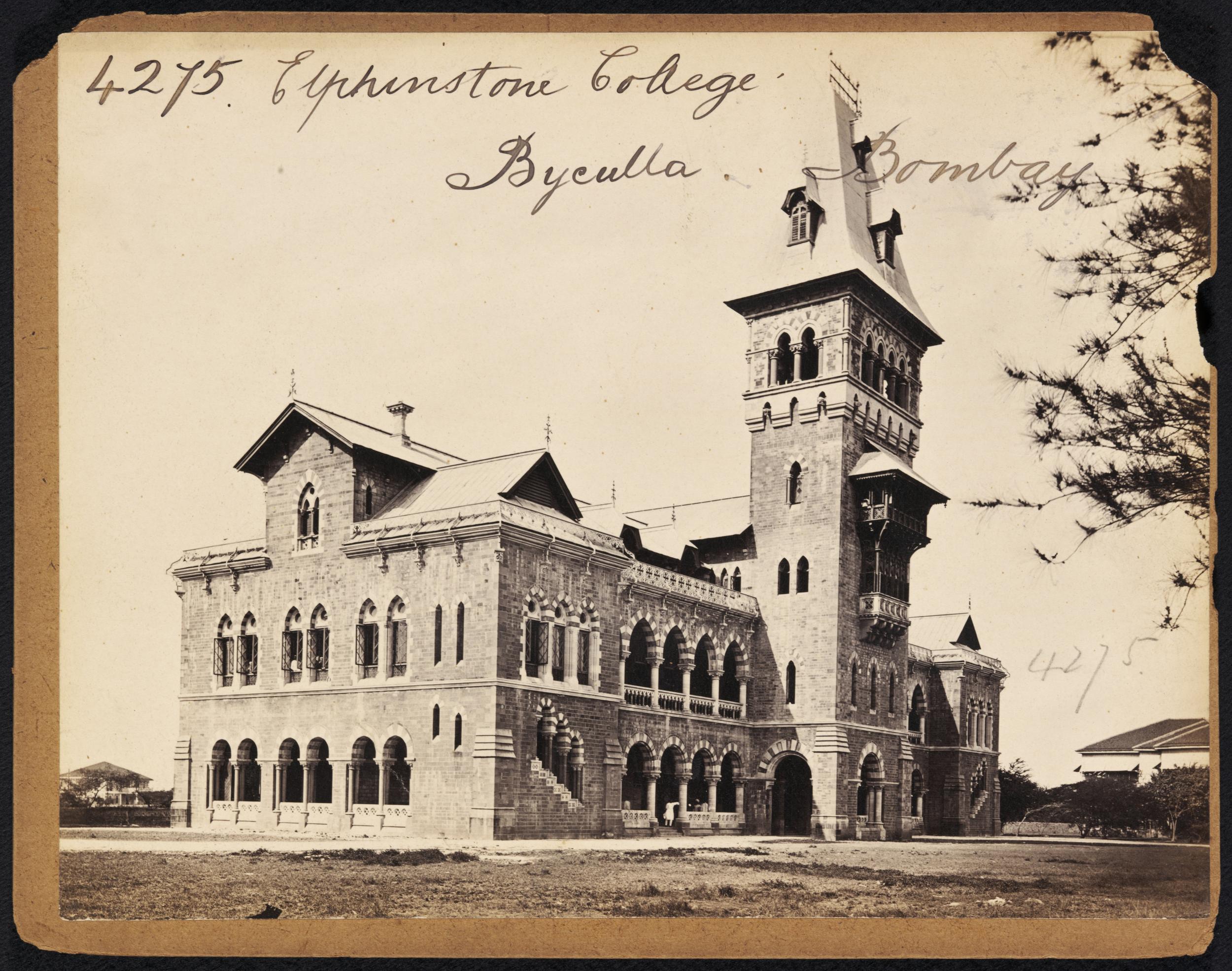 This is another photograph taken of the same building by Francis Firth & Co around the same time – between 1860 and 1870, with a view from inside the compound.(ref). The compound is barren and undeveloped at this time. Compare it to the well manicured garden that is seen in the hospital photo above. 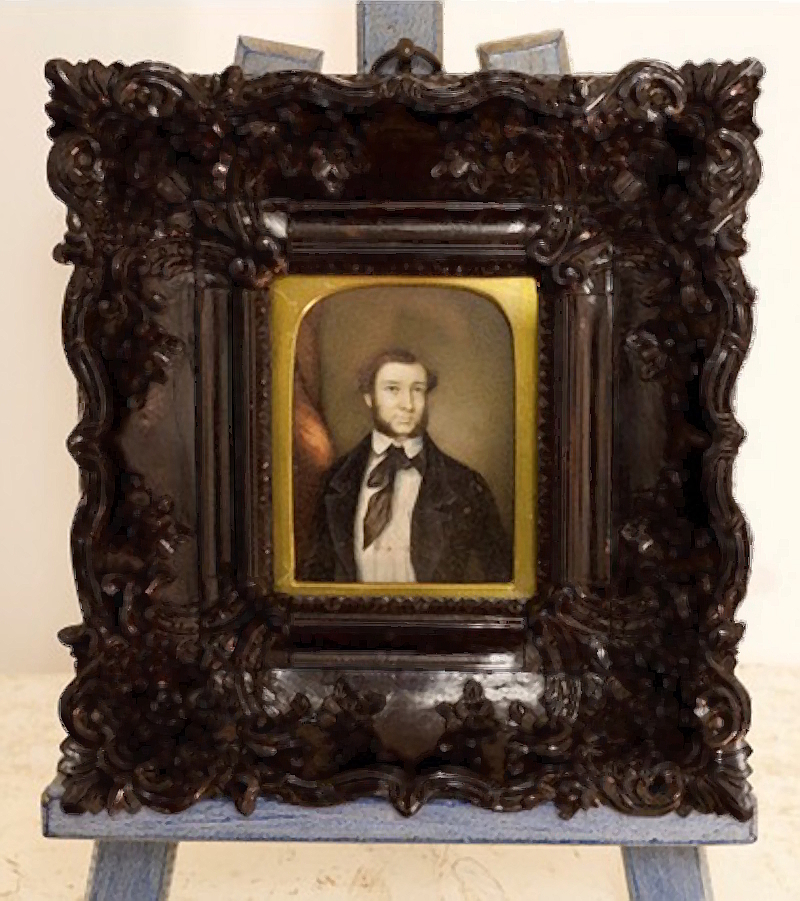 The building was designed by the architect James Trubshaw(e) in 1860 (ref). An architect with the same name designed the newer building that was built two decades later in 1880 where Elphinstone College now operates from (ref), as well as the building housing the University of Pune (ref). James Trubshaw(e) hails from a famous dynasty of builders and architects from Staffordshire. The photo here is of his father, also sharing the same name (ref,ref) 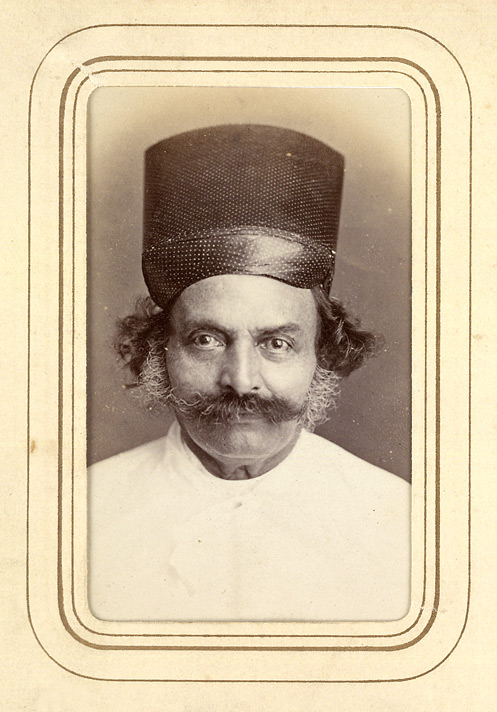 The funds for the construction of both buildings were provided by the generous donations by Sir Cowasji Jehangir, who came from a wealthy Parsi family who pioneered the lucrative opium trade with China and earned the sobriquet “Readymoney,” which they later adopted as a surname. Sir Cowasji Jehangir Readymoney was made a Justice of Peace for Bombay and donated money to build colleges, hospitals and other facilities in the island town.(ref) 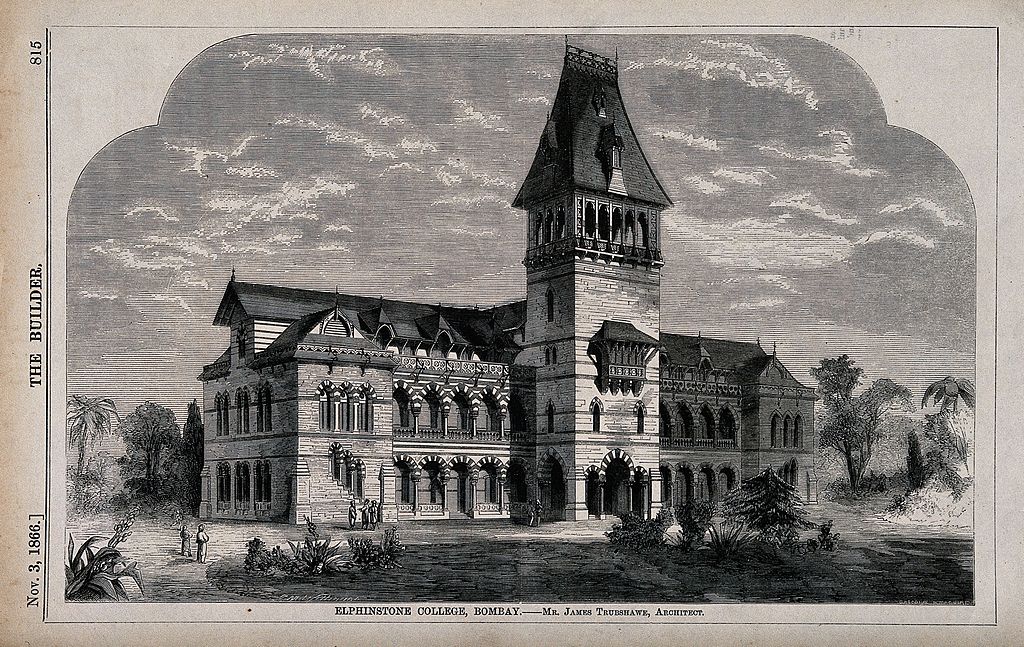 This illustration made by James Trubshaw(e) of the building was featured in the magazine “The Builder” in 1866 (ref). It shows how detailed the design was and how accurately the actual building is implemented from the design – all this in an age with relatively primitive technology 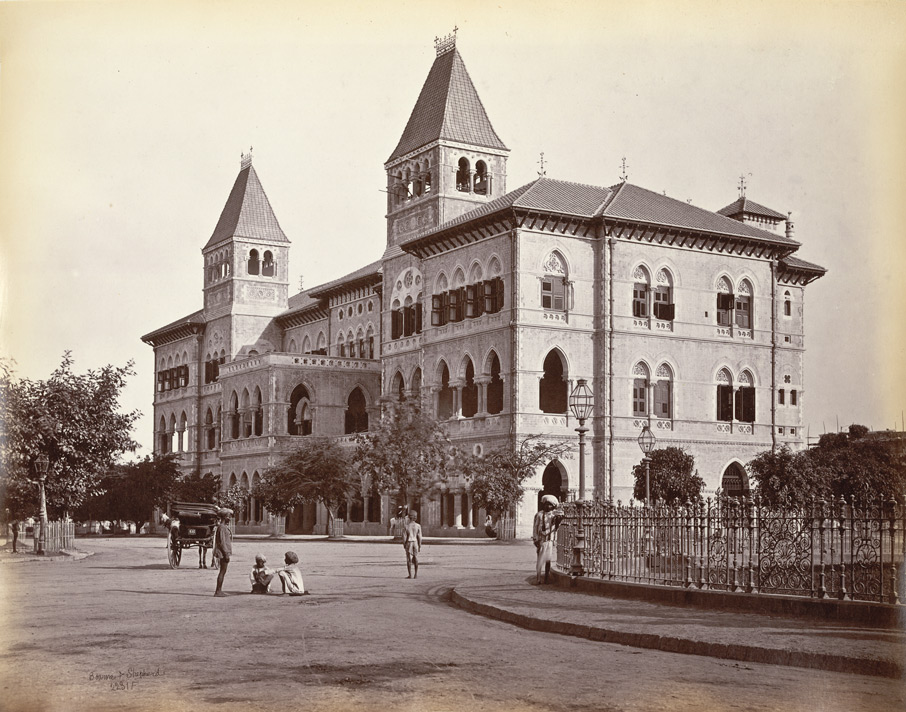 This photo (ref) of the erstwhile General Post Office constructed from 1869 to 1872 was also designed by James Trubshaw(e) along with W. Paris. Note the similarity in design of the tower to that of the tower of the Railway Hospital! This building now serves as the Central Telegram Office

What started as a couple of photographs I took while cycling one weekend turned out to be an interesting expedition into the history of a monument! Hope you enjoyed the journey!