Aksa beach is located along the mangroves near Malad. The entire mangroves stretch from Versova to Malad is only accessible via a ferry that you can cross over at Versova jetty to reach Madh.

For a longer route, one can continue further from Marve by taking a ferry across to Manori and then cycle via Gorai to Uttan. One of the favourite cycling routes for the city!
END_OF_DOCUMENT_TOKEN_TO_BE_REPLACED

2012 was a great year for my cycling adventures. Here are some photographs I tool this year.

An ideal holiday destination if you enjoy the sea and Thai food, with quaint villages and dense forests all around.

I believe that every kind of institution — business or otherwise — today carries not just a social responsibility, but an existential responsibility. A responsibility not just to society — but to life itself; and further, to the art of living. An obligation to elevate what’s worthy, good, and true in every life; a duty not just to “serve” people as “consumers,” but to better people as humans; a calling not merely to “deliver” — but to matter. 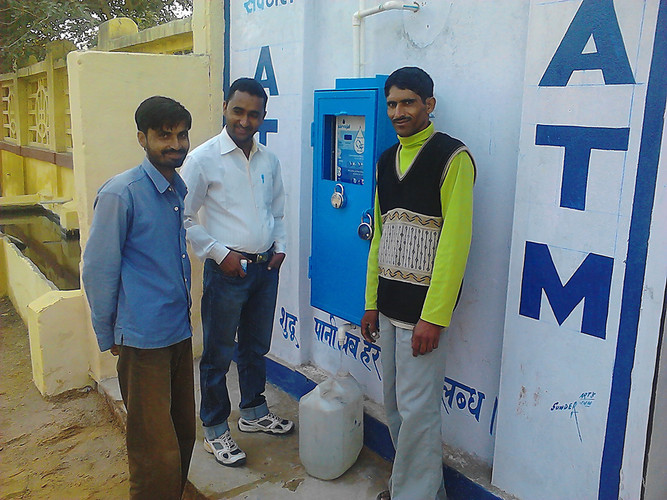 Anand Shah’s company Sarvajal is working to bring clean water to India. But it’s not just giving it away. Instead, it’s Each of these franchisees sets up “water ATMs,” where rural Indians can go and see their water being purified and bottled.

How can you resist a salesman like this one ?

A visit to my daughter’s St. Xavier’s College gave me a great opportunity to admire the colonial architecture 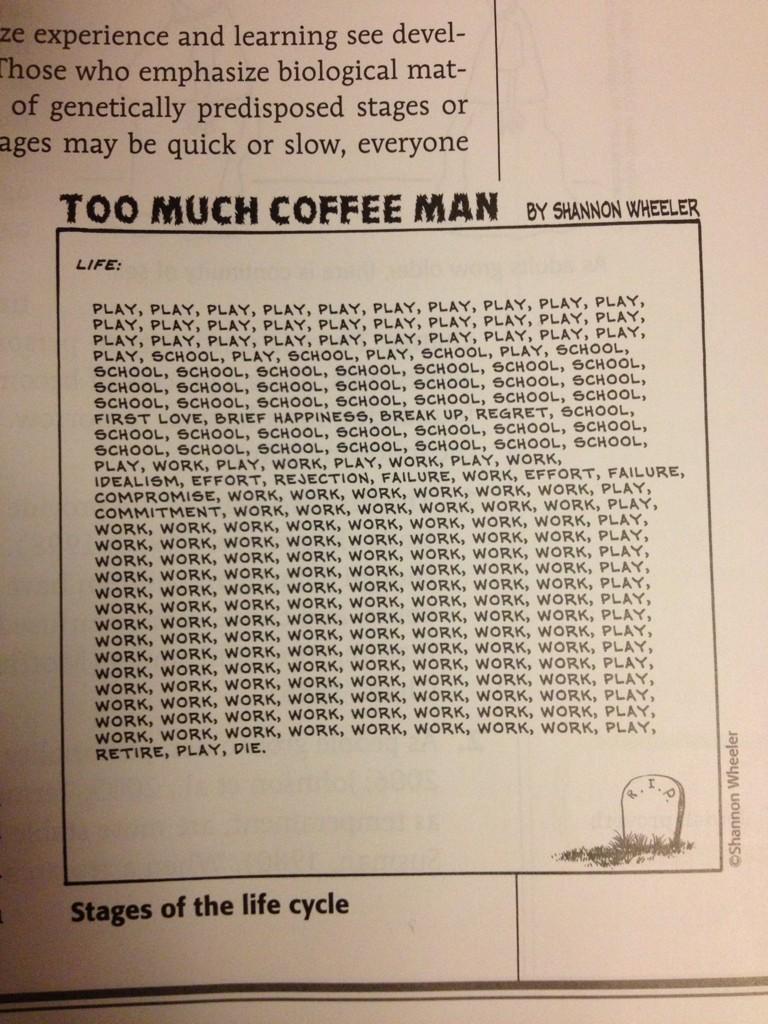 what my friend found 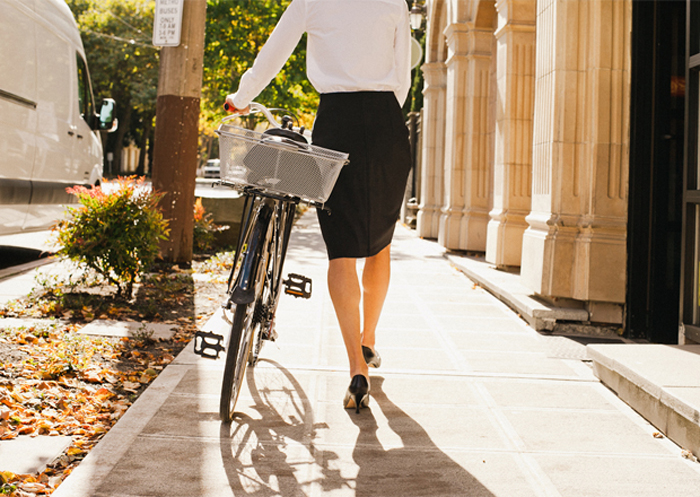 Ann DeOtte’s designs solve a basic problem: Can you bike in comfort and dress with style?

Her clever answer is Iva Jean, a line of functional clothing for women cyclists that works on and off your ride. DeOtte’s pieces employ just a few clever nips and tucks to seamlessly transition from road to office.

Take the Reveal skirt, pictured above. The tailored skirt unzips in the back to expose additional fabric for easy pedaling, and features a high-waisted cut for comfortable coverage. It’s safety first and fashion forward at the same time — and it’s also our Project of the Day.

An amazing film about an amazing project. Truly inspiring journey of a group of people who started off with barren land that was murdered by chemical farming and transformed it into a green haven that sustains the local farmers and makes their farming commercially viable

Science is for everyone, kids included! – one of the best TED videos I’ve seen!

What do science and play have in common? Neuroscientist Beau Lotto thinks all people (kids included) should participate in science and, through the process of discovery, change perceptions. He’s seconded by 12-year-old Amy O’Toole, who, along with 25 of her classmates, published the first peer-reviewed article by schoolchildren, about the Blackawton bees project. It starts: “Once upon a time … “

My sister, her kids and her friend had planned an exciting holiday to Dubai. All preparations were done methodically – she’s good at that – and they landed at Sahar airport at the prescribed 3 hours before the flight. However, an unexpected turn of events was in store – the immigration authorities saw the print-out of the Dubai visa taken online and said that it was not clear enough and that they would not accept it – they needed a better print out. But being a Sunday, all cyber-cafe facilities at the airport were shut. They were stuck in a royal mess! Desperate for help, she called me from the airport and explained the situation. Unfortunately, there was not enough time for me to take a print out and reach the airport in time. I looked up the web to search for cybercafes near the airport. The first listing was:

I called the number provided and it was answered by a young boy named Vikas. I explained the situation to him. He said that he was alone at the shop but there were no customers – and he could walk to the airport in about 10 minutes. I asked my sister to email the visa to him from her phone, and Vikas took the print out and went to the airport to hand it to them just in time for them to make it to the flight.

But to top it all, he refused to accept any money beyond the normal Rs. 20/- that he charges for the print-out of two pages!

Vikas made my day today, and saved an entire holiday of my sister’s, her kids’ and her friend’s – in one gesture of kindness. 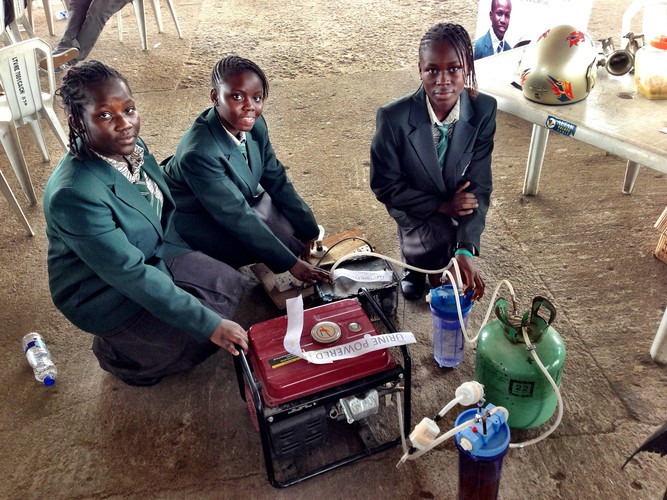 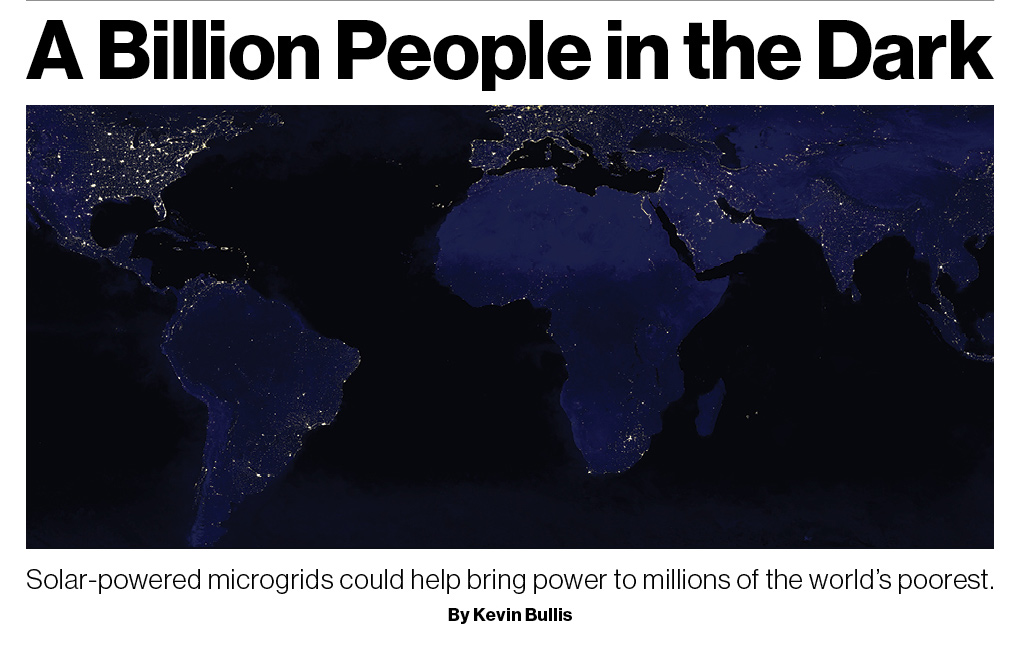 Tanjung Batu Laut seems to grow out of a mangrove swamp on an island off the coast of Malaysian Borneo. The houses, propped up over the water on stilts, are cobbled together from old plywood, corrugated steel, and rusted chicken wire. But walk inland and you reach a clearing covered with an array of a hundred solar panels mounted atop bright new metal frames. Thick cables transmit power from the panels into a sturdy building with new doors and windows. Step inside and the heavy humidity gives way to cool, dry air. Fluorescent lights illuminate a row of steel cabinets holding flashing lights and computer displays.

The building is the control center for a small, two-year-old power-generating facility that provides electricity to the approximately 200 people in the village. Computers manage power coming from the solar panels and from diesel generators, storing some of it in large lead-acid batteries and dispatching the rest to meet the growing local demand. Before the tiny plant was installed, the village had no access to reliable electricity, though a few families had small diesel generators. Now all the residents have virtually unlimited power 24 hours a day.

The first two numbers in the Fibonacci sequence are 0 and 1, and each subsequent number is the sum of the previous two. Here is a neat animation that demonstrates the growth of the sequence of numbers: A Colorado company sees the future of tires on mountain bikes, and they are puncture-proof and airless. Britek Tire and Rubber also envisions mountain-bike riders as being in a far happier mood when they learn they can leave their patch kits and pumps at home. For several years the company has focused its prototyping efforts toward airless tires for automobiles but it is now turning its attention to working on airless tires for mountain bikes. Company founder and designer Brian Russell has several patents and more pending for his dream project, the Energy Return Wheel (ERW). In addition to not having to worry about punctures, he says people will find that ERW can deliver better efficiency.

Airless wheels for mountain bikes may ditch patches and pumps 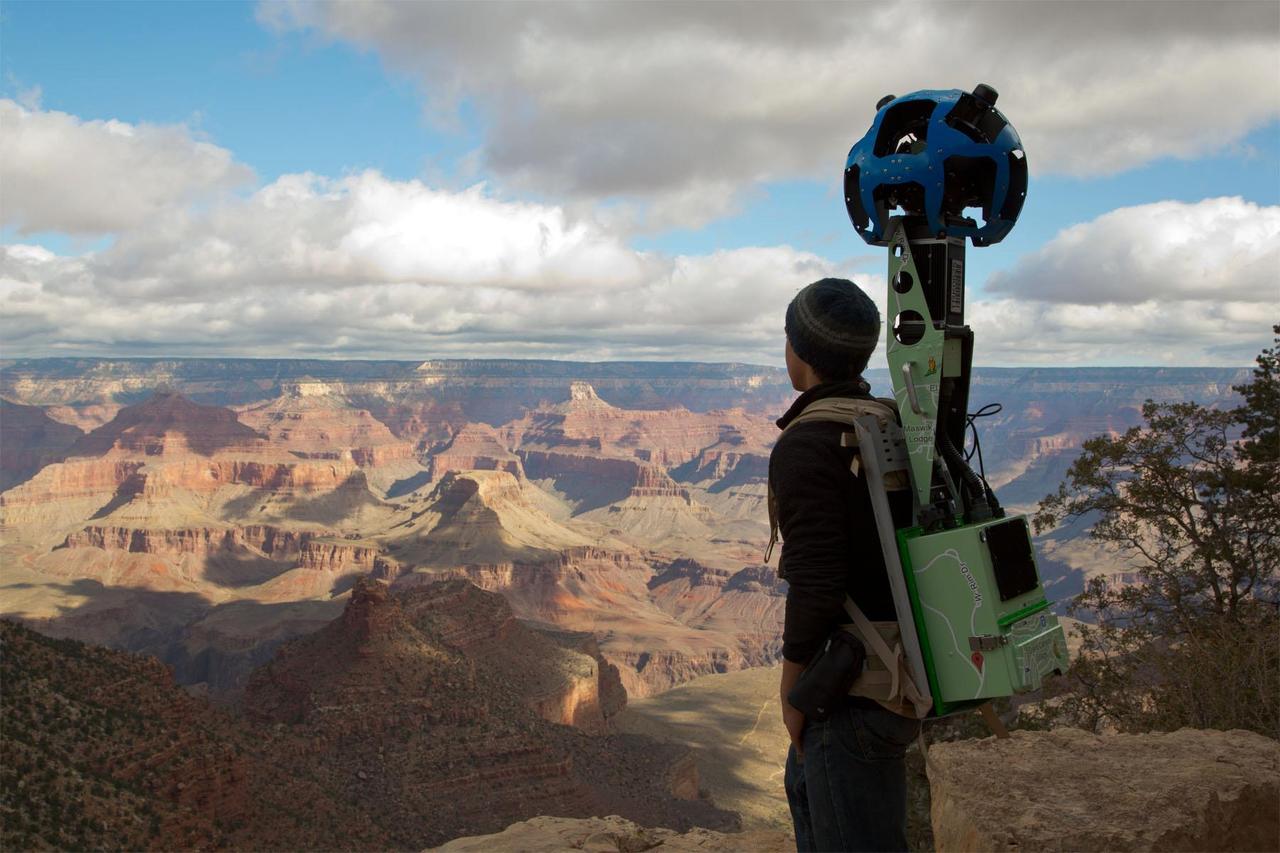 On its first official outing, the Street View team is using the Trekker—a wearable backpack with a camera system on top—to traverse the Grand Canyon and capture 360-degree images of one of the most breathtaking natural landscapes on the planet.

This week, photos are being gathered from portions of the South Rim at Grand Canyon National Park, including the ridge, the famous Bright Angel Trail, South Kaibab Trail, and more. These panoramic views will soon be live on Google Maps, giving everyone from real-life visitors to armchair travelers the opportunity to marvel at this beautiful, majestic site from the comfort of their computers or mobile devices.

Ikea is setting itself up as a role model for sustainable business by announcing it will invest €1.5 billion in solar and wind power to ensure it is totally self-sufficient by 2020.

When the furniture company was founded its motto was to do things as cheaply and efficiently as possible (and of course, to create designs with simplistic Swedish style intact). Twenty-five years on and it now has outlets in 41 countries. Engineering a sustainable model, whereby the company can continue to keep costs low for both the consumer and the firm rather than competing with rising energy prices, is the logical next step.

Speaking to Reuters, the company’s chief executive Mikael Ohlsson said the move was sure to drive innovation in the industry and beyond. The “People and Planet Positive” campaign will see the €1.5 billion (£1.2 billion) spent on building on Ikea’s existing solar and wind farms to deliver 70 percent of the global firm’s energy by 2015, with total self-sufficiency slated for 2020. The target seems achievable, considering the 342,000 solar panels on its outlets and factories already generate 27 percent of its total energy. Add to that the fact that Ikea has wind farms in six countries across Europe and the fact that, since 2009, it has already invested half of that €1.5 billion figure, and it looks like the long-term strategy has been in the works for some time.

That strategy also includes planting as many trees as it uses in its furniture production by 2020, buying half its wood supply from Forest Stewardship Council (FSC) certified forests, selling energy efficient products like induction cookers, using LED lights across the company (which, it says, will cut emissions equal to those produced by the Netherlands), ensuring its other bought-in products are sustainable and helping supply clean water to the areas its factories are based. 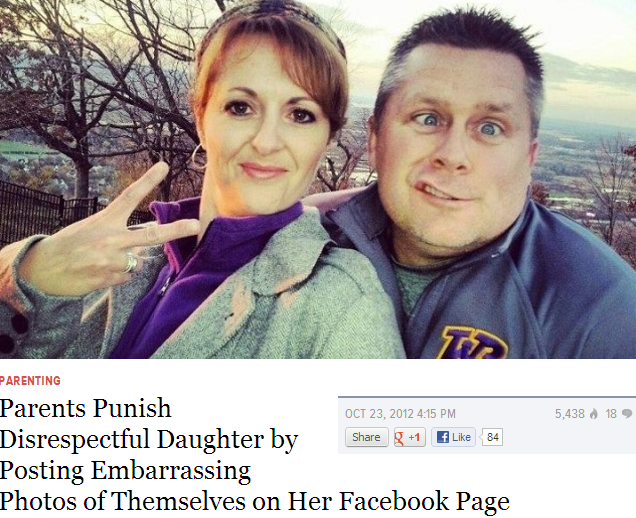 These are some very forward parents. I think they’re my new heroes.

A pair of Wisconsin parents took a decidedly modern approach toward punishing their daughter when she misbehaved recently: They confiscated her phone and used it to take several photos of themselves doing silly faces, which they subsequently uploaded to her Facebook page.

The best, worst parents ever. 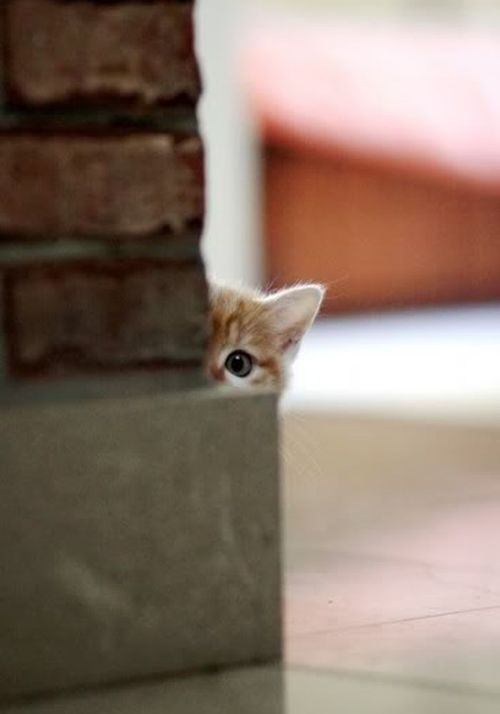